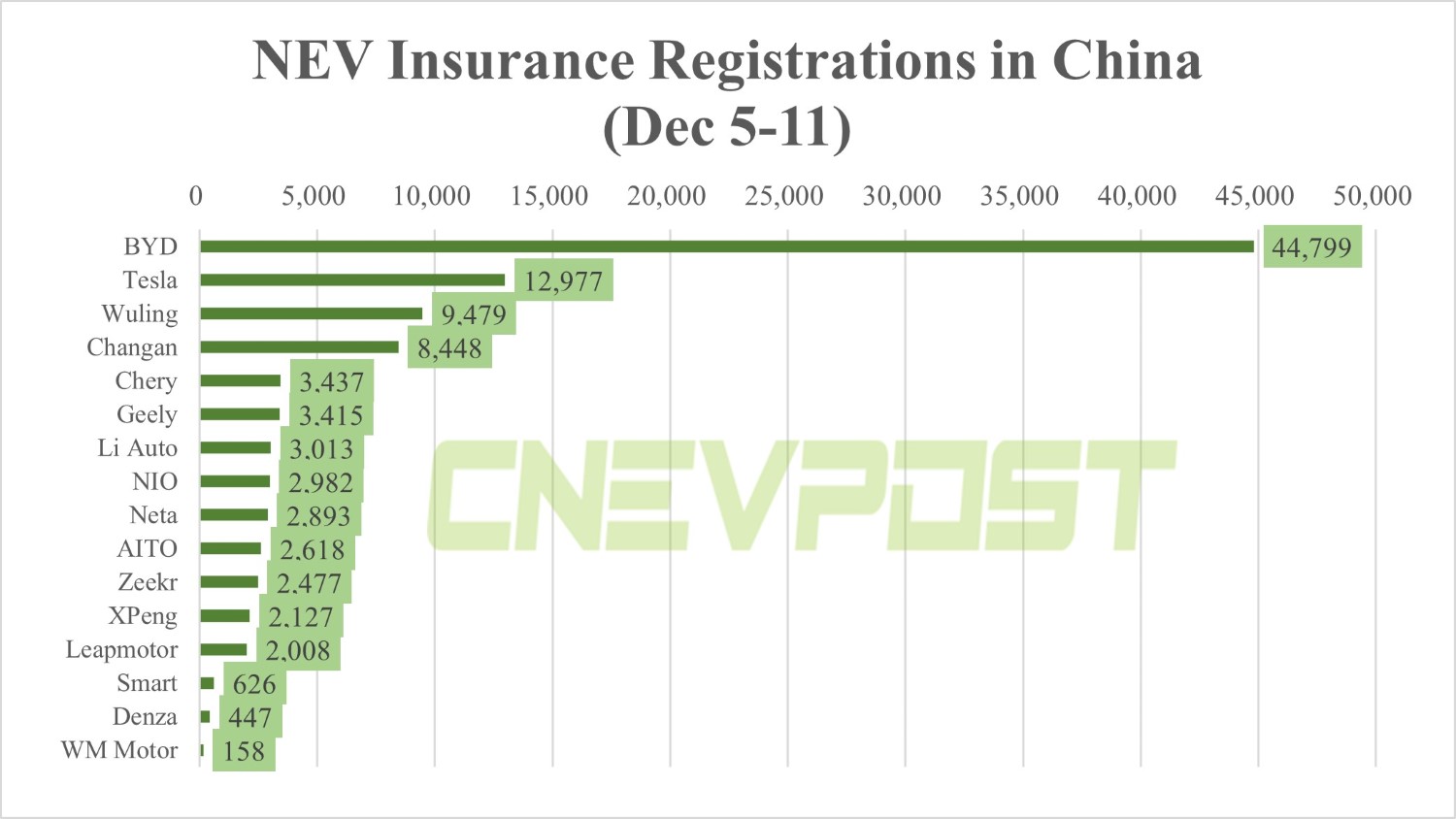 China's new energy vehicle (NEV) insurance registrations increased in the second week of December compared to the previous week, although the performance of major EV makers did not appear to differ much from the previous week.

Between December 5 and December 11, sales of NEVs in China, in terms of insurance registrations, were up 45.7 percent to 140,000 units, up 8.8 percent from the previous week, according to figures shared by auto blogger Zhu Yulong on Weibo today.

Sales of all passenger cars in China were 462,000 units that week, up 7.7 percent year-on-year and up 19.3 percent from the previous week.

Of those, sales of conventional internal combustion engine vehicles were 322,000 for the week, down 3.2 percent year-on-year but up 24.6 percent from the previous week.

NIO's guidance for fourth-quarter deliveries was 43,000 to 48,000 units when it announced its third-quarter earnings report on November 10. The company delivered 10,059 and 14,178 vehicles in October and November, respectively, and the guidance means NIO would have to deliver at least 18,763 vehicles in December to reach the lower end of the guidance range.

Notably, NIO announced yesterday that its 300,000th production vehicle rolled off the line. The company's co-founder and president, Qin Lihong, said at an event that delivery of NIO's 300,000th vehicle is expected to be around January 1.

Considering that NIO's cumulative deliveries reached 273,741 units as of November 30, this means the company is expected to deliver about 26,000 units in December.

However, judging from the figures of the first two weeks, NIO's deliveries will need to be significantly boosted in the next three weeks if it is to reach this target.

On November 1, Li Auto founder, chairman and CEO Li Xiang said on Weibo that the company will aim to achieve a single monthly revenue of more than RMB 10 billion within 2022.

On November 30, XPeng gave Q4 delivery guidance of between 20,000 - 21,000 units in its third-quarter earnings report. The company's management said at the time that it expected November deliveries to be no less than 5,800 units, implying that December deliveries were expected to return to a level of around 10,000 units.

Deliveries will increase significantly in December as production of the G9 ramps up under normal operating conditions, XPeng said in announcing the November delivery figures on December 1.