While the beginning of the month is usually slow for the auto industry, Li Auto's apparent lagging performance behind its peers may have raised some concerns.

Li Auto fell 7.02 percent to $30.87 as of Tuesday's US stock market close. For comparison, NIO was down 4.96 percent, XPeng was down 1.6 percent and the Nasdaq Golden Dragon China Index was down 1.66 percent.

There was no significant negative news about Li Auto on Tuesday, and the sell-off by investors may have been due to insurance registration data showing the company's unusually weak performance in the first week of August.

Li Auto vehicles had just 800 insurance registrations from August 1-7, down 74 percent from the previous week and down 55 percent from the first week of August last year (July 26-August 1, 2021), data shared by Weibo car blogger @痛快舒畅 showed. 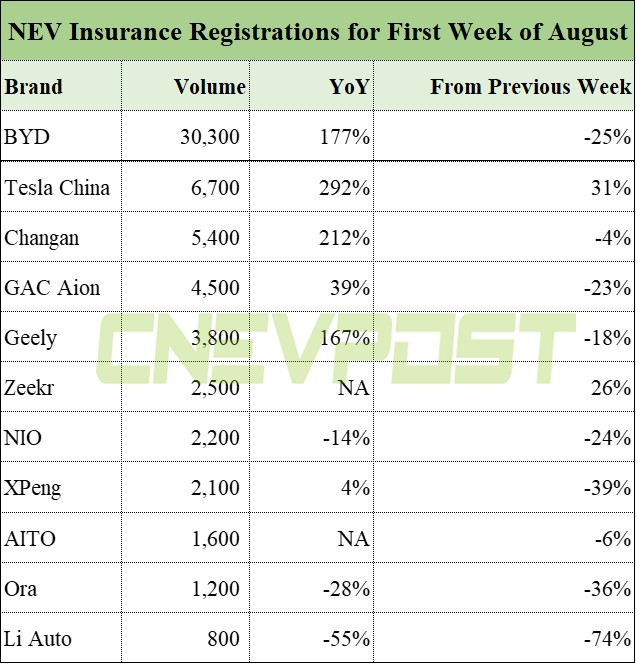 This data is based on Statutory Automobile Liability Insurance, which is required in China before a vehicle can be allowed to be driven on open roads.

It is worth noting that it is common for the auto industry to see lower sales at the beginning of the month, but it is not common to see such a significant decrease as Li Auto.

It could be that the initial launch of the Li L9 has created a disruption in Li Auto sales, although company executives previously downplayed the impact of its new SUV on the existing model, the Li ONE.

Li Auto launched the Li L9, the company's second model after the Li ONE SUV, on June 21, following its predecessor's extended-range technology. Its deliveries are expected to begin this month.

On June 4, Li Auto founder, chairman and CEO Li Xiang said on Weibo that the model will be officially delivered in August and deliveries could exceed 10,000 in September.

On July 1, Li Auto co-founder and president Shen Yannan said while the company announced that 13,024 vehicles were delivered in June that user enthusiasm for Li L9 did not hold back order intake for the 2021 Li ONE, which remains high on the back of continued user recognition.

On August 1, Li Auto announced that the company had reached the production milestone of 200,000 Li ONEs when it announced that it had sold 10,422 vehicles delivered in July, but did not continue to downplay the impact of the Li L9 on the model.

The Li L9 has received positive feedback from customers since its June 21 launch, and it has amassed more than 50,000 orders, with more than 30,000 confirmed non-refundable orders, Shen said on August 1.

Still, the current concerns may also be short-lived. But until the Li L9 proves its success and the Li ONE proves that its demand was not cannibalized, investor concerns are also likely to persist.

It's also worth noting that CnEVPost reported yesterday that Scottish investment firm Baillie Gifford & Co increased its holdings in NIO and cut its holdings in Tesla and Li Auto during the second quarter.

"This fundamentally keeps us on the sidelines," according to the note.

The team raised their price target on Li Auto by $2 to $30, but that implies a 9.64 percent downside from Monday's close.