Deutsche Bank raised its forecast for Li Auto's deliveries this year to 160,000 units from 155,000, but believes the company could face some incremental headwinds in 2023.

Deutsche Bank provided a preview of Li Auto's second-quarter earnings and raised its price target in a research note sent to investors on Tuesday.

In the report, analyst Edison Yu's team maintained a Hold rating on Li Auto, but raised the 12-month price target by $2 to $30. 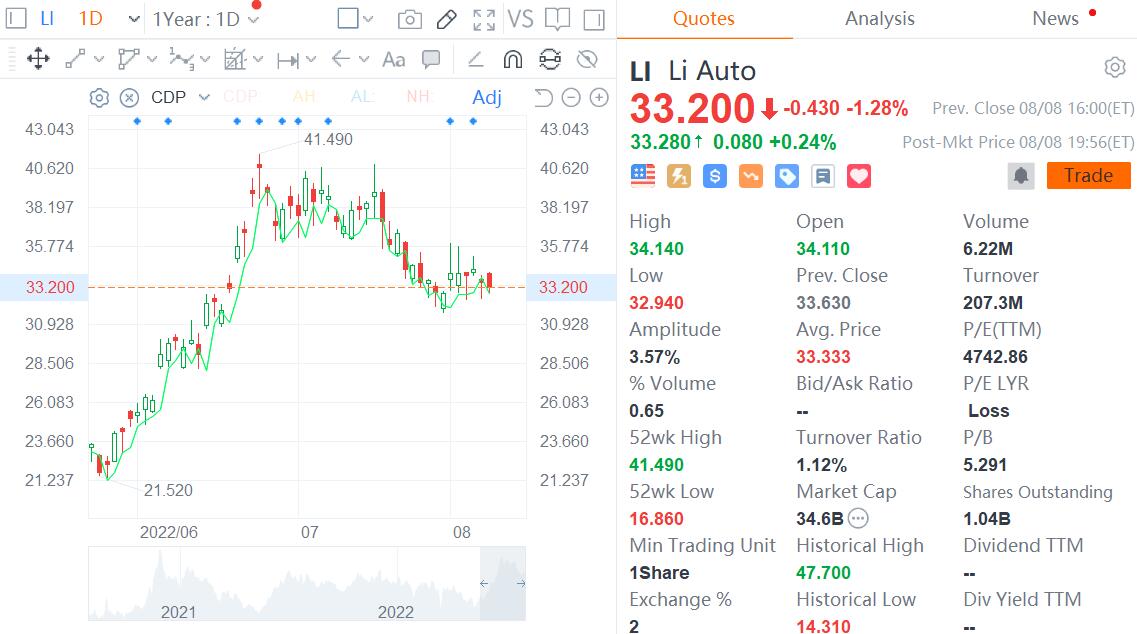 Yu's team is more bullish on its local peers NIO and XPeng Motors than Li Auto, giving both companies a "Buy" rating.

This is mainly because the team believes Li Auto could face some incremental headwinds in 2023.

"This fundamentally keeps us on the sidelines," according to their report.

Li Auto said last week that it will report unaudited second-quarter results on Monday, August 15, before the US stock market opens.

This was mainly due to the impact of the Covid epidemic, which led to a significant reduction in its April deliveries.

Yu's team believes that Li Auto will have a solid quarter, easily exceeding its initial guidance for sales, which will result in a strong gross margin, despite inflation headwinds.

This compares to the current analyst consensus estimates of RMB 7.97 billion, 20.8 percent and -0.21 for these numbers in a Bloomberg survey.

The Li L9 has amassed more than 50,000 orders since its launch, with more than 30,000 confirmed non-refundable orders, Shen Yanan, co-founder and president of Li Auto, said when announcing July's delivery figures on August 1.

Yu's team expects full-force sales of the Li L9 in the fourth quarter, bringing the company's deliveries for the quarter to about 60,000 units.

The team expects demand for the Li ONE to be somewhat cannibalized by the Li L9 and to feel competitive pressure from the AITO M5.

Overall, the team raised its full-year delivery forecast to 160,000 units from 155,000 to account for higher Li L9 deliveries, which are somewhat offset by lower Li ONE sales.

The team raised its gross margin forecast by 40 bps to 22.2 percent, reflecting faster growth and a higher contribution from the upcoming Li L9 model.

Last month, a blogger on Weibo posted images of an upcoming BEV model from Li Auto: the W01, due out in the second half of 2023, the team noted.

Zeekr has also teased its upcoming Zeekr 009 MPV, Yu's team said, adding that they expect competition in this segment to become increasingly fierce over the next year.

The team believes that in the near term, Li Auto stock sets up well heading into the earnings period after a recent pullback, as second-quarter margins could upside and third-quarter guidance should be robust.