XPeng chairman and CEO He Xiaopeng spent about $30 million to buy additional ADSs of the EV maker. 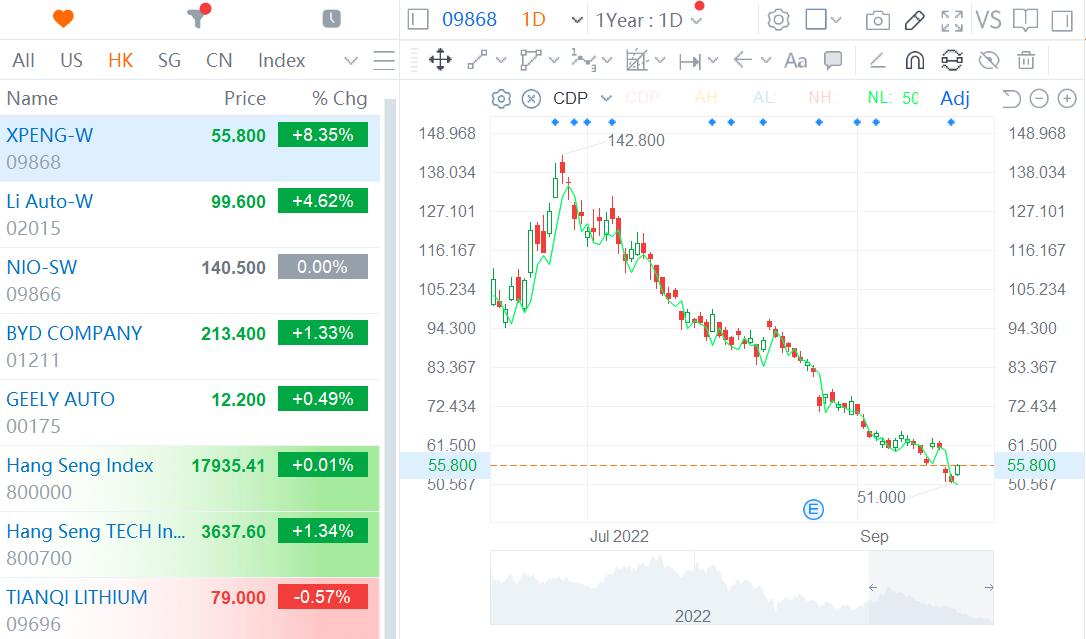 Shares of XPeng Motors, which has suffered a severe sell-off so far this year, surged in early Hong Kong trading Monday after the company revealed a stake increase from its CEO.

XPeng was up 8.35 percent to HK$55.80 in Hong Kong at press time, recovering some of the ground lost this year. XPeng was down about 70 percent so far this year in Hong Kong as of Friday.

Simplicity Holding, which is wholly owned by XPeng chairman and CEO He Xiaopeng, has purchased a total of 2.2 million American Depositary Shares (ADSs) of XPeng in the open market on September 23 at an average price of $13.58 per ADS, according to an announcement by XPeng on the Hong Kong Stock Exchange on Sunday.

This means that the XPeng CEO spent about $30 million to buy additional shares of XPeng.

XPeng's board believes the acquisition demonstrates Mr. He's confidence in the company's prospects and growth potential, as well as his long-term commitment to the company, the announcement said.

XPeng has significantly lagged behind its peers in the stock market this year, with the official launch of its flagship SUV, the G9, last week seemingly failing to inspire investor optimism and causing much confusion among potential consumers.

In addition, XPeng announced Saturday that it has put its first 480 kW S4 supercharging stations into operation in five Chinese cities. These charging facilities use the company's latest supercharging technology to give the G9 a range of more than 200 kilometers in as little as five minutes.

Li Auto announced on September 22 that the launch of the new extended-range electric vehicle (EREV) Li L8 has been moved up to September 30.

In addition to the Li L8, Li Auto also previewed the Li L7 and Li L6, both of which will be EREV SUVs.

On September 24, NIO co-founder and president Qin Lihong said the company will launch the ET7, ET5 and ES7 at the NIO Berlin 2022 event to be held on October 7, local time in Europe.

On September 25, William Li, the company's founder, chairman and CEO, said NIO already has more than 720 employees in Europe, most of whom joined within six months.