NIO up over 5% to all-time high in Hong Kong, while XPeng and Li Auto fall

As of press time, NIO's Hong Kong-traded shares rose 5.41 percent to HK$198.7, to a record high. This is the fourth consecutive day of gains for the stock, which has accumulated a gain of about 96 percent since May 13.

NIO's previous all-time high in Hong Kong was HK$196 on April 4, but it fell after that, with a cumulative decline of 40 percent from April 4 to May 12.

XPeng was down 0.15 percent to HK$136.1 in Hong Kong as of press time, after two consecutive days of gains. 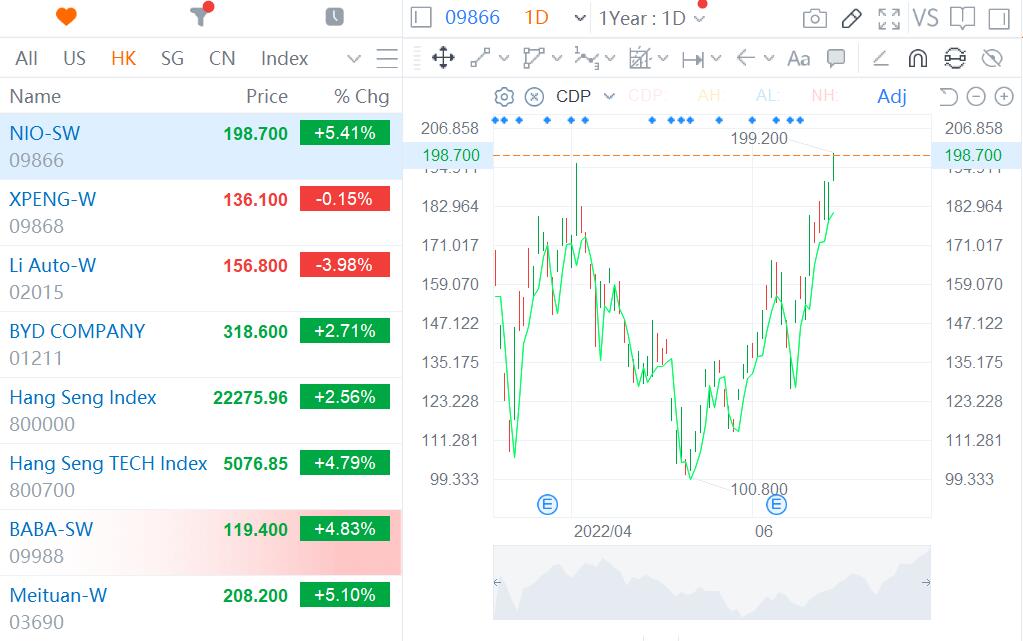 The Beijing government will provide subsidies of up to 10,000 yuan ($1,500) to individual car owners who scrap or transfer a passenger car they have owned for more than a year and purchase a NEV, valid from June 1 to December 31.

The policy is aimed at consumers who already own a car in Beijing, a group that is apparently larger than first-time buyers, given the extreme difficulty of obtaining new license plates in the city.

Last week, the Shanghai government introduced a similar policy, but it was limited to pure electric vehicles, with EREVs as well as PHEVs excluded.

From June 1 to December 31, individuals who scrap or transfer their cars owned in Shanghai and purchase pure EVs locally will receive a subsidy of 10,000 yuan, according to an announcement from the Shanghai government on June 17.

The announcement of the subsidy in Shanghai comes after Jiading District, where NIO's global headquarters is located, announced policies to stimulate vehicle consumption in the district, including NEVs and ICEs.

In specific company news, an NIO test vehicle fell from the third floor of a building in Shanghai on June 22, killing two testers.

NIO responded on June 23 that the accident was not related to the vehicle, and while this helped allay investors' concerns, it found public criticism for the company's lack of compassion.

In the past few days, a large number of self-media articles critical of NIO have been posted on platforms including WeChat.

It is worth noting, however, that public judgments following negative news about a company are common in China. No similar critical articles have been published by mainstream media or state media.

On June 24, Li Auto said its new SUV, the Li L9, had received more than 30,000 orders within 72 hours of the vehicle being available for reservation.

Each Li L9 order requires a deposit of RMB 5,000 yuan, which is refundable within a certain period of time, the company noted in a press release, without providing further details.

Li Auto officially unveiled the L9, the company's second model after the Li ONE SUV, continuing to adopt its predecessor's extended-range technology, at a launch event on the evening of June 21 Beijing time.