Volkswagen China will further optimize the prototype with several rounds of flight tests later this year, with the improved one set for a higher standard of test flights in late summer 2023. 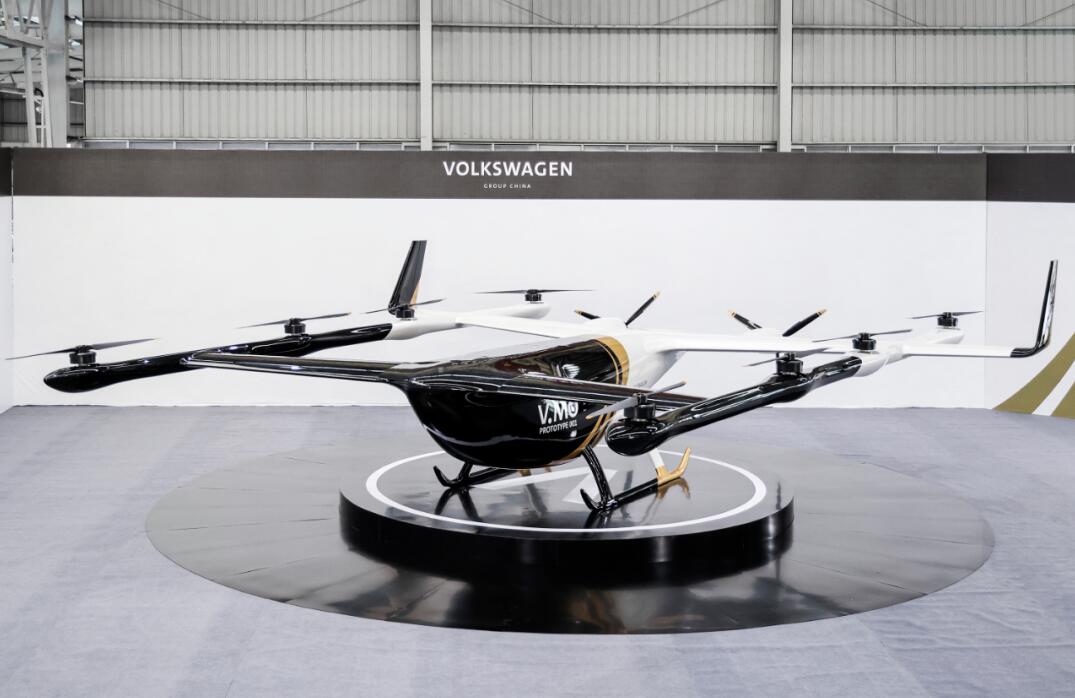 XPeng Motors is not alone in its exploration of flying cars, as the Chinese branch of German automotive giant Volkswagen Group joins the field.

Volkswagen China launched its air mobility program in 2020 to explore next-generation mobility solutions, including the urban air mobility market and the expansion of urban mobility into airspace, according to the release.

After intensive research, concept building and development, the project's team has now completed the first prototype, the V.MO.

To commemorate Volkswagen China's completion of this milestone in the Chinese Lunar Year of the Tiger, the prototype has been designed in a unique combination of black and gold. 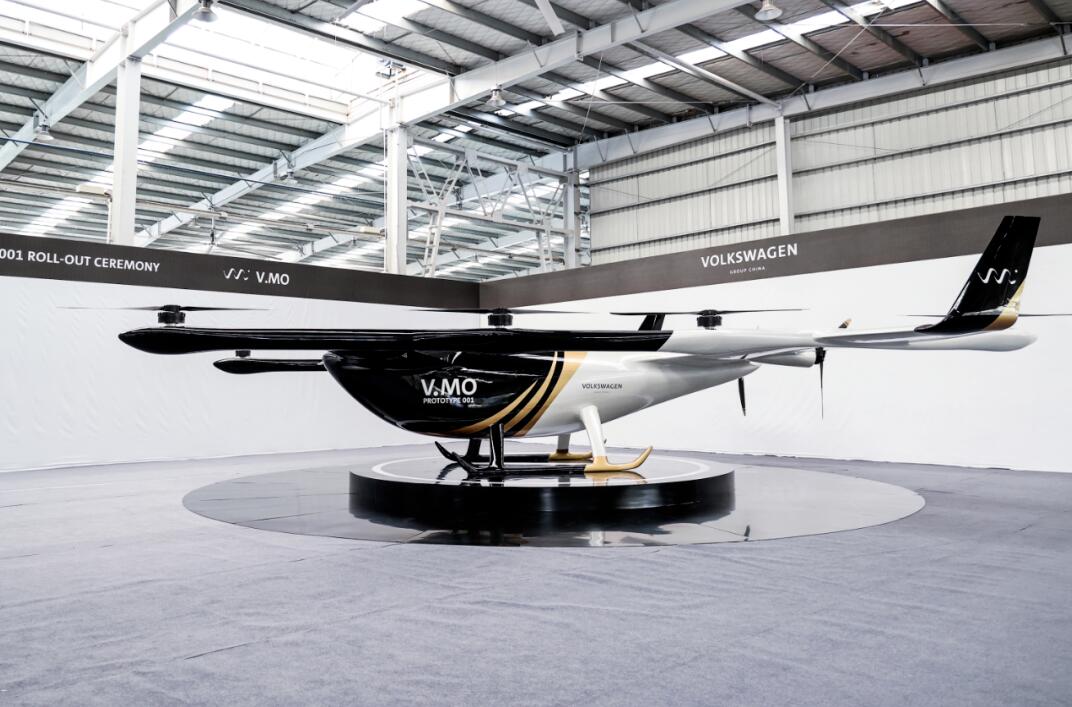 The prototype is designed as a luxury X-wing configuration with a wing length of 11.2 meters and a wingspan of 10.6 meters, with eight rotor blades for vertical take-off and landing and two propellers for horizontal propulsion on course.

Volkswagen will further optimize the prototype with several rounds of flight tests later this year, and the improved one will be ready for a higher standard of test flights in late summer 2023, it said.

The all-electric, fully autonomous eVTOL manned vehicle will eventually be able to fly up to 200 kilometers with four passengers and luggage.

With this pioneering project, Volkswagen is committed to creating a premium mobility product to meet the needs of Chinese customers for innovative technology and future mobility services in the air, said Stephan Wöllenstein, CEO of Volkswagen Group China.

The unveiling of the V.MO demonstrator is the first major milestone in Volkswagen's exploration of urban air mobility and once again underlines the Group's development mission "in China, for China," according to Wöllenstein.

Volkswagen China is rapidly expanding its local R&D and software capabilities, aiming to be more agile and responsive to customer needs, the release said.

Volkswagen has assembled a team of local Chinese experts to advance its air mobility program and is working with local Chinese partners, including Hunan Sunward Co Ltd. 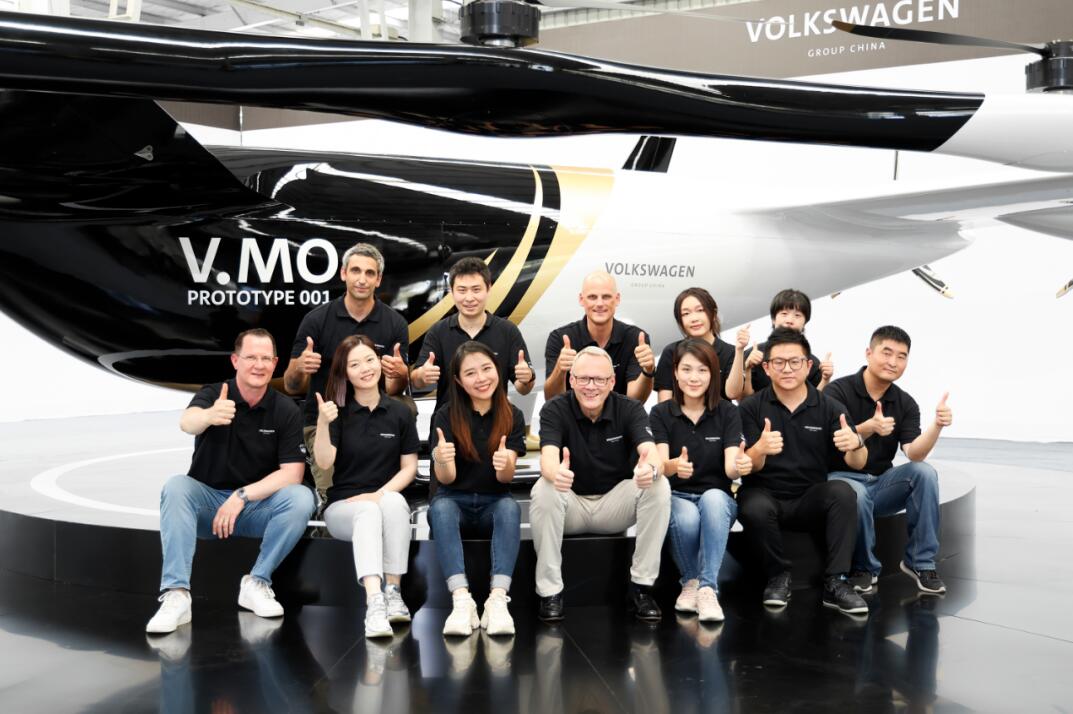 Sunward, a subsidiary of Hunan-based Sunward Equipment Group, develops, sells and services aviation products and is a market leader in light sport aircraft.

The urban air transportation market is emerging rapidly and is centered on the use of airspace, especially for short and intermediate trips at low altitudes in major cities and between cities, said the press release from Volkswagen China.

In China, the development of this sector will relieve traffic congestion in large cities and play an important role in the future of urban and intercity transportation, the release said.

Compared to the current traditional ground transportation methods, the eVTOL will enable faster, more efficient and flexible travel, according to Volkswagen China.

As the air mobility program grows, Volkswagen will work with the relevant Chinese authorities to obtain certification, according to the release.

In China's flying car space, XPeng is one of the most aggressive explorers, with its flying car division XPeng Aeroht putting its first pilot plant into operation on Monday.

At its annual Tech Day event last October 24, XPeng unveiled XPeng Aeroht's sixth-generation flying car concept, a vehicle that can both drive like a normal car on land and fly through the air.

XPeng and its chairman and CEO He Xiaopeng said at the time that the company aims to have the flying car in mass production by 2024, with a price tag expected to be under RMB 1 million ($157,000).

GAC Group, which is also Guangzhou-based like XPeng, is developing flying cars, local media outlet Time Weekly said in a report Monday, citing an insider at the company.

It's worth noting, however, that the lack of policy support is the key to the difficulty of the commercialization of flying cars.

This means that flying cars are actually no longer part of the "car" category, and the existing ground transportation system and regulations do not apply to them.

Thankfully, however, Chinese policymakers are trying to provide support for the industry, and some pilot reforms to open up low-altitude airspace are underway.