XPeng cuts prices on most models after Tesla move

The move is a normal price adjustment for XPeng as its vehicle production costs have fallen, a spokesperson told CnEVPost. 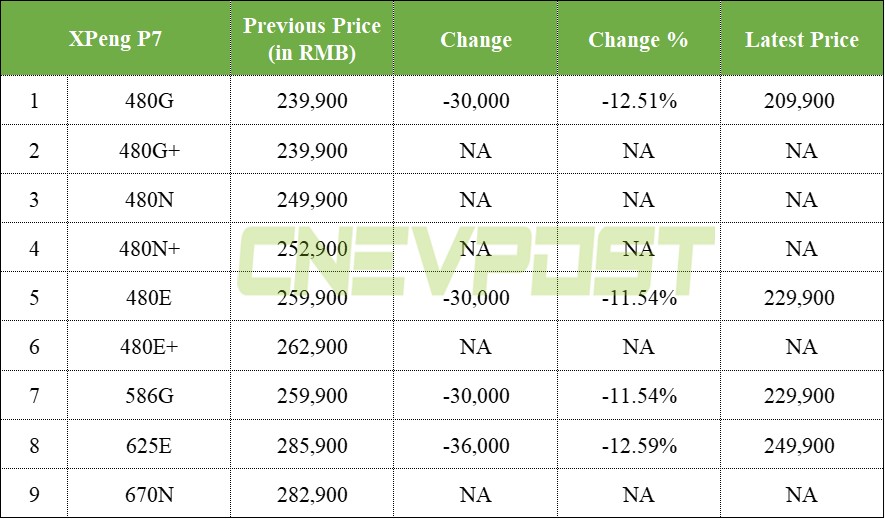 XPeng (NYSE: XPEV) cut prices on most of its models, 10 days after Tesla's steep price cuts in China sent shockwaves through the industry.

In a post on its WeChat account today, XPeng announced updated pricing for all models except the flagship SUV G9, effective at 14:00 today.

This is the largest adjustment XPeng has made to its product sales system since the significant reduction in the number of available model versions on November 19, 2022.

The move is a normal price adjustment for XPeng, as its vehicle production costs have dropped, a spokesperson told CnEVPost.

This is also to make XPeng's smart car products more accessible so that more consumers can enjoy the changes that intelligence and technology can bring to a better life and travel, the spokesperson said, adding that the company wants to let more people experience a different kind of smart car as early as possible through more competitive prices.

"Not only that, next, we will also do better in supply chain management, cost control, production efficiency and owner service so that more people can enjoy the changes brought by technology," the spokesperson said.

To avoid triggering dissatisfaction among existing owners, XPeng is offering first-time owners who purchase G3i, P5 and P7 within one year rights including vehicle warranty extension to 10 years or 200,000 kilometers, and a 4-year basic maintenance gift.

Previously, on January 6, Tesla significantly lowered the prices of all China-made models in an attempt to boost demand for its electric vehicle market in China.

Local media outlet The Paper quoted Zhang Xiang, a researcher at the Jiangxi New Energy Technology Institute, as saying in a January 6 report that other car companies will follow Tesla's move, especially for vehicles in the RMB 200,000-300,000 price range.