BYD Seal review: Is it the real Tesla Model 3 killer? 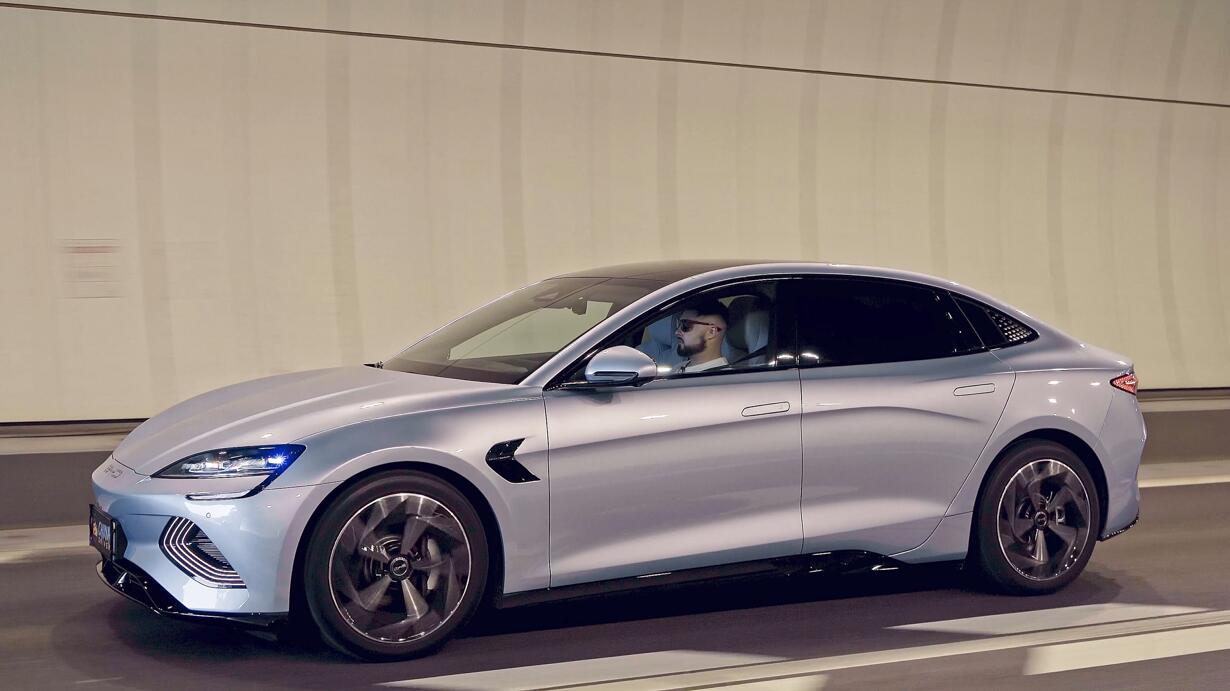 There are some undeniable facts in life, like it's impossible to please everyone or that a compact Chinese EV sedan around $30-$40K is destined to be dogged by Tesla Model 3 comparisons.

Comparing the BYD Seal to the Model 3 benchmark is almost certainly warranted. But talk about "Tesla Killers" and the idea online, that a car will come along and destroy the Model 3 out of existence, is a bit farfetched.

Tesla Model 3 aside, the BYD Seal seems somewhat of a turning point for BYD. A departure from the status quo in a few key areas really makes the BYD Seal the best BYD yet. 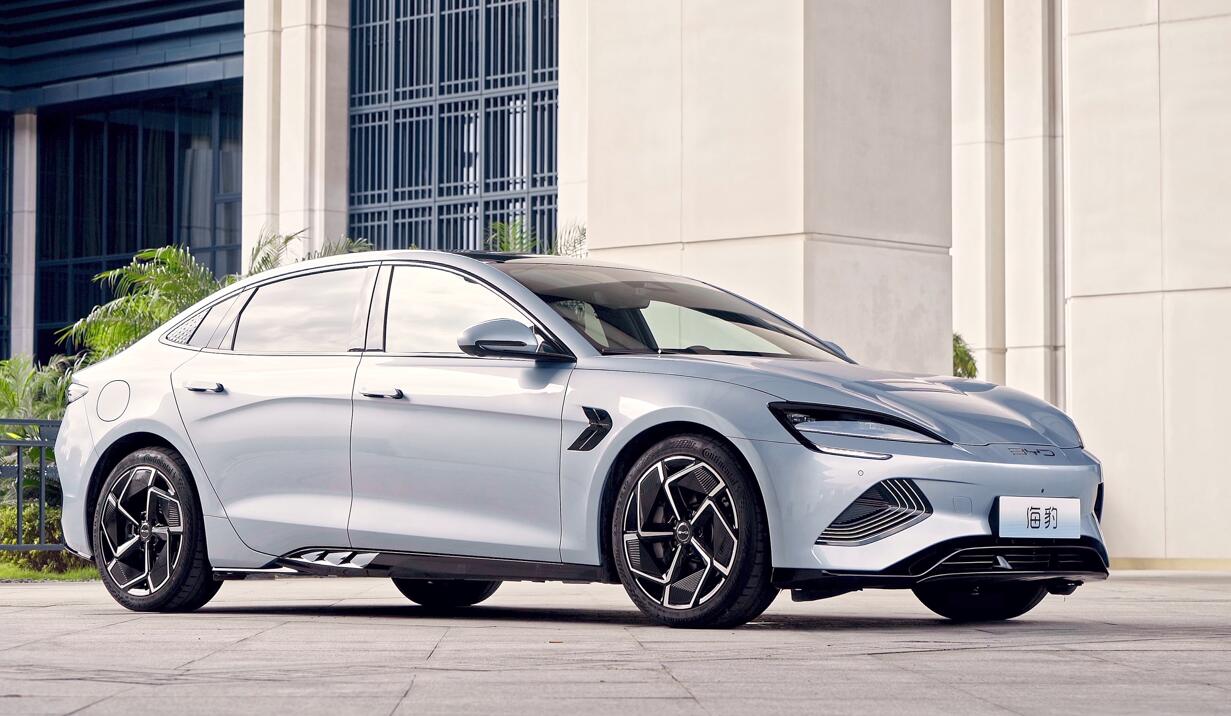 The BYD Seal is a handsome-looking car. Its side profile is athletic and exudes a feeling of motion. A short front overhang is accompanied by a relatively long hood with the windscreen raking back at a sharp angle, sporty. 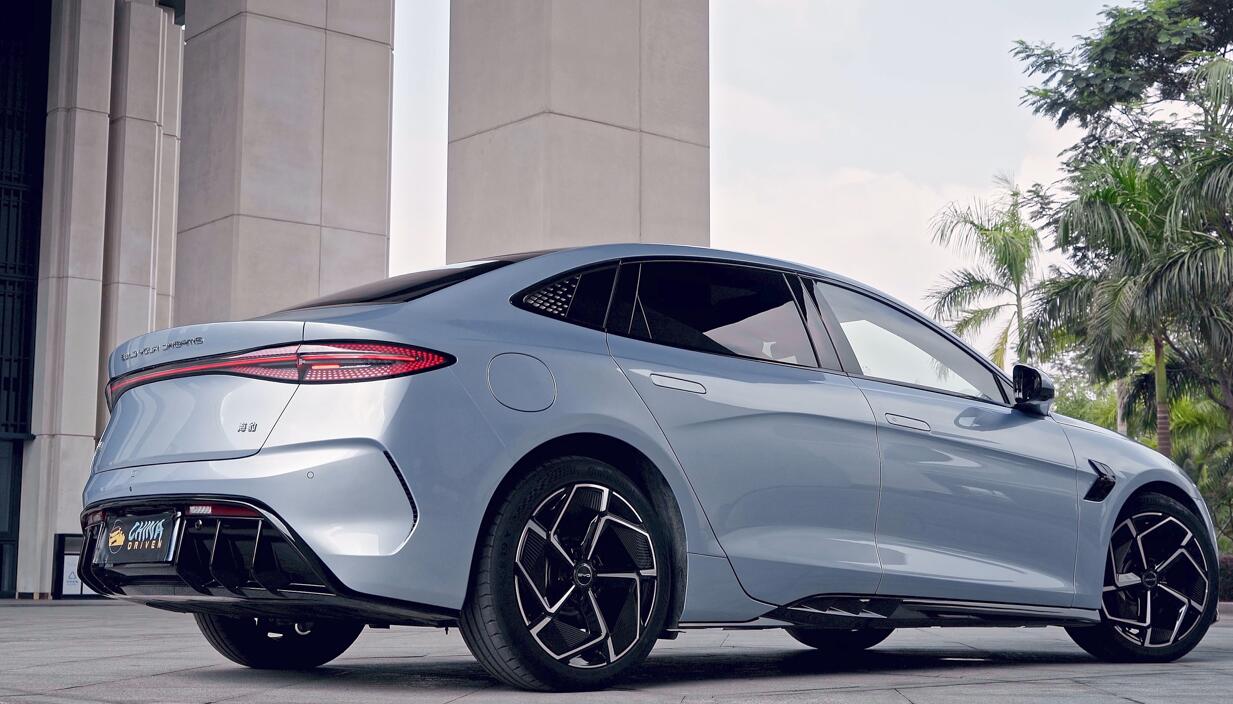 The high beltline, coupled with narrowing windows gives the suggestion of a lower roofline. The rear trunk deck kicks up a smidge finishing the pleasing shape of this EV. Even the 19-inch diamond cut, fan blade alloys wrapped in a sporty Continental Sport Contact 7 tire, look well-proportioned in the wheel arches. 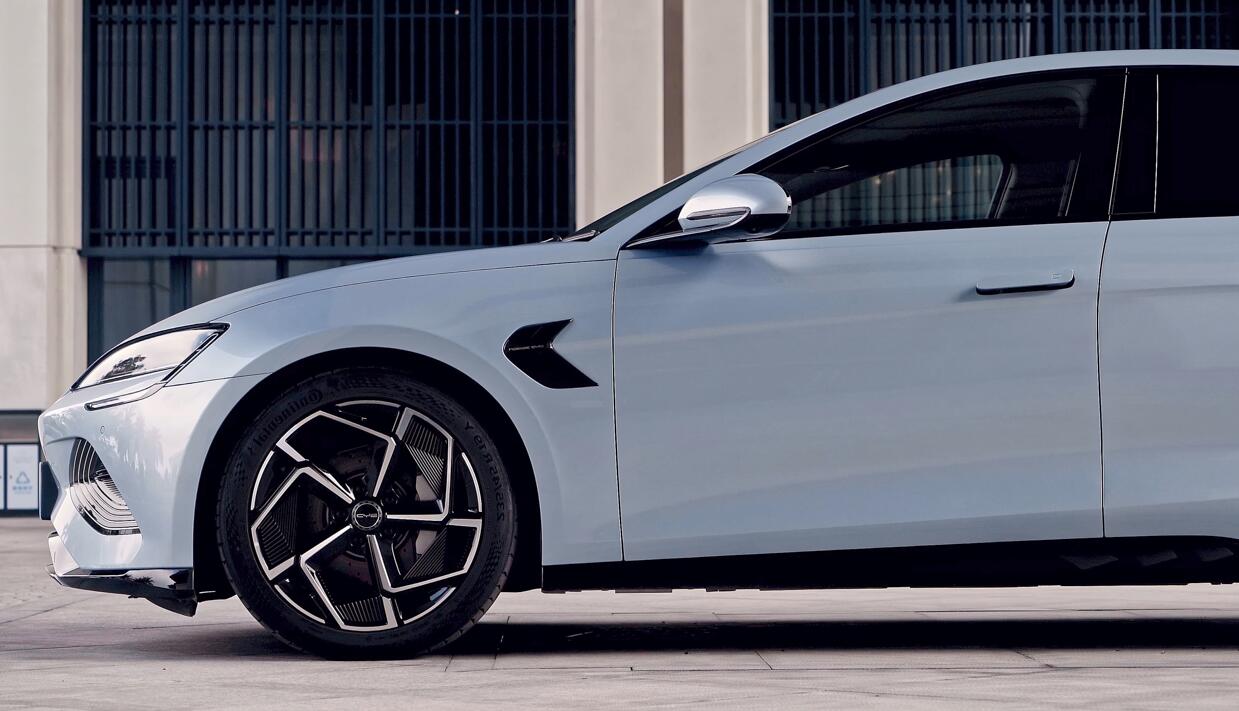 At the front, the hood bulges, and lines dive down almost into the center of the nose before the lower fascia splays back out again. The LEDs in the lower fascia almost have an optical illusion-like look. Whilst the black gloss lower splitter harks back to its more sporty pretenses.

With the BYD Seal belonging to BYD's Ocean line-up, there are various nods to its ocean theme, like the water droplets on the rear 3/4 window and in the rear LED light cluster.

If you park the BYD Seal next to many of the compact EVs on the Chinese market, you'll suddenly realize that "sport compact" is a more fitting term than "Compact Executive." And when you get behind the wheel you won't feel cheated. 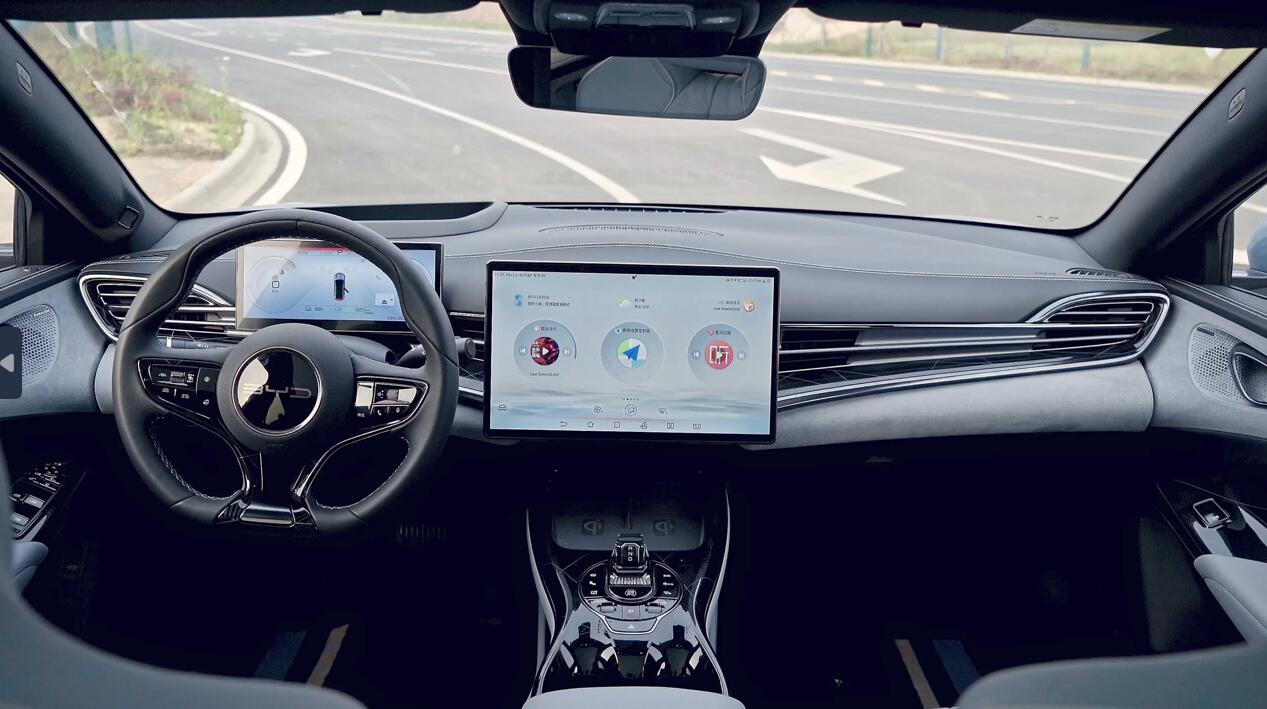 Styling and taste are subjective. And BYD interior design has been known to be a sticking point for many. Even if the styling inside the BYD Seal is not to your personal taste, I think it's undeniably the best interior yet from BYD. 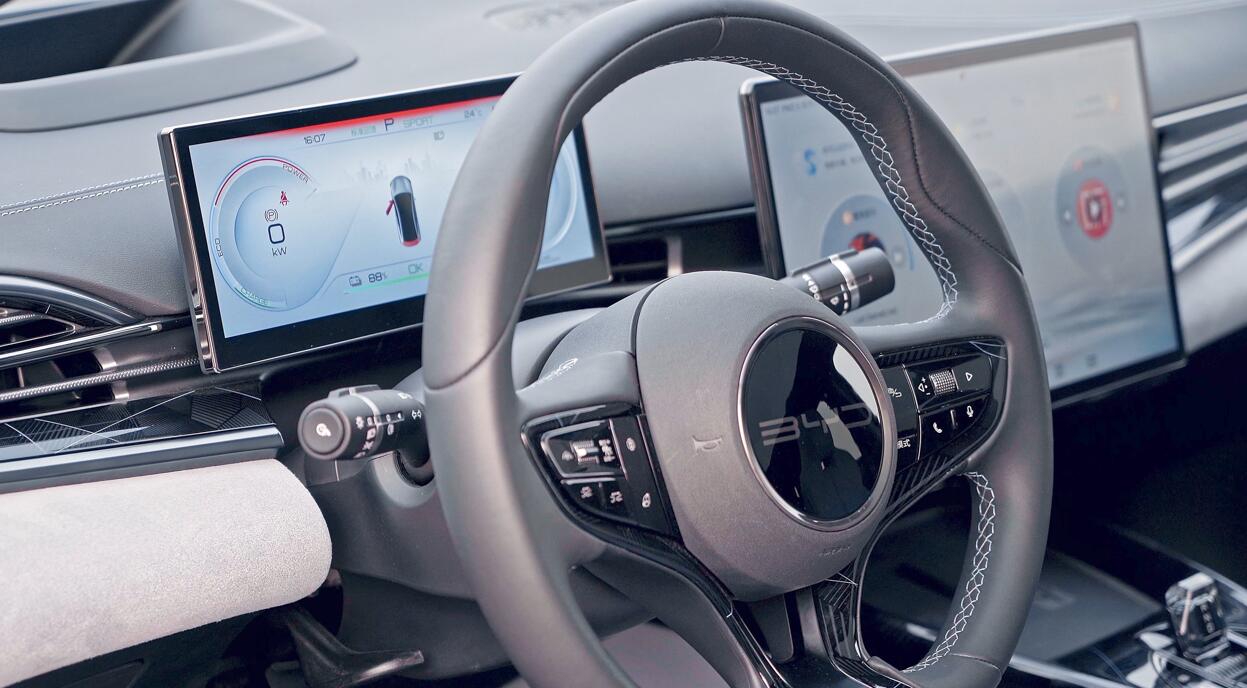 The materials used inside are much improved, with quilted leather and micro suede being used to good effect. I'm a big fan of the front seat design. They remind me of the Audi RS3 seats with their large shoulder wings. 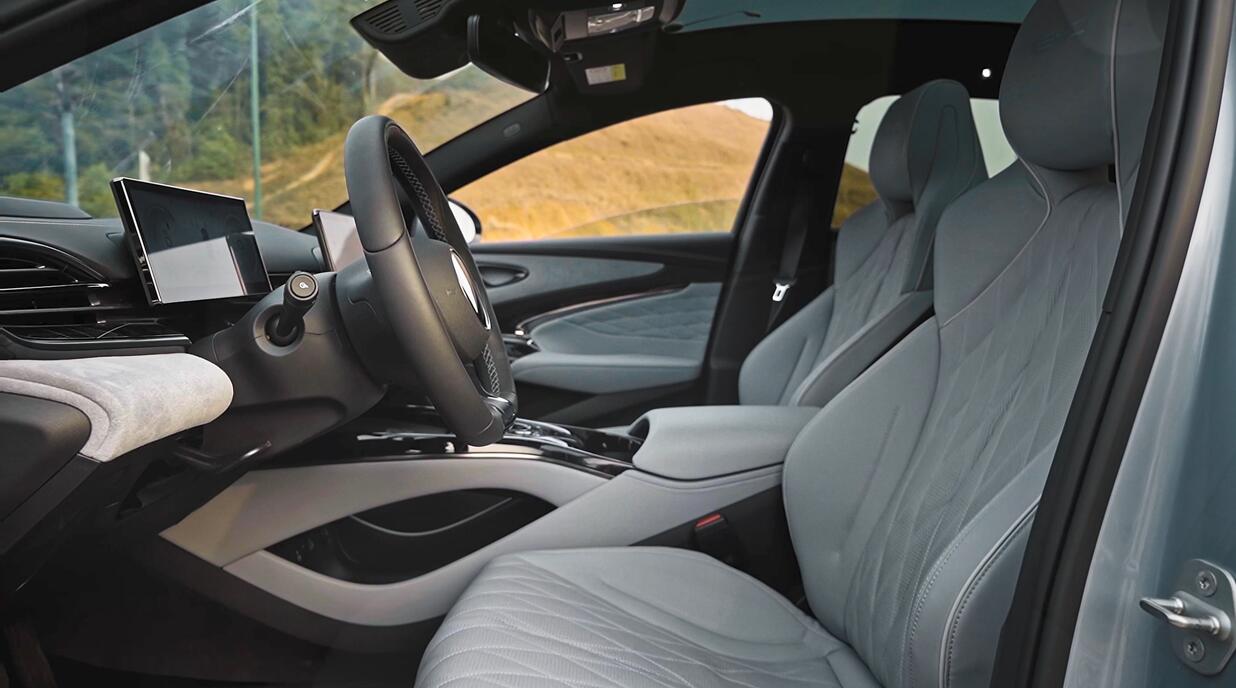 The whole cabin design is obviously inspired by the ocean theme, with the lines and design lapping around the cabin like waves. I admire BYD for sticking to their guns with "interesting" interior design and not following the crowd into minimalistic design oblivion.

The rear is not a bad place to be either, there's plenty of legroom thanks to its wheelbase is 2,940 mm, an extra 45mm longer than a Model 3. The headroom is also decent, although at 1.7m in height I'm not the best measuring stick. 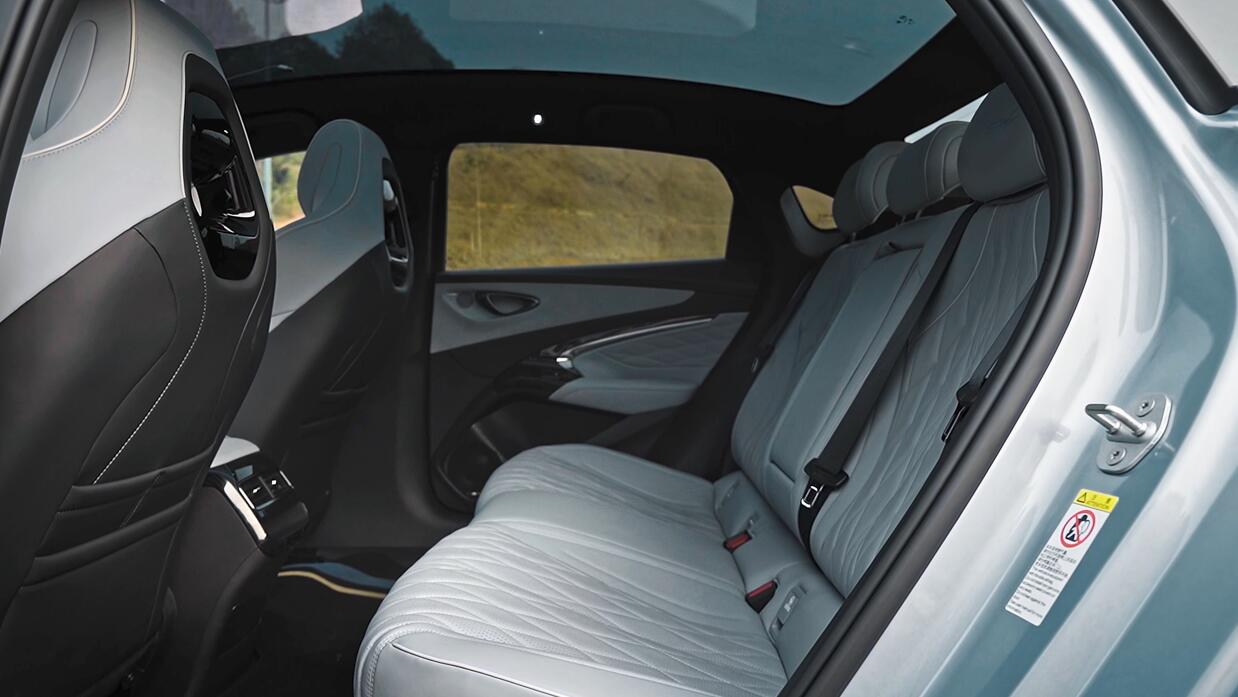 Unlike other rear benches where you find yourself sitting bolt upright, the rear seats in the BYD seal are slightly angled back in a more relaxed position. Rear material quality follows from the front and rear passengers given two USBs to charge devices. 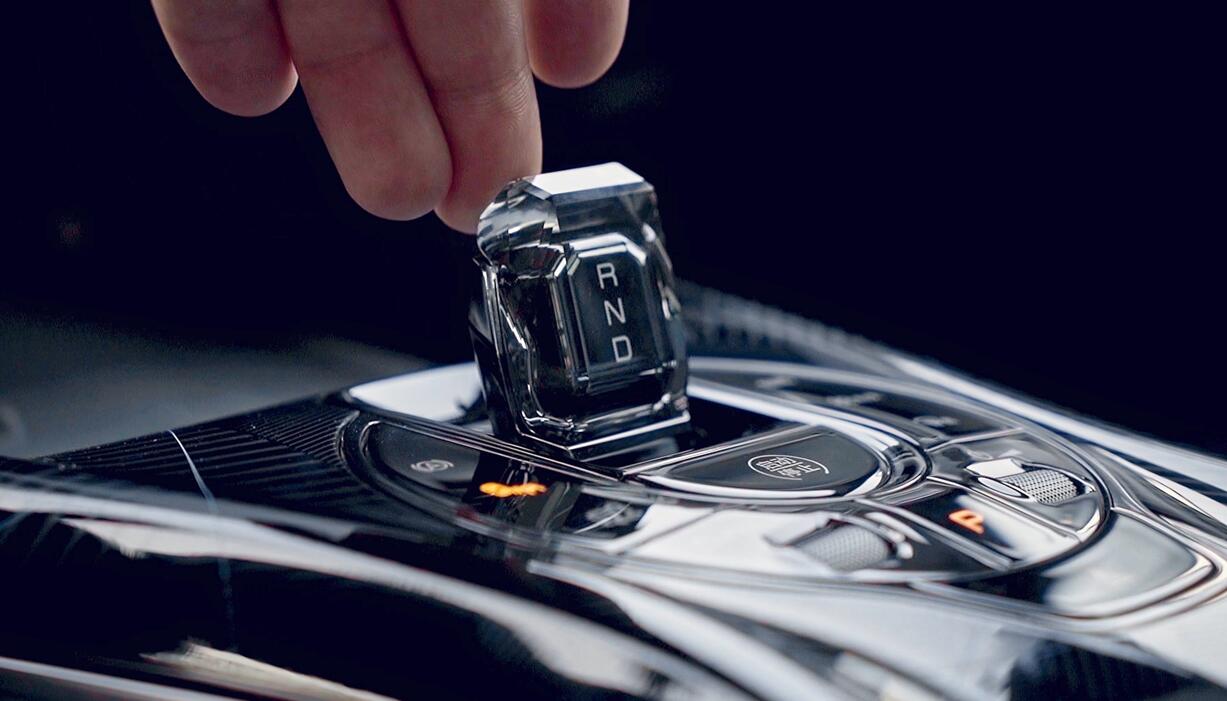 Taking center stage in the BYD Seal's interior is the 15.6-inch touchscreen which is able to rotate from landscape to portrait at the touch of a button, a fan favorite of BYD interiors. 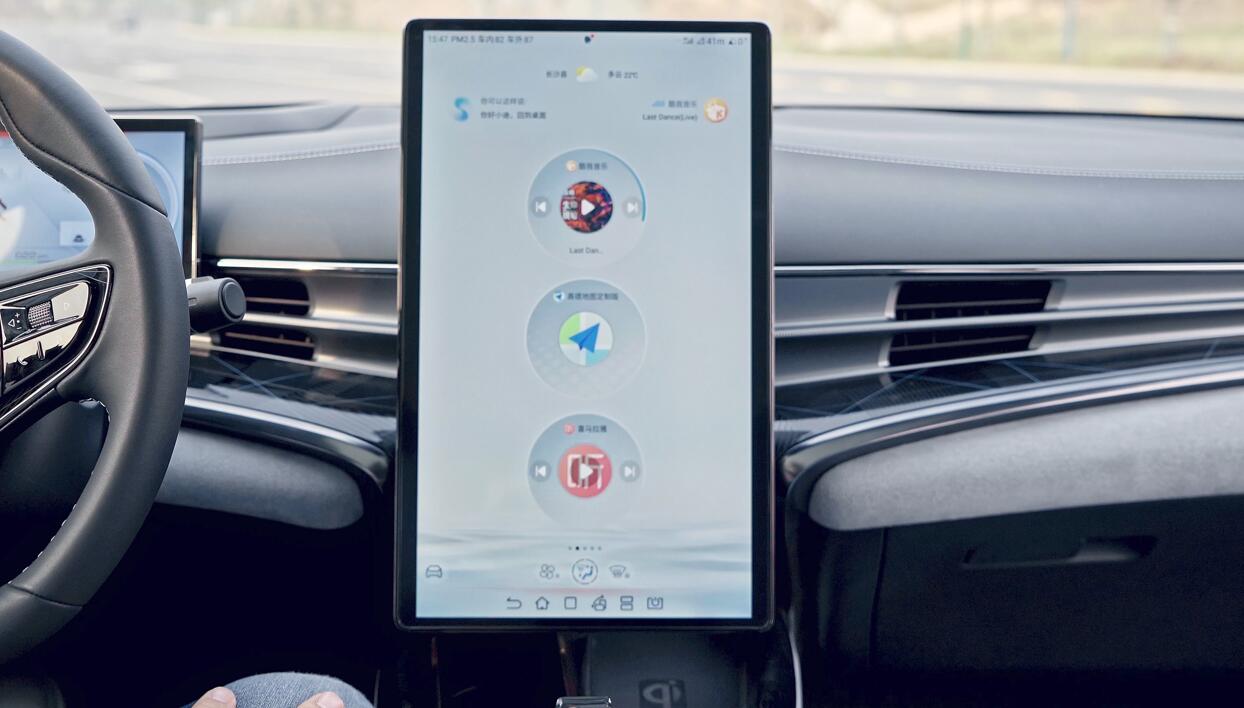 Joining the 10.25-inch instrument panel is a HUD. While HUDs are becoming more common on Chinese EVs it's still a nice feature at this price point.

There's standard tech like a built-in dashcam, dual-zone a/c with a PM2.5 filter, 5G connection, and Bluetooth mics for KTV.

Another departure for BYD is its 775W, 12-speaker surround sound system from Dynaudio rather than Dirac, the usual audio tie-in partner for BYD vehicles. You'll also find a 220V socket in the rear capable of powering up to 2.2 kW.

Front seats have 8-way adjustment and 4-way lumbar for the driver and 6-way adjustment for the passenger. They are also heated and cooled, however, the rear bench doesn't have any heating unlike the Model 3.

My favorite feature in BYD's infotainment system is the ability to input your home charging cost per kWh. This allows the car to give you an estimate of the cost of a trip based on home charging and distance.

In terms of ADAS capabilities, the BYD Seal comes standard with BYD's DiPilot. It's a level 2 vision-based system comparable to other competitors. Although it doesn't have some advanced features like NOA, it's still handy on a long drive on elevated roads and highways.

BYD has never put a huge focus on its ADAS suite, instead focusing on value for range in their vehicles. However, we have it on good authority that BYD is putting more development into its DiPilot.

The BYD Seal is running on BYD's e-platform 3.0. This means the Seal has 800V architecture and the infamous BYD LFP Blade Battery.

What is new for this BYD EV is the Cell-to-Body technology, where the battery is essentially a structural component, improving rigidity and reducing weight.

The other thing to note is that Blade battery cells are hexagonal in shape, and this allows BYD to pack cells more densely into the same space vs traditional cylindrical cells.

Impressively the AWD performance model has a claimed range just 50km shy of the long-range version, although these are all on the CTLC and won't reflect real-world ranges. DC fast charging times are quoted at 30mins for 20-80%. 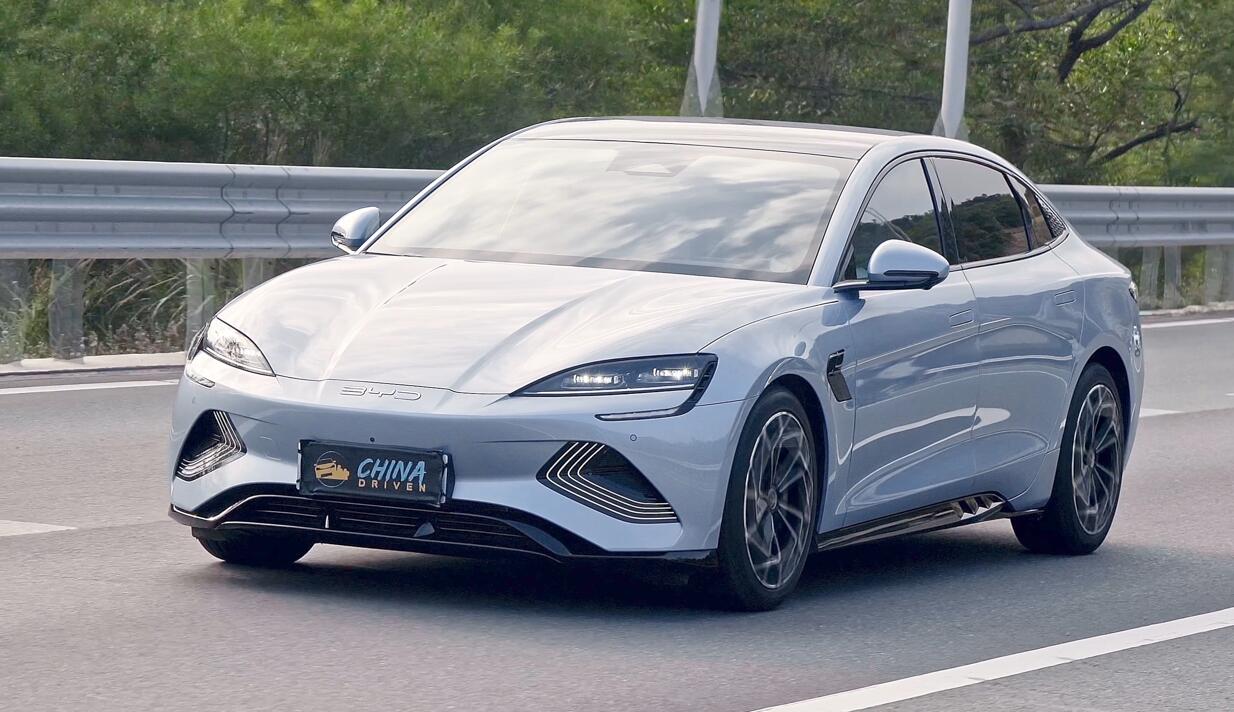 This is where the BYD Seal takes a massive detour from other BYD vehicles.

Driving this EV around mountain roads was a delight. The double wishbone upfront, the direct and precise steering, and the slight steering feedback all came together to deliver the sort of driving dynamics that no other BYD car could even dream of.

The turn-in is crisp, the four-piston calipers do their job, and the brake pedal feel is progressive. It handles corners one after another with no problem. The weight is down low thanks to the battery, and the performance tires provide plenty of grips. You have to get out of the car and just double check it really says BYD on the front of it. 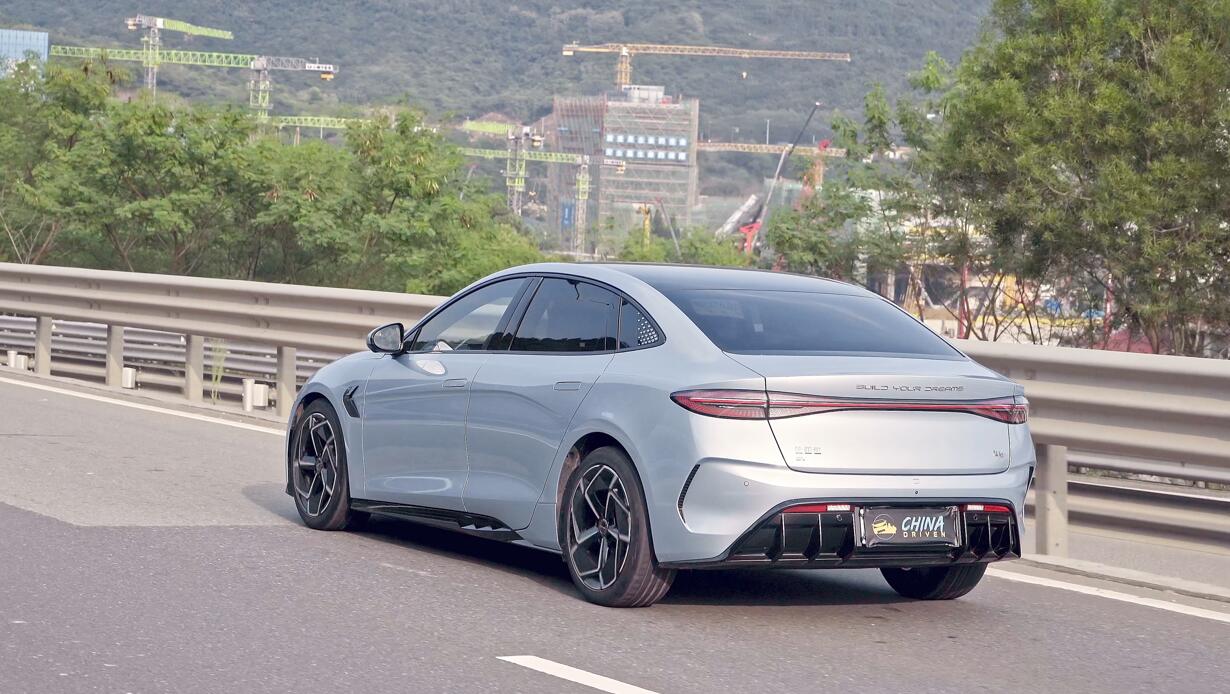 Come down from the mountain and cruise about on the highways and urban roads you'll notice the BYD Seal turns into a comfortable little cruiser.

There is no fancy air suspension at work, but the dampening and rear multi-link suspension help keep the ride comfy. Cabin noise levels are quiet at highway cruising speeds as well.

Steering inputs and pedal feel are light compared to a Tesla, but that’s very normal for Chinese EVs, the regenerative braking also isn't very strong. No inkling of one-pedal driving in the BYD Seal.

It's almost strange to say this about a BYD. The strongest trait of the BYD Seal is probably its driving dynamics. Expectations were utterly shattered for the better. 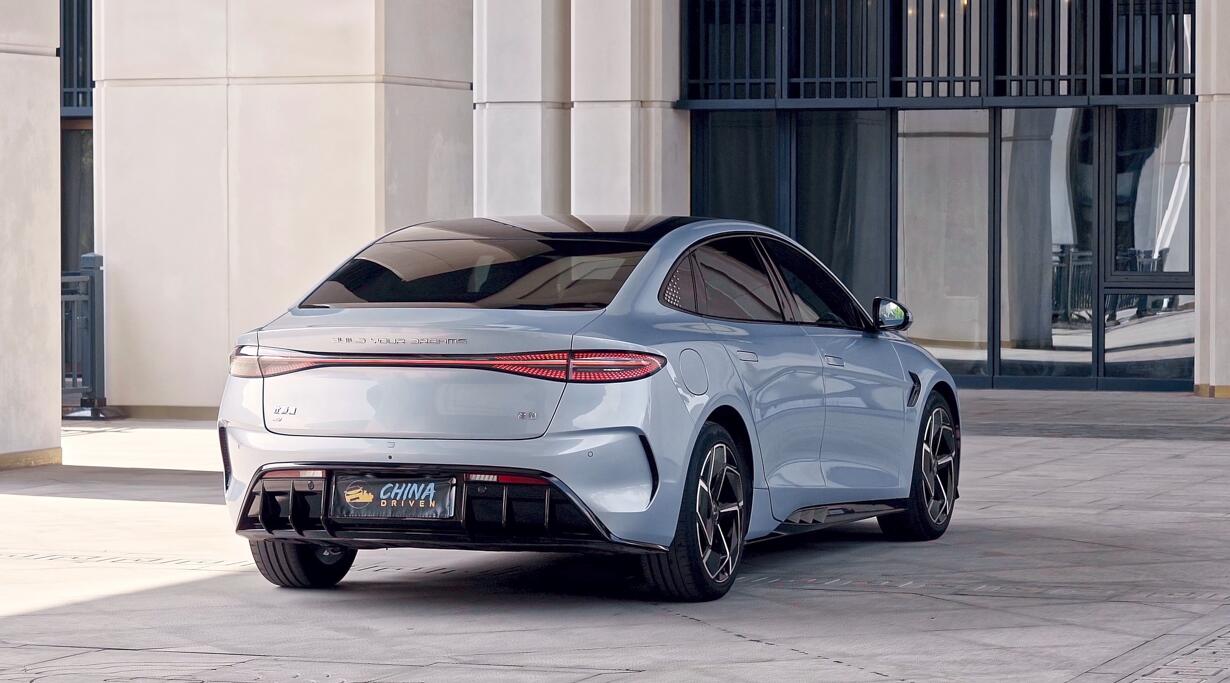 A delusional Hawaiian shirt-wearing YouTube reviewer, who shall remain nameless*, claims "it's the new benchmark for compact EVs!" And I can't say I disagree, maybe it's time I invest in a fanny pack.

And while the BYD Seal may compete for buyers at the lower end of the Model 3's pricing, just remember the Audi A4 and Mercedes C-class have existed for many years in the BMW 3's benchmark shadow, and they still sell plenty.

While I believe the BYD Seal will attract some Tesla Model 3 buyers, I don't think it's going to eat all of its cake. Brand image still counts for something.

*For legal reasons we have to disclose it's Ethan from Wheelsboy. Check out his video on the BYD Seal.