The accident killed two people and injured three others. Tesla said the accelerator pedal was depressed throughout the accident. 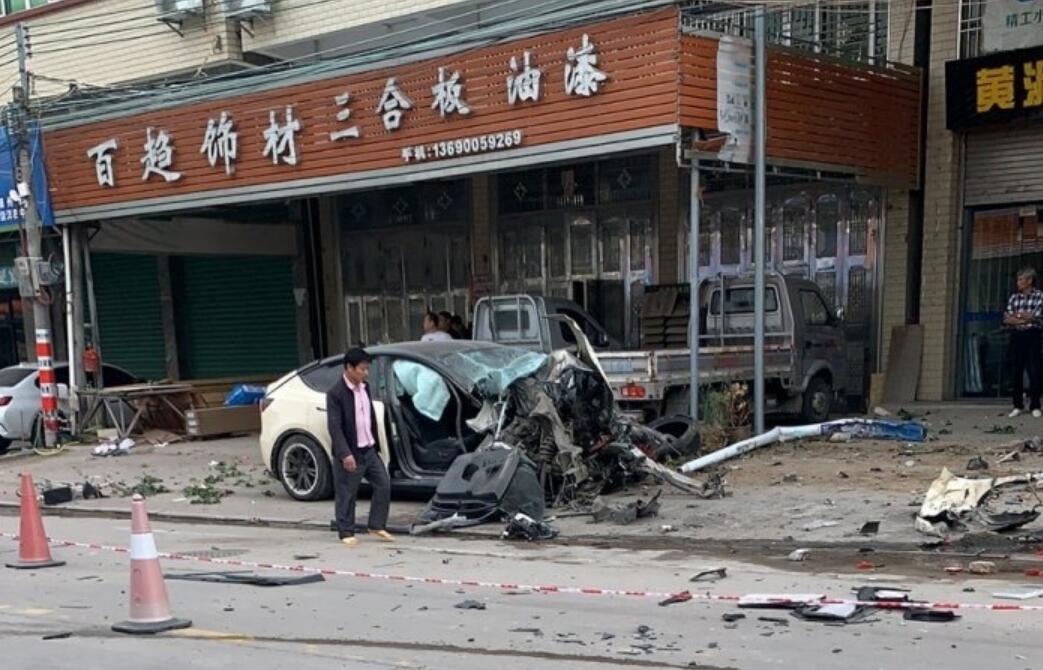 The latest fatal accident involving a Tesla vehicle has put the electric vehicle maker in the spotlight in China, with the driver's family claiming the car's brake failed and Tesla denying it.

A man was driving a Tesla vehicle in Chaozhou, Guangdong province in southern China, when the vehicle lost control and accelerated, according to a report today by Jimu News.

The vehicle traveled about 2 kilometers at high speeds while out of control, knocking down two motorcycles and two bicycles, killing two people and injuring three others, according to the report.

The local traffic police ruled out the possibility of the driver driving under the influence of alcohol and drugs, and said they would test the vehicle, the results of which are not yet available, the driver's son said, according to the report.

According to the video of the accident, the vehicle's brake lights did not light up for a long time during the high-speed driving process, the report said, citing Tesla's reply.

Back-end data show that the vehicle's accelerator pedal was depressed deeply for a long time and remained at 100 percent at one point, and the driver did not apply the brakes the entire process, Tesla said.

While the vehicle was in motion, the driver briefly pressed the Park gear button four times and quickly released it, while the brake lights also came on and off quickly, according to Tesla.

Surveillance video of the accident shows the vehicle slowly pulling over in front of a store on November 5 to prepare to stop, with the rear lights on.

After the vehicle pulled over, the car did not stop, but reentered the road and began to accelerate.

A lady who was identified as the driver's family on Weibo said that at around 6:59 am on November 5, the driver drove the vehicle to the front of the cement store he runs to pull over, and when the brake pedal was depressed, he found that the pedal was too hard to stop, and then the vehicle did not stop even when P gear was pressed.

The vehicle was driven 2.6 kilometers in a runaway state, the last 1.4 kilometers of which were driven with a blown left front tire on the vehicle, resulting in the death of a motorcyclist and a high school girl on a bicycle, according to the Weibo user.

The owner used to be a professional truck driver and this electric vehicle was used by him, the Weibo user said adding, "He was mentally clear and did not drive drunk or on drugs. May I ask who on earth would press the wrong pedal for 2.6 kilometers in a row?"

Here are some photos shared by the Weibo user. 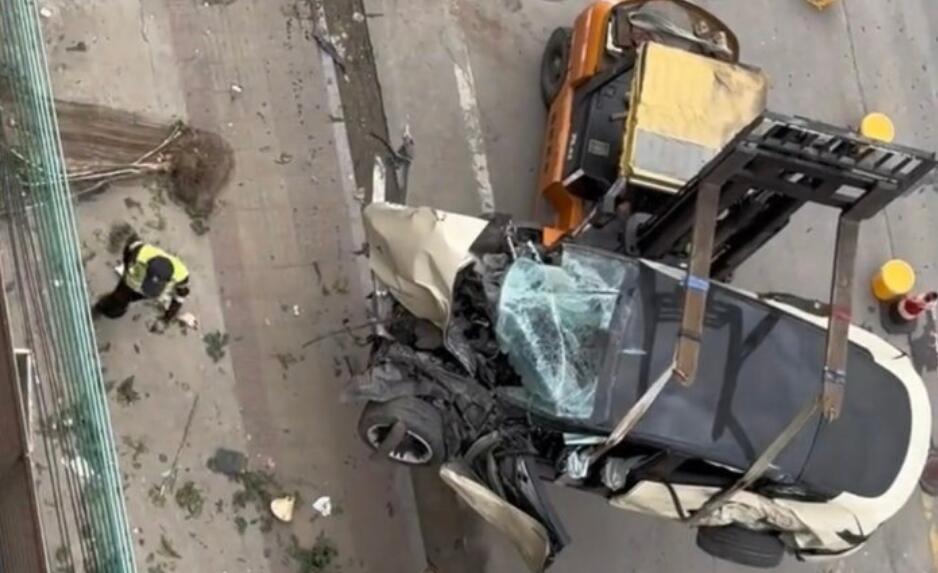 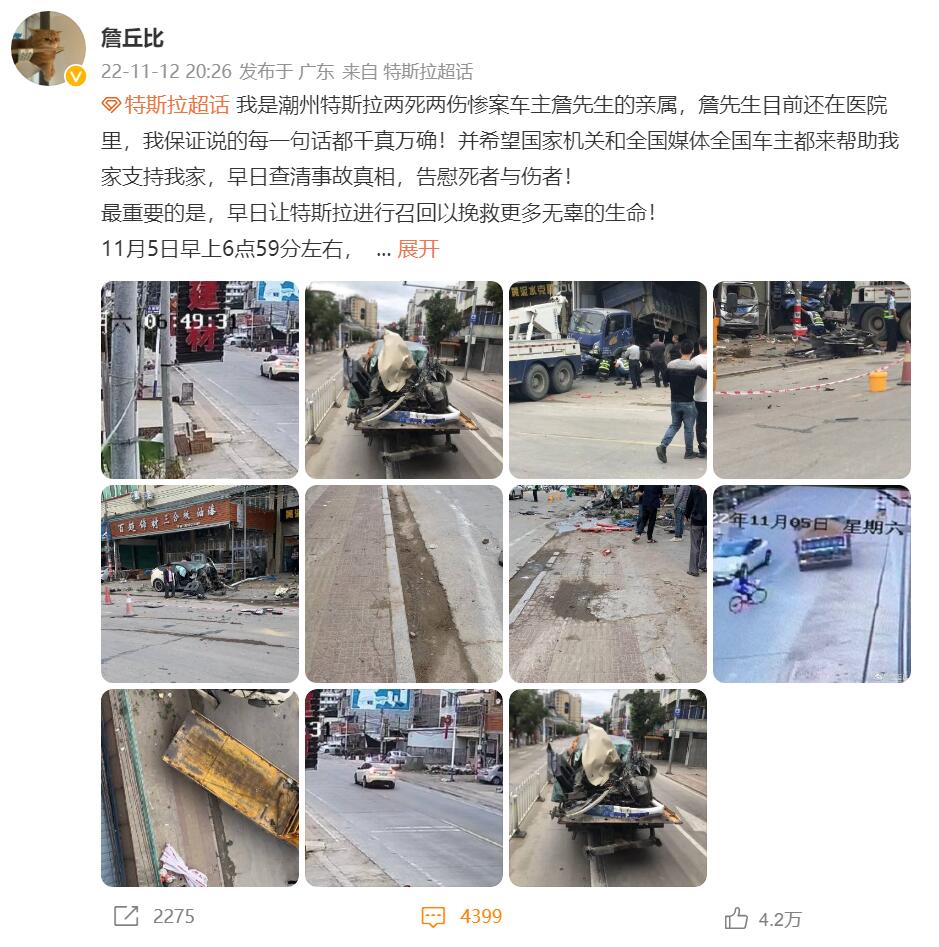 Police are currently seeking a third-party expert agency to conduct an appraisal to restore the truth about the accident, and Tesla will actively provide the necessary assistance, Jimu News quoted the electric vehicle company as saying.

This is the most talked about allegation of brake failure against Tesla since a lady protested at Tesla's booth at the Shanghai auto show last April.

On April 19, 2021, at the Tesla booth at the Shanghai auto show, the lady drew widespread attention when she stood on top of a show car wearing a T-shirt that could be translated as "Brake Failure".

Previously, the lady's father was involved in a traffic accident while driving her car home, claiming that the car accelerated instead of slowing down when he braked, causing him to rear-end multiple cars in front of him.

To date, the dispute has not been resolved.

The latest accident comes at a not-so-good time for Tesla, which recently cut the prices of its vehicles in China, sparking protests from a number of owners.

The electric carmaker has a factory in Shanghai that makes the Model 3 sedan as well as the Model Y SUV, with an annual capacity of 1.1 million vehicles, making it its largest factory in the world.

That's the largest gap between production and sales since Tesla's Shanghai plant opened in late 2019, the brokerage's data show.

While Tesla's inventory numbers remain low relative to older automakers, building inventory has been a down-cycle indicator for the industry, the report noted.

Tesla China had 71,704 wholesale sales in October, including 54,504 units exported, according to a report released earlier this month by the China Passenger Car Association (CPCA).