BYD signs land deal for plant with annual capacity of 150,000 EVs in Thailand

BYD's plant is expected to start operations in 2024 and the vehicles will be exported to ASEAN countries and Europe. 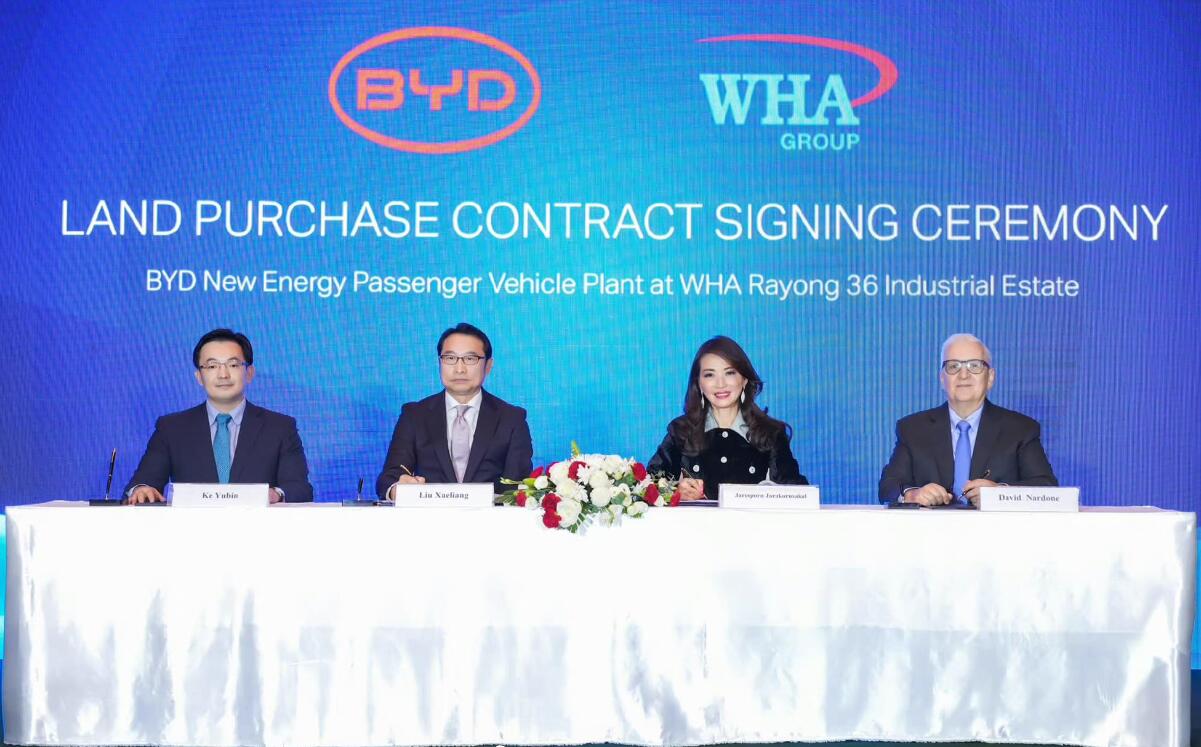 BYD will build its first electric vehicle (EV) plant in Southeast Asia in Thailand, where it expects to start production in two years with an annual capacity of 150,000 vehicles.

China's largest maker of EVs signed a land purchase agreement with Thai industrial property developer WHA Industrial Development PLC, a subsidiary of the WHA Group, on September 8, according to a statement from the latter.

The site, at WHA Rayong 36 Industrial Estate, covers 96 hectares (237 acres), and WHA said the deal is the most significant it has made in 20 years.

BYD's plant here is expected to start operations in 2024 with an annual capacity of 150,000 electric passenger cars, and the vehicles will be exported to ASEAN countries as well as Europe, according to the statement.

"Our world-class facilities and services, excellent infrastructure, and strategic location make it the perfect choice for BYD to expand its operations and enhance its international presence," said WHA CEO Jareeporn Jarukornsakul.

"This strategic land acquisition also confirms Thailand's strengths that continue to attract major industrial investors from China and other countries," she added.

The land agreement follows a set of investment commitments approved by Thailand's Board of Investment in August, including BYD's 17.9 billion baht ($491 million) EV production project.

It will be BYD's latest move to expand in overseas markets, and the plant is expected to be its first passenger car assembly plant in Southeast Asia.

BYD has more than 30 industrial parks around the world, with production sites in the United States, Japan, Canada, Brazil, Hungary and India, according to the company's website. But these production facilities appear to be used primarily for the production of electric buses.

The Thai government plans that by 2030, EV production will account for 30 percent of total vehicle production. The country could become an important NEV market hub in Southeast Asia, providing an opportunity for BYD to enter the local market, it said at the time.

BYD's previous press release did not mention its sales targets in Thailand, but according to WHA's press release today, the partnership with RÊVER aims to sell more than 10,000 electric vehicles in the first year of operation.

In addition to Thailand, BYD has also announced the entry of its passenger car business into several countries, including Japan, Sweden, Germany and Israel, in the past two months.

BYD's NEV sales in August were 174,915 units, the sixth consecutive month of record highs, according to a September 2 announcement.

From January to August, BYD's cumulative new energy vehicle sales were 978,795 units, up 377.3 percent from 205,071 units in the same period last year. The company stopped production and sales of vehicles powered entirely by internal combustion engines in March.