Li Auto's management could achieve its goal of transitioning from EREV to BEV, but the road ahead could get much rockier, said Edison Yu's team.

Deutsche Bank analyst Edison Yu's team lowered their price target on Li Auto further, just less than 10 days after the last cut, as second-quarter earnings made them more cautious about the company.

Li Auto closed down 4.51 percent to $31.09 on Tuesday in the US, and the latest price target implies a 10 percent downside. 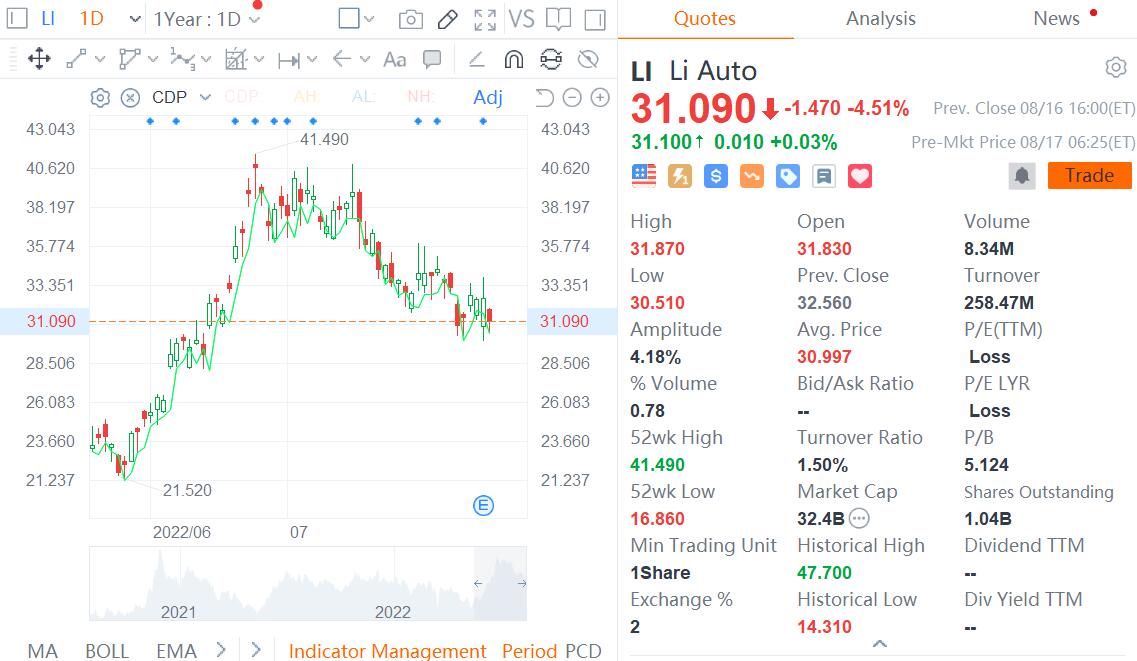 The automaker reported solid second-quarter earnings on August 15, but guidance for the third quarter was weak.

Li ONE sold 13,000 units in June, but could be as low as 4,000-5,000 units by this month and next without experiencing any sort of supply chain bottleneck.

Li Auto now has to rapidly deploy new models to properly attack the ever-changing EV market. However, the company is clearly relying more on EREVs than BEVs for sales growth in the coming years, Yu's team noted.

This has helped improve profitability, but Li Auto's management risks missing the "forest for the trees," according to the team. They further states:

EREV has always been a stop-gap approach (possessing little strategic technological value in our view), not an end-game solution.

Should this really be the centerpiece of a company's roadmap for the next few years as aggressive BEV competition emerges?

We think perhaps not and frame this in the context of NIO having >1k swap stations and in-sourcing battery cells, and attempting to cultivate a local ecosystem in Europe which represents a large and relatively less competitive market for EVs.

The team lowered their forecast for Li Auto's full-year deliveries this year from 160,000 to 140,000 to account for much lower sales of the Li ONE.

Looking ahead to 2023, the team believes Li Auto is expected to launch another EREV model called the Li L7 (X03) by the end of the second quarter, expanding its model lineup to three EREV SUVs.

The team expects production capacity for the Li L8 and Li L9 to be 20,000-25,000 units per month, operating in two shifts. After production of the Li ONE is phased out, the company will convert that capacity to the L-Series, worth at least 15,000 per month.

The team does not believe Li Auto will offer the same level of value for BEVs as it does for EREVs, which could limit initial demand.

Yu's team believes Li Auto's management can achieve its goal of transitioning from EREVs to BEVs, but the road ahead could get much rockier.

Li Auto offers over $1,000 in incentive for Li ONE as demand becomes unexpectedly weak