CITIC Securities sees both supply and demand improving for NIO, Li Auto, and XPeng, and the Chinese EV industry facing a high boom in the second half of the year.

CITIC Securities is bullish on the performance of NIO (NYSE: NIO, HKG: 9866, SGX: NIO), XPeng Motors (NYSE: XPEV, HKG: 9868), and Li Auto (NASDAQ: LI, HKG: 2015), in the second half of the year, as their production and sales volumes recovered and new product deliveries are imminent.

In June, NIO, Li Auto, and XPeng sold 12,961, 13,024, and 15,295 electric vehicles (EVs), respectively, representing growth rates of 85 percent, 13 percent, and 51 percent, respectively, from May, implying that both supply and demand are improving, said CITIC Securities analyst Xu Yingbo's team in a research note on Monday.

The team believes that as China's new carmakers enter the new product cycle in 2022 with significantly higher product maturity compared to the initial generation, the market is expected to gradually recognize the strengths of these companies in terms of talent attraction, technology accumulation and responsiveness to local demand.

NIO, Li Auto, and XPeng all met their previous guidance for sales in the second quarter, and their new models are about to start deliveries, the team noted.

NIO launched the new ES7, a large 5-seat SUV based on the NT 2.0 platform, on June 15. it also unveiled the 2022 ES8, ES6 and EC6, priced RMB 18,000 higher compared to previous versions, but with improved intelligence and performance, the team said.

Li Auto unveiled its second model, the Li L9, on June 21, continuing the flat pricing mechanism of the company's first model, the Li ONE, which will begin deliveries in late August.

With more than 30,000 orders within 72 hours of launch, the Li L9 has the potential to become a hot-seller, CITIC Securities said, adding that the model's biggest selling points are space and smart interactions at half the price of competing models of the same size.

XPeng pushed an enhanced version of LCC (Lane Centering Control) to the XPeng P5 via OTA on July 1, the first in China to use LiDAR for that feature in a production vehicle, CITIC Securities noted.

Separately, XPeng Chairman and CEO He Xiaopeng said on Weibo that the company's new SUV, the G9, is moving forward with its launch rhythm as scheduled, with the model opening for pre-orders in August and officially launching in September, the team noted.

Similar to Citi's approach at the end of last month, CITIC Securities has proposed a new valuation methodology for the three companies.

A market cap/gross profit multiple is a more appropriate valuation approach for China's new car makers in 2022 to 2023, the team said.

Here is their reasoning:

Generally, it is difficult for a car company to achieve large profitability until they have in 2 factories and 400,000 units of annual capacity.

Therefore, gross profit can be an appropriate valuation approach in 2022-2023 when the new carmakers' sales are growing rapidly but not reaching profitability.

CITIC Securities believes that based on this new valuation method, the valuation multiples of the three Chinese new carmakers are already comparable to those of traditional automakers.

Shares of NIO, Li Auto, and XPeng traded in Hong Kong rose in early trading on Tuesday, up 2.84 percent, 4.36 percent, and 3.62 percent, respectively, at press time. 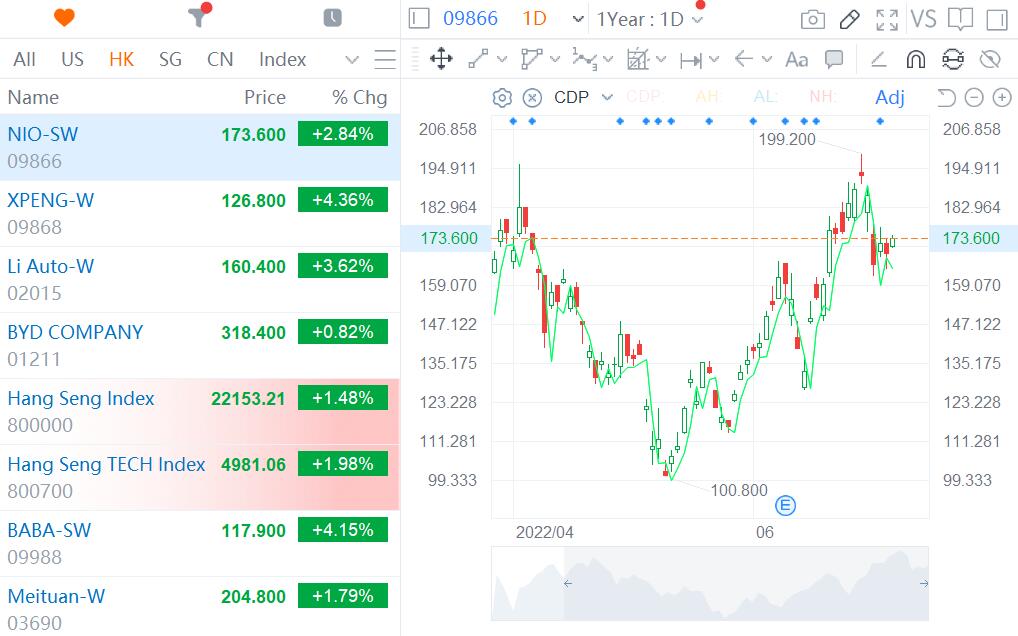