Lithium carbonate prices have stopped rising for the first time in nearly 18 weeks, with buyers in a growing wait-and-see mood and sellers starting to loosen their offers. 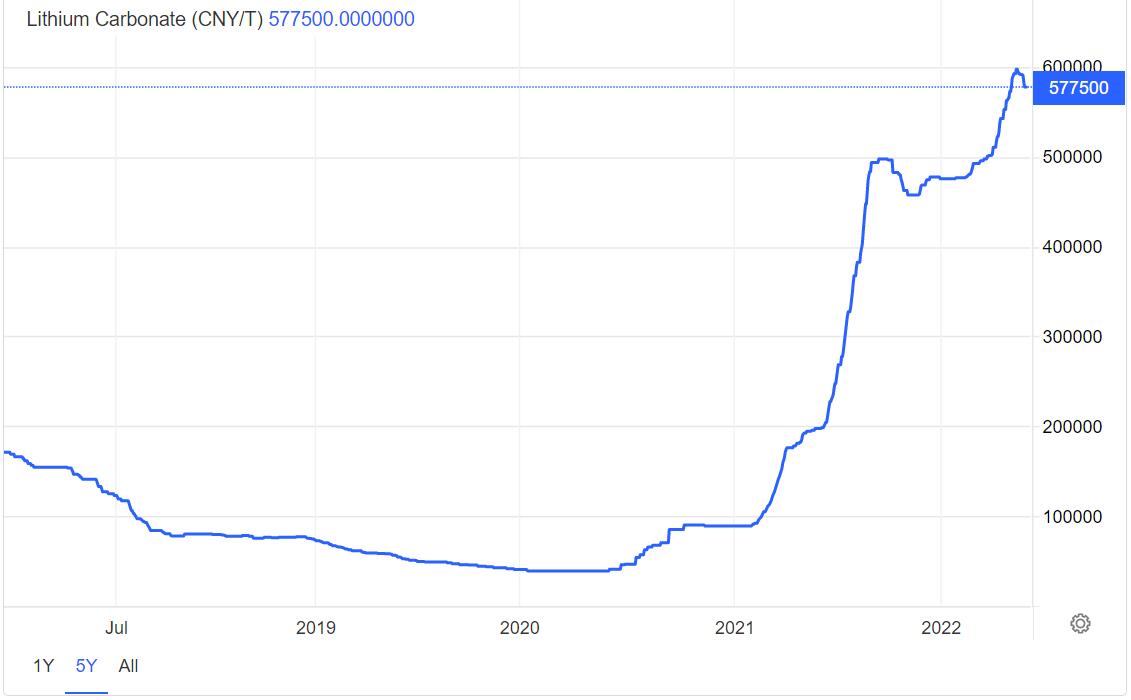 After continued sharp increases, the price of lithium, a key raw material for power batteries, appears to be starting to show a loss of momentum for further increases.

The price of lithium carbonate has recently shown signs of stabilization, with upstream sellers starting to loosen their offers, the official Chinese paper Securities Times said in a report today.

The price of battery-grade lithium carbonate was RMB 570,000 ($79,800) per ton last week, unchanged from the previous week and the first time in nearly 18 weeks that it stopped rising, the report said, citing Everbright Securities.

The average price of battery-grade lithium carbonate reached RMB 590,000 per ton in mid-November but was stable for a dozen days in a row before moving downward recently, Mysteel's data showed, the report said.

Recent demand for new energy vehicles is less than expected, the overall mood of buyers' procurement is not high, the Securities Times quoted industry sources as saying.

"Previously, we were trying to find sources to buy lithium carbonate, but recently many channel people have taken the initiative to sell lithium carbonate to us," the report quoted a battery cathode material maker in southwest China as saying.

Negotiating on the price of lithium carbonate is also much easier now than before, the source said.

In the second week of November, the price of battery-grade lithium carbonate in China at one point exceeded RMB 600,000 per ton. Then there were rumors that several battery makers were planning to cut production, but this was denied by some major players.

While CATL, Eve Energy and Gotion High-tech denied the rumors, the panic appears to have started to spread, the Securities Times said in the report today.

"Traders are clearly governed by emotions and there will be panic selling once they see the first signs of something wrong," the report quoted the above cathode material plant as saying.

Towards the end of the year, traders have the need to bring back their capital, and with the recent increase in low-priced sources on the market, buying lithium carbonate is not as difficult as before, the source said.

"Although traders don't have many sources, price fluctuations are more obvious and can have some impact on producers' offers," the report quoted Qu Yinfei, an analyst at market research firm Oilchem, as saying.

Once the price of lithium carbonate in the hands of traders loosens, it will quickly attract downstream customers, thus making lithium carbonate producers feel that customers are not interested in purchasing at high prices, and thus will make adjustments to prices, Qu said.

It's worth noting that as lithium carbonate prices stop rising, the wait-and-see mood among downstream customers grows stronger, according to the report.

In a November 28 research note, Morgan Stanley sees the potential for a material adjustment in lithium prices in 2023 as headwinds to demand growth allow supply to catch up.