Every RMB 100,000 increase in the price of lithium carbonate will have a 2 percentage point impact on NIO's gross margin, the company's CEO previously said. 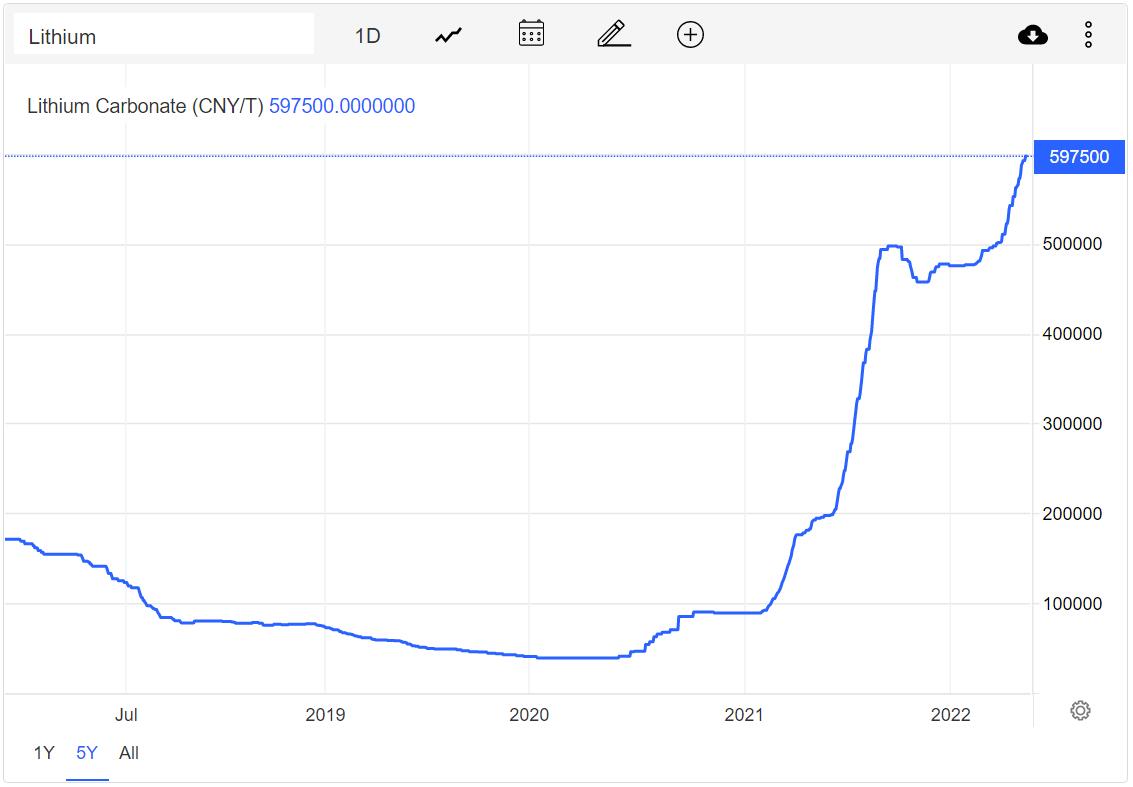 As one of the key raw materials for power batteries, the continued rise in lithium prices seems to show no sign of stopping, which will keep the entire new energy vehicle (NEV) industry under pressure.

Battery-grade lithium carbonate prices in China exceeded RMB 600,000 ($85,380) per ton at one point last week, continuing to hit record highs, the Securities Times noted in a report on Monday.

A downward inflection point in lithium prices could come as early as the second half of 2023, the report said, citing industry sources.

The price per ton of lithium carbonate will remain above RMB 520,000 in the first half of 2023, and is expected to decrease to around RMB 450,000 in the second half of the year, before dropping to below RMB 400,000 by 2024, the report said, citing Zhang Xiaofei, chairman of lithium industry research firm GGII.

Recently there were rumors that battery makers were planning to cut production as lithium carbonate prices rose to RMB 600,000 per ton. But this has been denied by some mainstream producers.

Eve Energy is currently in normal production, with output essentially flat for the last two months, and is still mostly accelerating deliveries, China Securities Journal said in a report today, citing sources at the company.

Gotion High-tech said the company is currently maintaining full production capacity as planned, and capacity is also continuing to ramp up to secure supply, according to the report.

For automakers, they will also have to bear some higher battery costs.

Lithium carbonate prices, if they stay this high, will have a relatively big impact on NIO's gross margin, William Li, the company's founder, chairman and CEO, said in a conference call with analysts after announcing third-quarter earnings on November 10.

For every RMB 100,000 increase in lithium carbonate price, there will be a 2 percentage point impact on NIO's gross margin, Li said.

However, Li does not believe the continued rise in lithium carbonate prices is due to a supply-demand imbalance, but rather to speculation.

Zhu Huarong, chairman of Chinese auto giant Changan Automobile, said in a November 9 speech at the 2022 China Auto Forum that high battery prices are caused by factors including raw material price hikes, speculation by capital, sellers' hesitation to sell and hoarding by middlemen.

Zhu said that China should carry out a crackdown on the profiteering of some players and stop some companies from hoarding and speculating on raw materials.