Morgan Stanley sees the price of lithium carbonate in China falling to $47,500 per ton in the second half of 2023, implying a 35 percent drop from the current spot. 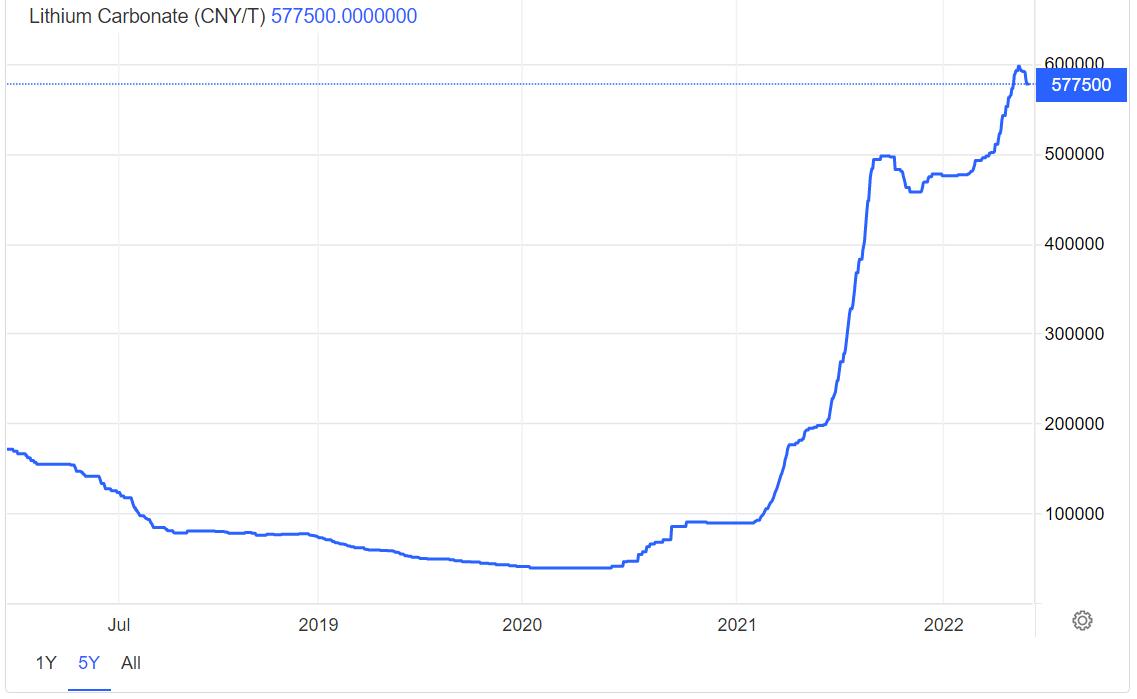 High prices for lithium are plaguing electric vehicle companies, but in the view of analysts at Morgan Stanley, that will ease significantly next year, though it will come at a cost.

"We see a price inflection in 2023, as decelerating demand growth will ease market tightness," analysts, including Marius van Straaten, said in a November 28 research note.

Lithium prices in 2023 are likely to see a material correction as headwinds from demand growth allow supply to catch up, the team said.

China's battery electric vehicle (BEV) penetration is already above 20 percent and subsidies will be partially phased out, which will slow growth in 2023, according to the team.

In addition, there appears to be an overproduction of batteries in China, which may not last, or even reverse, when EV sales growth slows, the team said.

As one of the key raw materials for power batteries, the continued rise in lithium prices has put continued profitability pressure on the entire new energy vehicle (NEV) industry.

The spike in core raw material prices is hitting battery makers first. For car companies, they will also have to bear higher battery costs.

Every RMB 100,000 increase in lithium carbonate prices will have a 2 percentage point impact on NIO's gross margin, William Li, NIO's founder, chairman, and CEO, said in a conference call with analysts after the company announced its third-quarter earnings on November 10.

It is worth noting that the price of lithium carbonate has dropped slightly in China in recent days and is now around RMB 577,500.

In the long term, however, Morgan Stanley believes there will still be a supply shortage of lithium that could slow the transition to EVs.

While the lithium sector has an impressive pipeline of projects, long-term supply growth looks challenging given the execution risks, the team said.

Developing and upgrading new greenfield lithium projects is proving difficult, with four main risks. According to Morgan Stanley, the risks are:

" Once potential supply is risk-adjusted, a longer-term shortfall emerges, rather than an oversupplied market if we were not to make such an adjustment," the team wrote.

A structural lithium shortage could hamper long-term EV volumes if not enough projects come through.

Morgan Stanley sees a 16 percent compound annual growth rate in lithium demand through 2030, much higher than other metals and a potential long-term obstacle to the EV transition.

The team believes the lithium supply will struggle to keep up, and could see a 22 percent shortage by 2030.

Nonetheless, such a large deficit is unlikely to happen in reality because the market is physically balanced, the team added.

Based on their view of available supply, Morgan Stanley's model implies that the global BEV market will only sustain a 33 percent sales penetration, compared to their base assumption of 43 percent.