XPeng's City NGP is already available in Guangzhou in pilot form, while its flagship G9 SUV will be officially launched a day later. 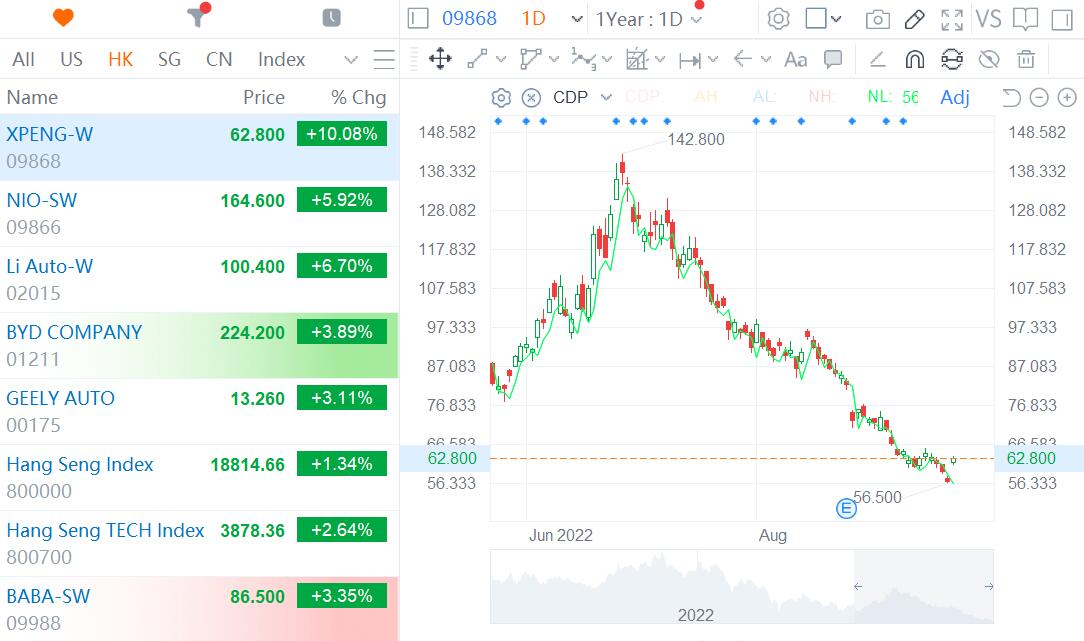 Shares of XPeng Motors traded in Hong Kong jumped in early trading, as two major catalysts began to kick in.

At press time, XPeng was up 10.08 percent to HK$62.8, ending a four-day losing streak that preceded it. However, the stock is still down about 54 percent from its recent high on June 27, as demand concerns linger for investors.

XPeng announced on September 17 that its City Navigation Guided Pilot (City NGP) feature is available on a pilot basis in Guangzhou, where the company is headquartered, making it the first Chinese car brand to introduce advanced driver assistance system (ADAS) features for complex urban traffic situations to the mass market.

Some XPeng P5 customers in Guangzhou can now get access to City NGP via an OTA update, underscoring a key milestone in the development of the company's in-house autonomous driving technology, it said in a press release.

In a research note published on June 27, CICC, a top Chinese investment bank, believes that XPeng's update on the progress of the City NGP feature is expected to be a central catalyst for its share price to rise.

CICC believes that the market was not fully aware of City NGP because XPeng's full-stack, self-developed technology advantage in low-level autonomous driving scenarios has not made the market and consumers feel the obvious technology generation difference.

In addition to the launch of City NGP, another critical catalyst for XPeng is the G9 SUV that will be officially launched a day later.

XPeng will officially launch its fourth production vehicle, the flagship G9, on September 21, and the event will begin airing that day at 7 pm Beijing time, the company announced in a press release on September 16.

XPeng unveiled the G9 at the Guangzhou auto show in late November last year and announced on August 10 that the model was available for consumer pre-orders. On August 11, the company said the G9 reached 22,819 pre-orders in 24 hours.

Edison Yu, an analyst at Deutsche Bank, said in a September 13 research note that the G9's launch is expected to be a catalyst for a temporary rally in XPeng shares.

"The stock deserves to be down in our view but we anticipate a temporary bounce back with the official launch of the G9 (shares already -33% over the past month vs. NASDAQ -6% and NIO +3%)," the research note said.

For NIO, its founder, chairman and CEO William Li, as well as co-founder and president Qin Lihong, were in Germany and took a ride in the company's ES8.

On September 16, NIO announced that its NIO Power Europe Plant in Budapest, Hungary, saw the first battery swap station roll off the line, and it will be shipped to Germany.

No recent news on Li Auto.