NIO among top 3 most popular firms for young talents in China, report shows

NIO ranked third, behind ByteDance and Meituan, and ahead of Tencent.

China's new energy vehicle (NEV) industry is rising rapidly, while the traditional Internet industry's growth is slowing significantly, and the flow of young talents is also reflecting this trend.

In the first half of the year, NIO, Geely, BYD, Li Auto, Tesla, and XPeng Motors ranked among the top 30 most popular companies for young talents in China, according to a new report from local recruiting platform Liepin.

In the first half of the year, NIO came in third place among the companies receiving the most resumes from young talents, behind tech giant ByteDance and food delivery company Meituan, and ahead of social media and gaming giant Tencent, which came in fourth place. 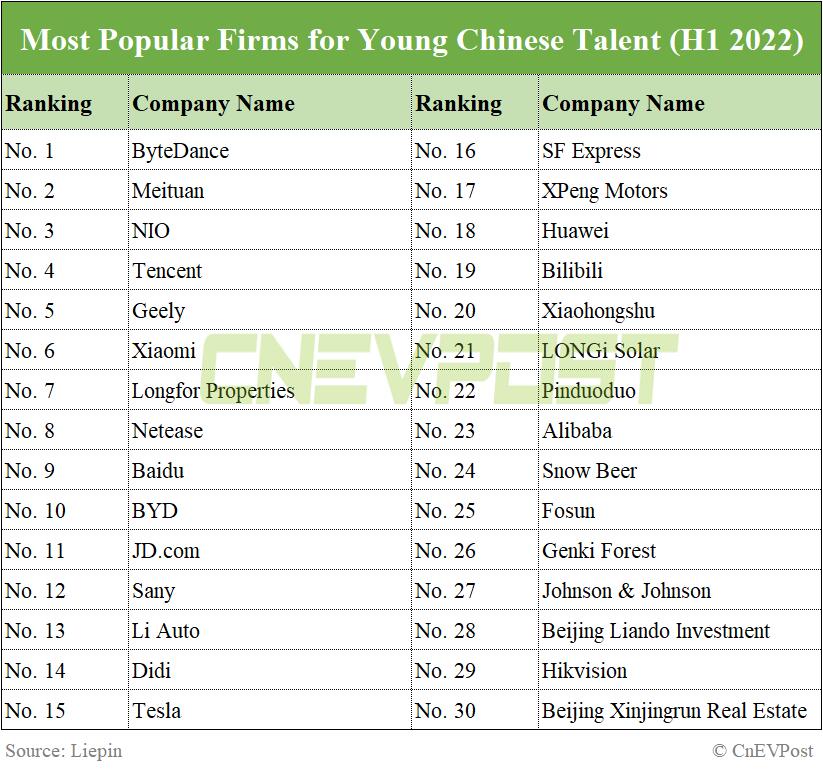 Geely came in fifth, BYD in 10th, Li Auto in 13th, Tesla in 15th and XPeng in 17th, according to the report released on Monday.

With the NEV industry heating up rapidly, the leading companies that stand out are more likely to be favored by young talents, Liepin's report said.

As the boom in the Internet and mobile Internet industries receded due to the general environment, the percentage of young talents applying for positions in the industry slipped the most, falling 9.07 percentage points, according to the report.

Among them, pharmaceutical and bioengineering, new energy industry 2022 saw the largest increase in the first half of the year, up 1.42 and 1.31 percentage points respectively over the same period last year, according to the report.

Behind this is the rapid development of NEV companies, providing a large number of job opportunities.

The brand appeal of NIO, XPeng and Li Auto is gradually increasing, and coupled with good salary packages and room for growth, it is very normal to attract more young people, the source said.

The number of college graduates in China has continued to grow over the past few decades, surpassing 10 million for the first time this year.

It is worth noting that against the backdrop of slowing economic growth, youth unemployment in China is currently at an all-time high. The surveyed unemployment rate for people aged 16-24 was 19.9 percent in July, according to data released Monday by China's National Bureau of Statistics.