China's July retail sales of NEVs expected to be around 450,000 units, CPCA says

EV makers including NIO, Tesla and GAC Aion have further increased capacity and are expected to see increased production in the second half of the year, the CPCA said. 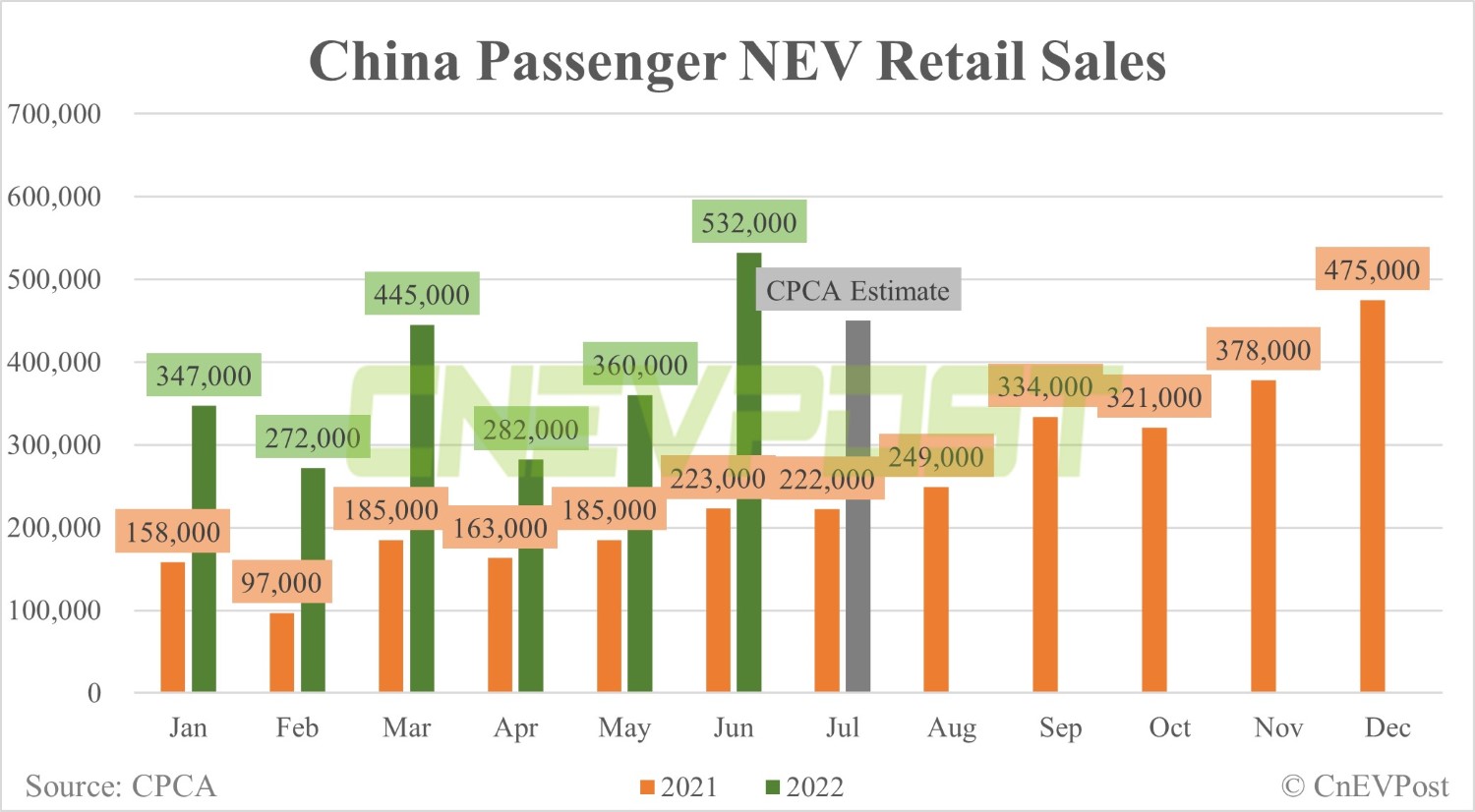 Based on preliminary estimates, retail sales of new energy vehicles (NEVs) in China are expected to be around 450,000 units in July, up 102.5 percent year-on-year, the China Passenger Car Association (CPCA) said in a report released today.

Retail sales of all passenger vehicles in July are expected to be around 1.77 million units, up 17.8 percent year-on-year, the CPCA said, adding that their survey on July retail sales targets for automakers showed that manufacturers accounting for about 80 percent of the overall market were aiming for double-digit year-on-year growth.

The Covid situation in China was generally stable in July, with supply chains and vehicle production operating normally and supply shortages improving, the CPCA said in the report today.

Average daily retail sales of major vehicle companies in China rose 16 percent year-over-year in both the first and second weeks of the month, the CPCA said, adding that the growth rate is expected to be 19 percent and 17 percent in the third and fourth weeks, respectively.

The overall support for the car market from the halved purchase tax policy was slightly weaker in July than in June, as a large amount of consumer demand had been quickly released in June, the CPCA said.

As a backdrop, Chinese consumers are eligible for purchase tax exemptions on NEVs, and the country has reduced the purchase tax on ICE vehicles since June in an effort to spur economic growth.

The purchase tax was reduced from 10 percent to 5 percent for passenger vehicles of 2.0-liter displacement and below with a purchase date between June 1 and December 31 and a price not exceeding 300,000 yuan ($45,060).

The CPCA said capacity utilization of NEV manufacturers is recovering rapidly, and companies including NIO, Tesla, and GAC Aion have further increased capacity and are expected to see increased production in the second half of the year.

In addition to improved supply, acceptance of NEV products is gradually increasing among consumers, and the market will continue to grow until purchase subsidies are completely removed by the end of the year, the CPCA said.

China's Ministry of Finance released plans on April 23, 2020, to reduce the country's subsidies for NEVs each year, saying that in principle the subsidies will be reduced by 10 percent, 20 percent and 30 percent each year from 2020-2022, respectively, from the previous year.

Last December 31, China's Ministry of Finance specified in an announcement that the subsidy policy will not be continued starting in 2023.

It's worth noting that July is usually a slow month for the Chinese auto market, and this year's unusually hot weather is also potentially affecting sales.

China's NEV sales in June beat expectations and hit a record high, but the market has recently begun to worry about weakening demand in the first two weeks of July, local brokerage CICC said in a research note earlier this week.