CICC raised its price target on XPeng to $45, saying the pace of the City NGP launch is expected to be a core catalyst for its share price rise. 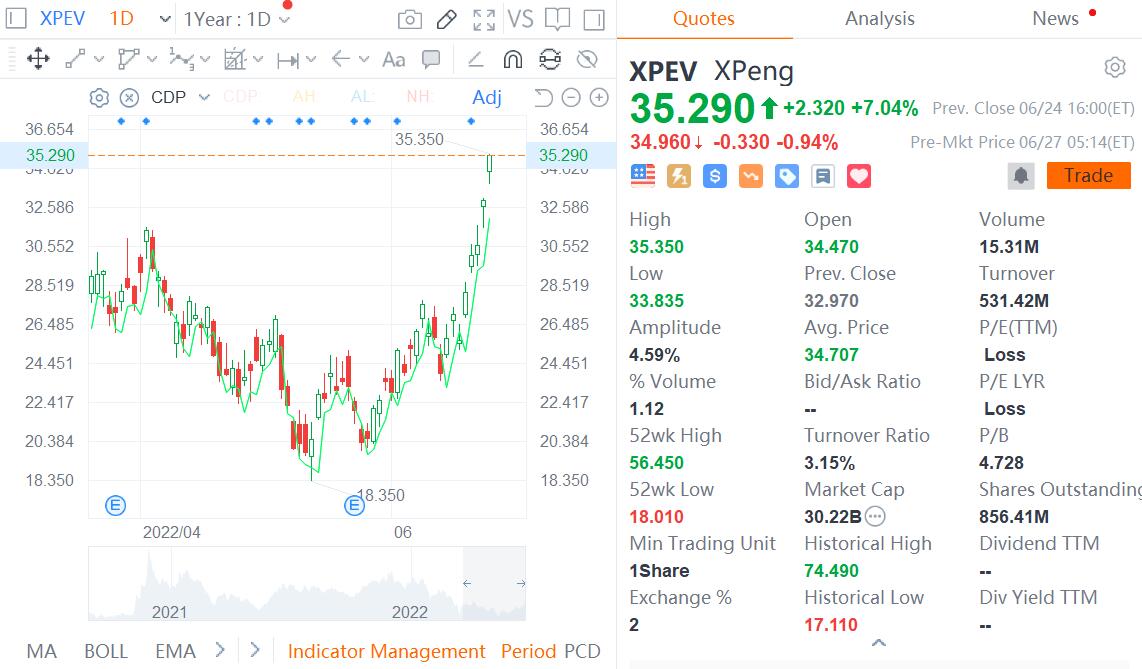 CICC believes XPeng is a leader in autonomous driving technology and that the market is currently undervaluing it in four areas.

CICC believes the market is currently not fully cognizant of the pace and experience of volume production of XPeng's Urban Navigation Guided Pilot (NGP) feature, saying that updates on the feature's progress are expected to be a core catalyst for its share price to rise.

XPeng plans to launch the City NGP feature in China later this year, and the company's chairman and CEO, He Xiaopeng, has said it will outperform Tesla's FSD.

CICC believes that the market is not fully aware of City NGP's capabilities at this time because XPeng's full-stack, in-house technology advantage in low-level autonomous driving scenarios has not made the market or consumers feel the obvious technology generation difference.

The mass production of XPeng's City NGP is expected to allow automakers to start competing on complex urban roads, and the level of full-stack capability will be reflected in the difference in smart driving experience, according to CICC.

Based on its deep technical reserves, XPeng is expected to be one of the first winners in the second half of the intelligent driving competition, according to CICC.

Notably, XPeng today released a video of Mr. He's personal experience with City NGP, demonstrating the capabilities of the feature.

CICC believes that the market is overly pessimistic in its interpretation of XPeng's adjustment in the software payment model.

As a background, XPeng made an adjustment to its pricing system at the beginning of May, and more than half of its models will come with XPilot software as standard.

The elimination of separate software payments doesn't mean that the business model for autonomous driving software is difficult to justify, but rather that XPeng intends to lower the barrier to use, thereby increasing the software's penetration, and nurturing user habits, according to CICC.

This will help accelerate the iteration of algorithms, accumulate users for XPilot 4.0 and achieve leadership in higher-level autonomous driving, according to CICC.

From the financial point of view, XPeng also canceled free charging and free home charging piles while canceling software fees, and its sales of higher-trim models increased significantly, so the impact on gross margin is neutral to optimistic, CICC said.

In addition to smart driving technology leadership, XPeng is also making rapid progress in electrification technology as well as car building technology, according to CICC.

Starting with the G9, a number of XPeng's flagship technologies will begin mass production, which is expected to expand the competitive advantage of its products, according to CICC.

The company plans to achieve the autonomous design and deep integration of hardware in its new platform in the future, with deep integration of intelligent driving, cockpit, chassis and powertrain, which is expected to improve overall technical strength and reduce costs, CICC said.

CICC also believes that in the medium to long term, XPeng's new platform is expected to drive profitability to see structural improvements.

There are current market concerns about the company's low gross margins on vehicle sales of slightly more than 10 percent despite leading delivery volumes, CICC noted.

XPeng's current low gross margin is mainly limited by the older platform of existing models, and in the short term, its gross margin improvement will come from an improved product mix brought about by the expansion of deliveries of models within the P7 and G9, according to CICC.