CITIC Securities was one of a handful of China-based brokerages last year that believed BYD's market capitalization would reach 1 trillion yuan by 2022. 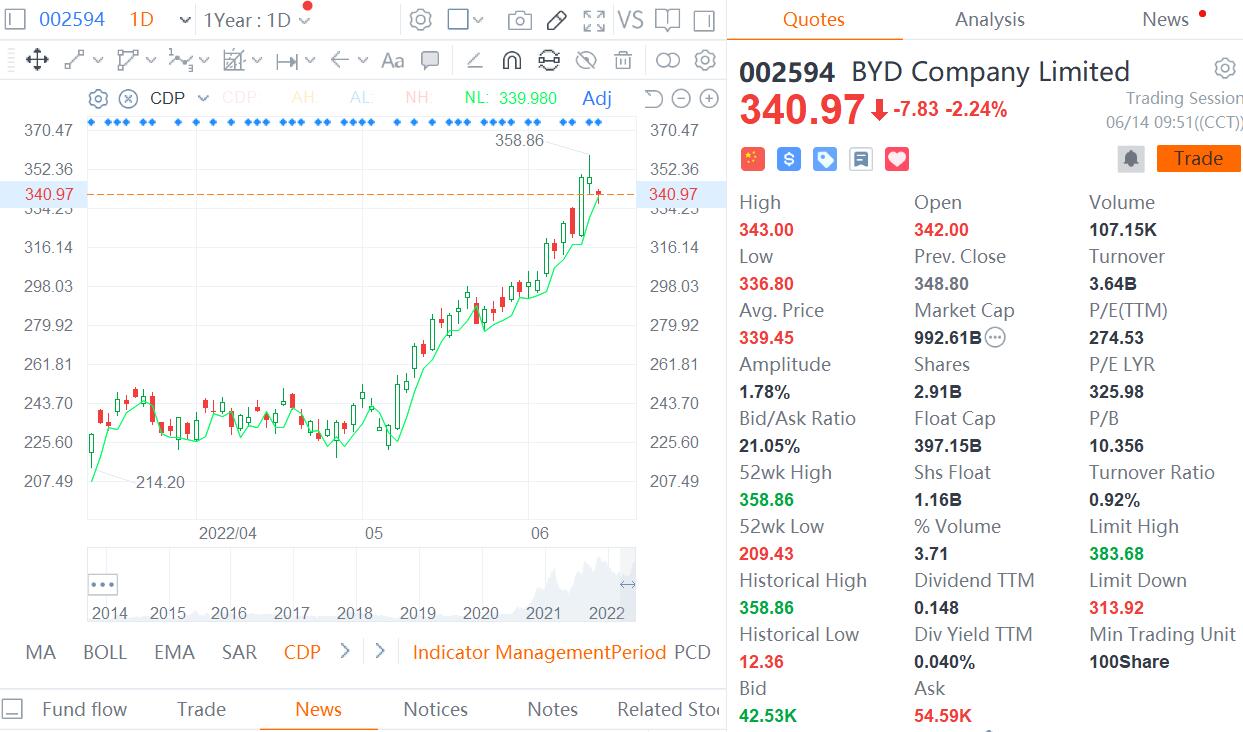 CITIC Securities was one of a handful of China-based brokerages last year that believed BYD (SHE: 002594, HKG: 1211, OTCMKTS: BYDDY) should be worth RMB 1 trillion.

With BYD reaching that milestone, the team now sees the new energy vehicle (NEV) giant having the potential of rising another 40 percent in a research note widely circulated in Chinese investment circles.

Reaching a market capitalization of RMB 1 trillion is a new beginning for BYD, and the company's efforts in high-end markets, global markets and smart driving will open up new growth, CITIC Securities said in a research note on Monday.

CITIC Securities maintains a "Buy" rating on BYD's shares traded in the China A-share market and Hong Kong stock market, with a target price of RMB 481.1 and HK$562.6, respectively.

On August 17, 2021, CITIC Securities said in a research note that BYD's reasonable market capitalization in 2022 is RMB 1.0643 trillion, which corresponds to its A-share and H-share target prices of RMB 372 and HK$447, respectively.

In their latest research report on Monday, CITIC Securities is bullish on BYD's growth in the premium market, global market and smart driving segment.

The Han's hot sales validate the competitiveness of BYD's electric products and is the first model to hold steady in the RMB 200,000+ price band since its first NEV, the F3DM, was launched in 2008, the team said.

BYD released the first B-class sedan Seal on May 20, equipped with new technologies including CTB, iTAC for the first time, with a pre-sale price range of RMB 2128,000 - 289,800 yuan. Pre-orders for the model exceeded 20,000 on the day of the launch, showing that it has the potential to be a hot seller, the team said.

BYD will further stand firm in the price band above RMB 200,000 with the Seal, while the Denza brand will be responsible for tapping the market above RMB 300,000.

In addition, the company's luxury brand priced above RMB 500,000, which are expected to be released in the next six months, is also expected to roll out hot sellers, and these mean BYD has a steep brand upgrade curve, CITIC Securities said.

In the global market, with the gradual improvement of the model matrix, BYD is about to increase its efforts in overseas markets, according to the team.

BYD has been exploring the European market through the public transportation sector since 1998 and has built up a good brand reputation in Europe over the past 20 years, CITIC Securities said.

BYD's electric vehicles now have significant advantages over competitors and are well-positioned for expansion in overseas markets, the team said, adding that its overseas efforts are expected to accelerate in the future as its high-end and luxury model matrix is gradually improved.

In addition, BYD has invested in outstanding companies in LiDAR, high-precision maps and chips, the team noted.

On June 10, BYD's shares traded in Shenzhen rose 8.19 percent to RMB 348.8, with a total market capitalization of RMB 1.02 trillion, surpassing RMB 1 trillion for the first time.

As of press time, BYD's shares traded in Shenzhen fell 2.24 percent to RMB 340.97, returning to a market cap of RMB 992, amid a general decline in the A-share market.