NIO has risen for a fourth straight day in Hong Kong, bringing its cumulative gain since May 13 to about 30 percent.

As of press time, NIO was up 7.65 percent, its fourth straight day of gains, bringing its cumulative gain since May 13 to about 30 percent. 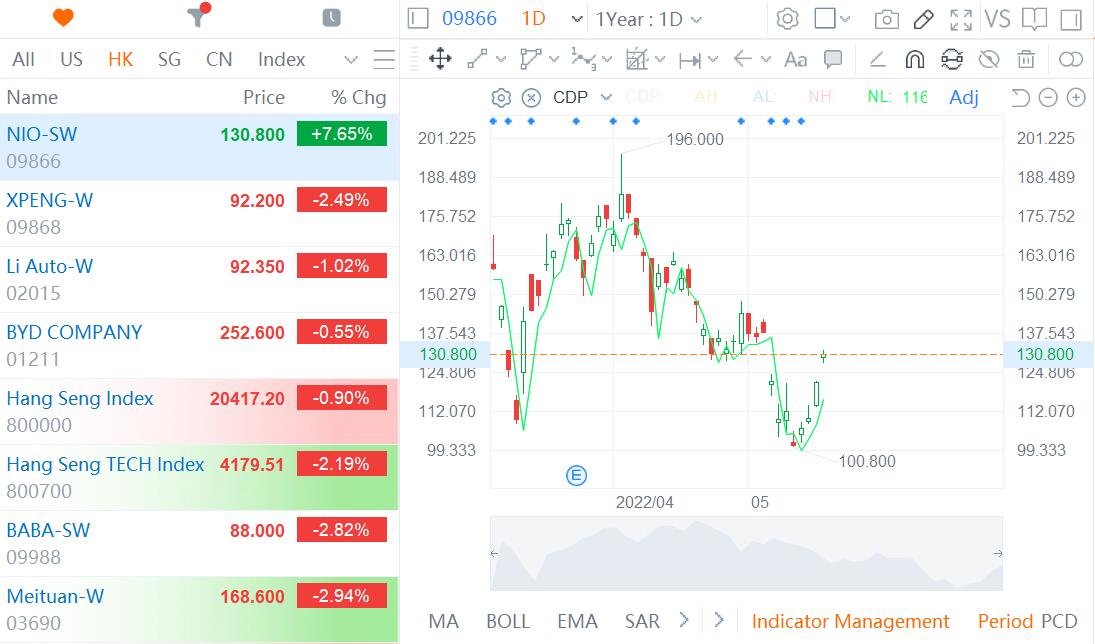 Hong Kong stocks were lower overall today after yesterday's gains, with the Hang Seng Index down 0.9 percent and the Hang Seng Tech Index down 2.19 percent. Alibaba and Meituan are both down about 3 percent.

Stocks of Chinese companies trading in the US surged overnight, with the Nasdaq Golden Dragon China Index closing up 5.2 percent. NIO jumped 14.3 percent in the US, outperforming XPeng's 5.79 percent and Li Auto's 7.81 percent.

The performance may be due to further signals from the Chinese government to support the private sector and the continued decline in new Covid cases.

Chinese Vice Premier Liu He said at a conference yesterday that the country supports the continued healthy development of platform economy and private economies and the need to manage the relationship between the government and the market, according to a CCTV report.

China also supports the listing of digital companies in domestic and international capital markets to promote competition and innovation in openness, he said.

In addition, China is expected to release new policies in early June to stimulate auto consumption in rural areas, according to a report in the China Securities Journal on Tuesday.

For NIO, Bank of America (BofA) upgraded its rating on the company as well as its price target on Monday, saying the negatives have been priced in.

Analyst Ming Hsun Lee raised his rating on NIO to Buy from Neutral and raised his price target to $26 from the previous $25, expecting higher sales levels to lead to better margins in the second half of 2022.

NIO is also expected to list and start trading in Singapore this Friday.