NIO's deliveries were back ahead of Li Auto's for the first time since last September. 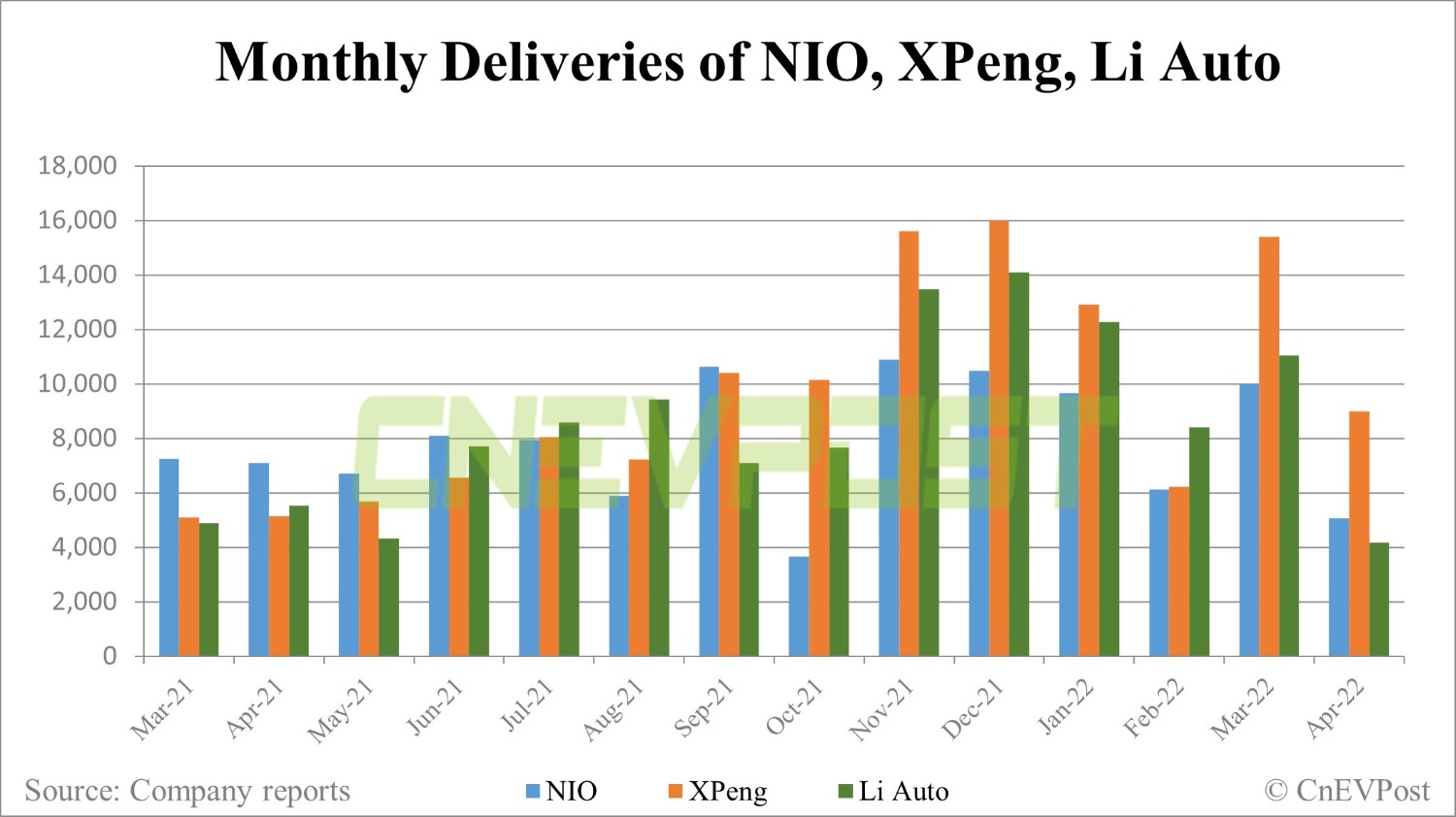 Some readers may wonder how these three companies compare, and how they compare to the broader industry.

NIO is the only one of these three companies that has made announcements about seeing temporary production shutdowns, but was not the hardest hit by the supply chain disruptions.

This also puts NIO back ahead of Li Auto in terms of deliveries for the first time since last September.

In a research note sent to investors on April 27, Yu's team said that XPeng's production and logistics appeared to be the least affected by the lockdown in Shanghai.

Other cities have also experienced lockdowns, and XPeng's supply chain management appears to be more resilient than its peers, perhaps because it has a large number of alternative suppliers, Yu said.

The company has a very large order backlog that can extend for months, which means demand should remain well above supply for the foreseeable future, according to Yu.

So far this year, China's auto supply chain has been hit first by the Covid lockdown in Jilin, one of the province's most important suppliers of auto parts.

In late March, the lockdown in Shanghai delivered another blow to the industry, causing serious disruptions to auto parts supplies in the city as well as in surrounding cities.

Li Auto's Changzhou base is located in the heart of the Yangtze Delta, where more than 80 percent of the company's parts suppliers are located, with a large portion of them in Shanghai and Kunshan, Jiangsu province, said Shen Yanan, co-founder and president of Li Auto.

As a result of the Covid outbreak in the region, some suppliers in Shanghai and Kunshan were unable to supply, and some even shut down production completely, making it impossible for Li Auto to maintain production after its existing parts inventory was absorbed, Shen said.

This had a significant impact on Li Auto's production in April, resulting in delayed delivery of new vehicles for some customers, according to Shen.

NIO said on April 9 that it suspended production as Covid caused its supply chain partners in Jilin, Shanghai, Jiangsu and many other locations to stop production.

On April 14, the Economic Observer quoted an unnamed NIO insider as saying that the company's supply chain had recovered slightly and that the Hefei production base was gradually resuming production.

XPeng did not suspend production, but on April 14, its chairman and CEO He Xiaopeng issued a warning that drew widespread attention and a lot of support.

He said at the time that if companies in Shanghai and neighboring cities' auto supply chains could not yet find a way to dynamically resume production, then by May possibly all car companies in China would have to shut down production.

Overall sales figures for China's auto industry, released by the China Passenger Car Association (CPCA) and the China Association of Automobile Makers (CAAM), are not expected to be released until the middle of this month, when the impact of Covid will be seen.

However, data released by the CPCA last week showed that daily retail sales of passenger cars in China averaged 27,000 units in the first to third weeks of April, down 39 percent year-on-year.

The resumption of work in the auto industry since April 18 is still in the process of resuming stress tests to normal production, and the low wholesale sales are normal, but the decline is still beyond expectations, the CPCA said last week.

In fact, comparing absolute numbers of NIO, XPeng and Li Auto deliveries is not very meaningful, although many people like to do so.

This is because the three companies are targeting very different markets, and the prices of their products vary widely.

XPeng targets a broader market, hoping to attract a younger demographic with a more affordable price and sexy products.

Li Auto, on the other hand, targets families with children, becoming one of the top models for young parents today.

In terms of average sales price, NIO is the highest of these three companies and XPeng is the lowest.