China, US in talks over on-site audit inspections, report says

The Chinese government is discussing with US regulators the logistics of allowing on-site audit inspections of Chinese companies listed in New York, according to Bloomberg.

Negotiations between the US and China over audit issues have become more urgent as the US Securities and Exchange Commission (SEC) has placed more Chinese companies on a provisional list for possible delisting, and positive signs appear to be emerging.

The Chinese government is discussing with US regulators the logistics of allowing on-site audit inspections of Chinese companies listed in New York, Bloomberg reported today, adding that it is a sign of progress in talks to keep the US stock market open to Chinese issuers.

Regulators on both sides are negotiating how to allow a team of inspectors from the US Public Company Accounting Oversight Board (PCAOB) to visit China so they can review audit procedures and access the reports of most of the 261 US-listed companies, the report said, citing people familiar with the matter.

The on-site inspections will initiate procedures to the satisfaction of the United States that its inspectors will be given full access to audit documents required by legislation passed during the Trump administration, according to the report.

Progress in the standoff, which has lasted 20 years, would show that Beijing is serious about boosting confidence in the market and striking a balance between national security concerns and business needs, the report said.

Since March, the SEC has been adding companies to a provisional list each week that could face delisting if the 2024 deadline set by Congress is not met.

The SEC's most recent update to the list was on April 21, when 17 companies, including Li Auto, BEST, CBAK Energy Technology, Luckin Coffee and Zhihu, were added to the list under the Holding Foreign Companies Accountable Act (HFCAA).

Under the HFCAA, the SEC has the authority to delist a foreign-listed company from the exchange if it fails to file reports required by the PCAOB for three consecutive years.

The 17 companies, the fifth to be added to the list, have until May 12 to provide evidence to the SEC that they do not qualify for delisting. If they are unable to do so, they will be placed on a firm delisting list.

The list was first released by the SEC on March 8 and has been updated four times since then, including BeiGene, Yum China, Zai Lab Limited, ACM Research, and HUTCHMED.

Currently, 11 companies, including these five companies and Baidu, have been included in the conclusive list of issuers identified under the HFCAA.

It's worth noting that Fang Xinghai, vice chairman of the China Securities Regulatory Commission (CSRC), said during the Boao Forum earlier this month that the CSRC's dialogue with US regulators is going very well, with video once a week to gradually get the details settled.

China will allow the PCAOB to conduct its review legally and reasonably, and this uncertainty is believed to be removed soon, he said.

Stocks of US-listed Chinese companies continue to move lower so far this month, with the KraneShares CSI China Internet ETF (NYSEARCA: KWEB) down about 13 percent for the month. 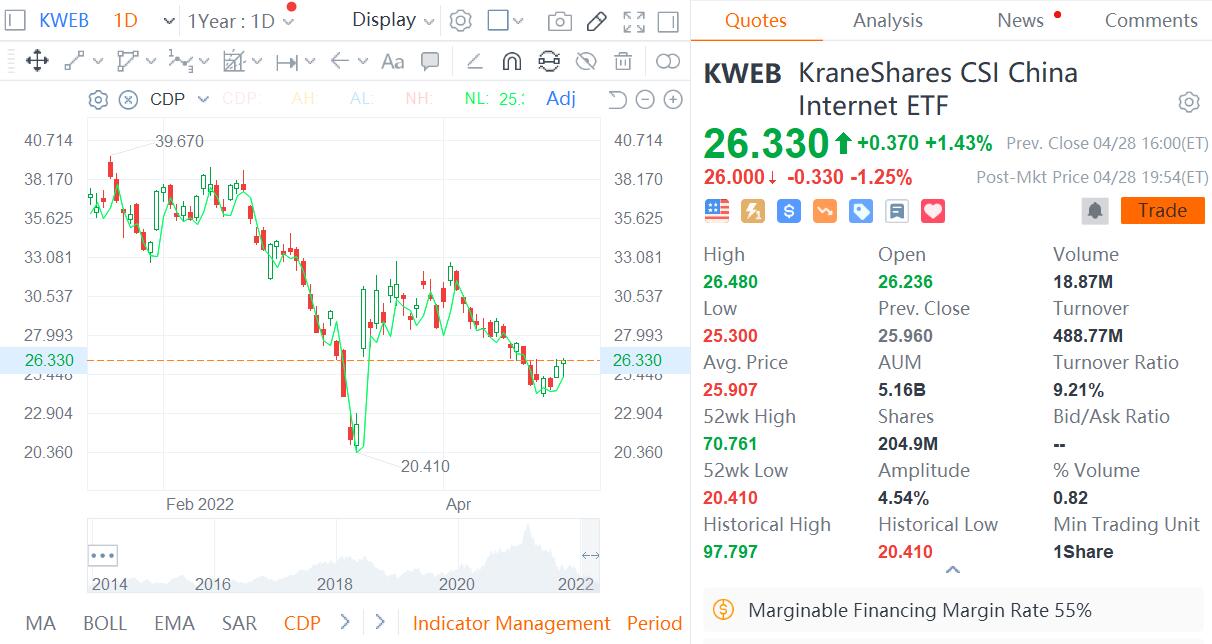