Edison Yu's team believes XPeng will see the biggest negative impact in deliveries in April, with deliveries only returning to closer to normal levels by June.

Shares of XPeng Motors (NYSE: XPEV, HKG: 9868) outperformed its peers last year, but have significantly lagged this year. In the view of Deutsche Bank analyst Edison Yu's team, the stock has been over-sold. 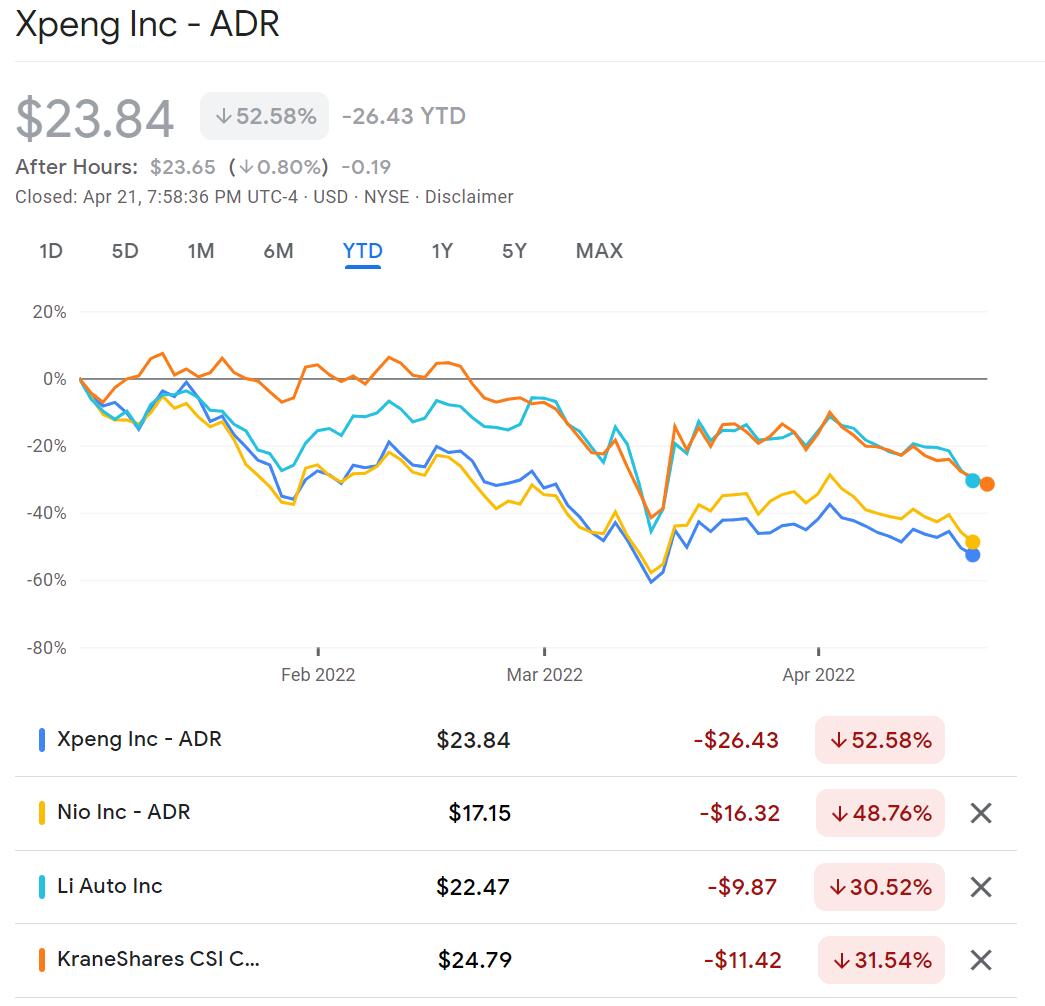 All of this will be more clearly recognized in the second half of the year once things return to normal for Covid-19 in China, the team said.

While orders continue to be strong, the team lowered its near-term delivery estimates on XPeng due to supply chain disruptions, but said directionally there is still strong demand to be met in the second half.

The team maintained its Buy rating on XPeng and its $55 price target. The company closed down 4.14 percent to $23.84 in the US on Thursday, and the price target price implies 131 percent upside.

Yu's team lowered their forecast for XPeng deliveries this year by 15,000 units to 190,000, implying a 94 percent year-on-year increase.

The team's base case is that XPeng deliveries will see the biggest negative impact in April, with a possible monthly drop of more than 40 percent.

They expect that delivery to recover by 30 percent in May, but still below the more than 15,000 units in March, with deliveries not returning to closer to normal levels until June.

This implies second-quarter deliveries of about 35,000 units, or roughly the same as last quarter.

XPeng's plant in Zhaoqing, Guangdong, has a capacity of about 20,000 units per month, and the new plant will come online in the third quarter to produce the new G9 SUV, the team noted.

The G9 should be the company's highest gross margin model, and total deliveries could reach 23-25,000 units/month this year, Yu's team said.

XPeng's factories are not directly affected by the Covid lockdown, but are facing component shortages related to parts from other parts of China, Yu's team noted.

Major cities in the south, including Shenzhen and Guangzhou, operated much better after the Covid outbreak than Shanghai, which represented only about 1,000 per month in sales for XPeng, the team said

The auto supplier base is clearly interconnected in many regions, but XPeng management has taken some steps to mitigate disruptions, Yu's team said, adding that they believe XPeng should perform well on a relative basis.

XPeng now has three sources on battery cells and has qualified hundreds of alternative suppliers, focusing mainly on low-end MCU chips, according to the team.

In addition, the situation in Shanghai is improving, with Tesla and SAIC restarting production this week and some related suppliers following suit. Broader transportation trends also appear to be improving, with the number of closed roads and service areas trending downward, the team noted.

The team's base case is that most of the supply base should come online at least by the end of the month and pick up in the first few weeks of May, reaching near-normal levels in June.

Growth stocks generally continue to be underappreciated, and the Covid outbreak in China is further complicating the situation, the team said.

However, with Chinese regulators apparently hoping to reach a compromise with the US Public Company Accounting Oversight Board (PCAOB), the risk of ADR delisting should be much more muted, according to the team.

"All in, we feel the risk-reward profile for XPeng after the pullback is quite favorable and believe the delta relative to LI should compress as the year progresses," the team said.