XPeng delivered 9,183 units of its P7 flagship sedan in March, marking the first time deliveries of the model exceeded 9,000.

XPeng Motors (NYSE: XPEV, HKG: 9868) delivered 15,414 vehicles in March, up 202 percent year-on-year and 148 percent from February, according to figures released today by the company. 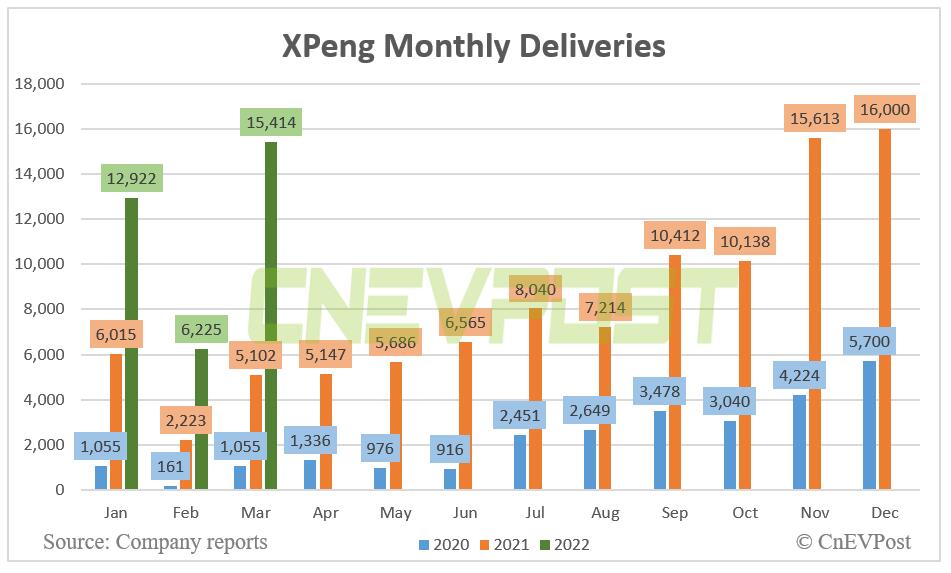 To accelerate the delivery of orders on hand, as well as new orders added this year, XPeng completed a technical renovation of its Zhaoqing plant during the Chinese New Year holiday in February, according to the company.

Entering the second quarter, a number of XPeng's hot-selling models will see a full-scale boost. With a rich product matrix and a forward-looking layout of its sales, service and charging network, XPeng will accelerate to meet the expanding market demand, it said.

Last month, at a time when a large number of Chinese new energy vehicle (NEV) companies are increasing prices due to the continued rise in raw material prices, XPeng also increased the pre-subsidy prices of its models by RMB 10,100 to RMB 20,000 ($3,140) on March 21.

XPeng announced the price adjustment plan on March 18, allowing potential consumers to place orders at the pre-increase price over a two-day weekend.

On March 17, local news portal Sina reported that XPeng was ramping up its sales efforts to get more orders before the price increases.

In a conference call with analysts after announcing its fourth-quarter earnings on March 27, XPeng Chairman and CEO He Xiaopeng said that XPeng's goal is for the P7 to exceed 10,000 units sold in a single month this year.