The penetration rate of NEVs in wholesale sales in February was 21.8 percent, up 12.2 percentage points from 9.6 percent in February 2021. 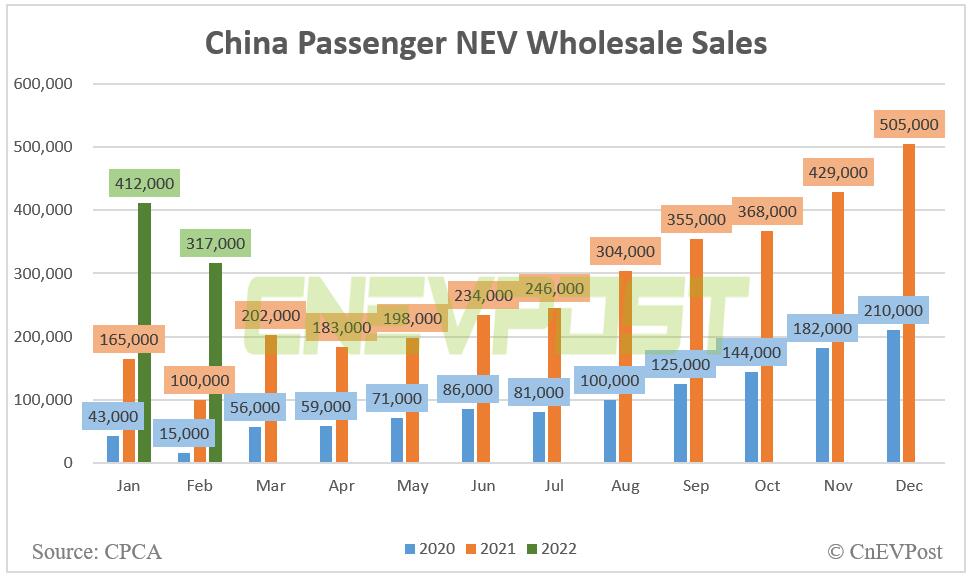 Wholesale sales of all passenger vehicles by automakers in China were 1.455 million units in February, up 26.9 percent from a year earlier and down 32.6 percent from January.

Retail sales of passenger vehicles in February were 1.246 million units, up 4.2 percent year-on-year and down 40 percent compared to January.

In the new energy vehicle (NEV) market, orders were weak in late January due to price increases, but picked up significantly in February, the CPCA said.

Although there was still outbreak of Covid-19 cases in China, the relatively mild prevention initiatives did not have a significant impact on residential travel and vehicle consumption, which boosted NEV sales, the CPCA said.

In wholesale sales in February, the penetration rate of NEVs was 21.8 percent, up 12.2 percentage points from 9.6 percent in February 2021.

In February, the penetration rate of NEVs among local brands was 38 percent and 29.4 percent for luxury vehicles, compared to only 3.3 percent for mainstream joint venture brands.

Volkswagen's joint ventures in China saw wholesale sales of 11,916 NEVs in February, accounting for a 58 percent share of mainstream joint venture brands, the CPCA said, adding that the German automaker's determined electrification transition strategy is beginning to pay off.

The penetration of NEVs in China was 21.8 percent of retail sales in February, up 13 percentage points from 8.1 percent in February 2021.

In February, the penetration rate of NEVs among local brands was 41.9 percent, luxury brands was 17.4 percent, and mainstream joint venture brands was only 3.5 percent.

There were five companies whose wholesale sales exceeded 10,000 units in February, two more than in the same month last year.

With the withdrawal of NEV purchase subsidies and rising raw material prices, price adjustments for some models led to a brief downturn in orders, the CPCA said.

After the Chinese New Year, consumers began to accept the new prices for NEVs, and many car companies have a backlog of undelivered orders, so March sales will not be significantly affected by the withdrawal, the CPCA said.