In 2018 and 2019, more than half of global new energy vehicle sales come from China. In 2020 with the impact of Covid-19, China's contribution declined. Now, with the rapid growth of the market, China has regained its share.

From January to April this year, world sales of new energy passenger cars were 1.39 million units, with China taking a 47 percent share, according to data recently released by Cui Dongshu, secretary-general of the China Passenger Car Association (CPCA).

In 2011, China's contribution to world sales of new energy passenger cars was only 8 percent, and that share rose to 55 percent in 2018, the data showed.

In 2019, the proportion slipped slightly to 51 percent. In 2020 under Covid-19, China's share of global new energy vehicle sales fell to 41 percent, while Europe's contribution soared to 44 percent from 26 percent in 2019.

In January-April, the US contribution to world new energy passenger vehicle sales was 12%, up 1 percentage point from 2020, but well below the 44% in 2011. 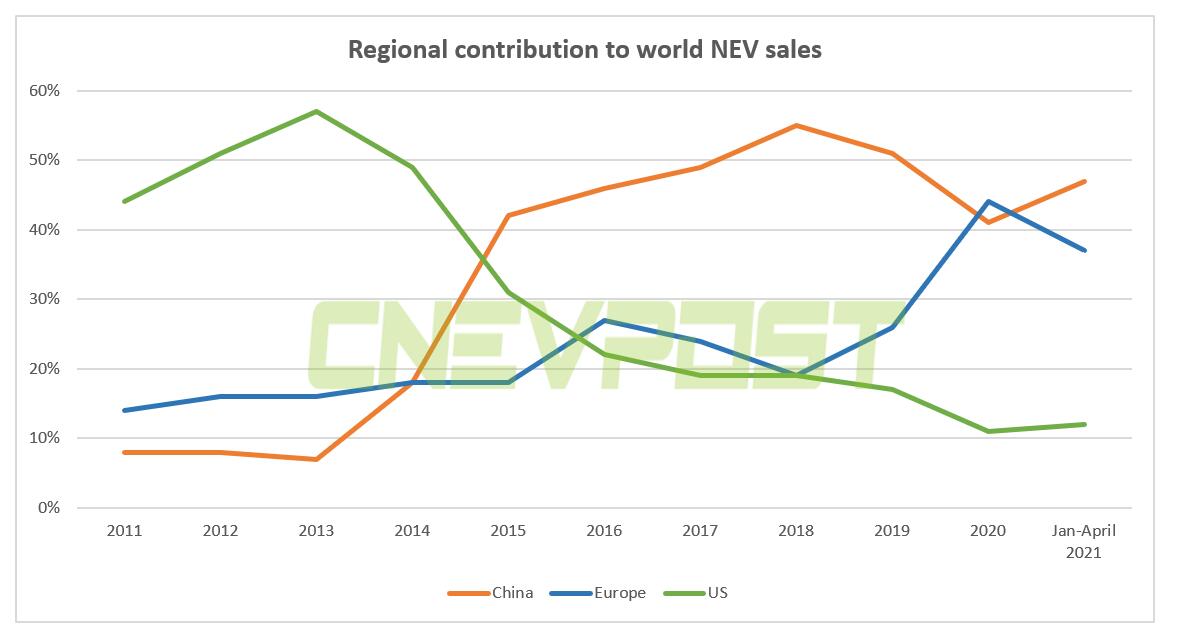 The data showed that China contributed 65 percent of the additional global sales of new energy vehicles in the first four months of the year. "This is mainly driven by the shift to market-based forces in China's new energy vehicle market, creating a stronger endogenous growth momentum," Cui said.

Retail sales of new energy passenger vehicles in China reached 185,000 units in May, up 177.2 percent from a year earlier and 17.4 percent from April, according to data released by the CPCA on Tuesday.

Wholesale sales of new energy vehicles in China reached 860,000 units from January to May this year, up 2.5 times year-on-year.

In February, the CPCA forecast that China's wholesale sales of new energy vehicles would reach 2 million units this year. In April, it raised that forecast to 2.2 million units.

On Tuesday, the CPCA raised its forecast for new energy passenger vehicle sales in China to 2.4 million units this year, saying it was the combined result of strength across all segments plus incremental exports, when it released May figures.