In a poster suspected to be for Volkswagen Power Day, the veteran car company seems to be trying to make Chinse electric vehicle maker Li Auto look awkward once again.

The poster shows Volkswagen, NIO, and XPeng Motors building charging infrastructure in China on their own or through joint ventures in 2021.

However, Li Auto's main method of replenishment shown on the poster is refueling, and its charging infrastructure target is "None". 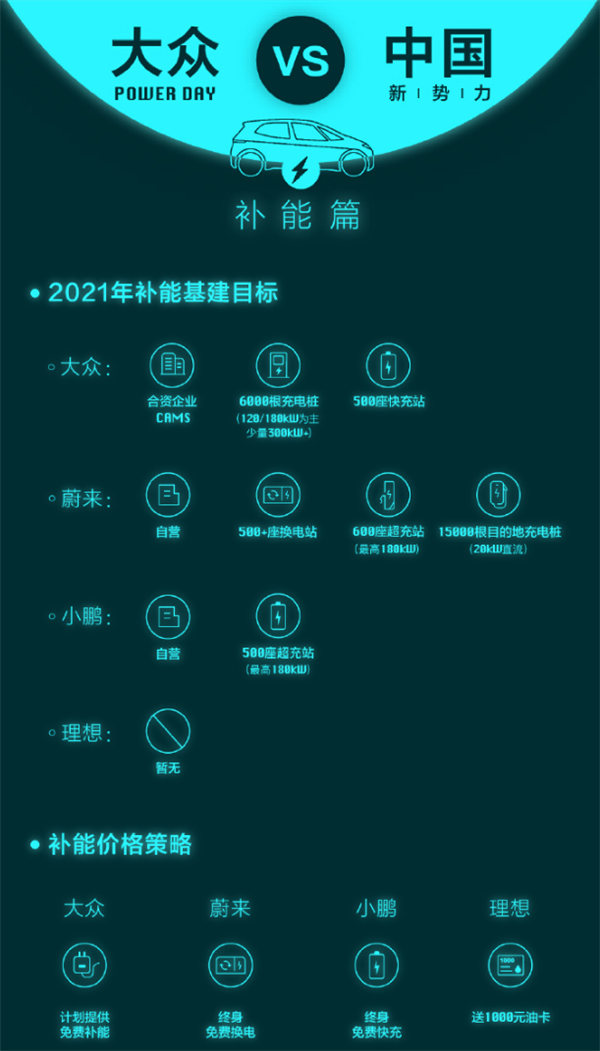 This seems to mock Li Auto for claiming to be an electric car company but actually running on fuel, and not doing anything to build a charging network.

Volkswagen Power Day was held on March 15, and the car company revealed its layout and goals in the battery market.

Volkswagen said it will invest in a large number of charging piles in the Chinese market to create "a charging experience like refueling" for customers.

If this poster is indeed from Volkswagen, then this is not the first time it has faced off with Li Auto.

In September last year, Stephan Wöllenstein, CEO of Volkswagen, said that using fuel to generate electricity is not environmentally friendly.

He didn't name Li Auto, but the only car Li Auto currently sells, the Li ONE, uses extended-range technology that uses fuel to generate electricity.

Soon after these remarks were reported, Li Xiang, founder, and CEO of Li Auto said in his personal Weibo that Li Auto is willing to test its energy efficiency and environmental protection capability against Volkswagen's most advanced PHEVs.

Li said he would be happy to conduct a comparison test with Volkswagen's most advanced PHEVs, preferably in Beijing, Shanghai, and Guangzhou, for three months.

He suggested inviting professional media in each region to simulate real-life scenes of use, as well as the daily use of Volkswagen's Chinese CEO, to see who is more energy-efficient and environmentally friendly in real life with the most realistic figures.