Home › BYD › BYD unveils model with its Super Hybrid technology, boasting range of up to 1,245 km

BYD unveils model with its Super Hybrid technology, boasting range of up to 1,245 km

Chinese automaker BYD unveiled on March 8 the Qin PLUS DM-i, a model equipped with its Super Hybrid technology with a range of up to 1,245 kilometers.

The car, BYD's first super-hybrid sedan, is equipped with the 1.5L high-efficiency engine for PHEV, capable of achieving a low fuel consumption performance of as low as 3.8L/100km and 0-100km/h acceleration time of just 7.3s, BYD said.

The engine, one of the core components of the DM-i Super Hybrid technology, has a thermal efficiency of 43 percent, making it the most thermally efficient mass-produced gasoline engine in the world, the company said.

The super-hybrid technology enables the Qin to deliver a powerful, smooth and quiet ride that can outperform conventional fuel cars, BYD said.

According to fuel consumption tests of the car by Chinese automotive media, in the most extreme power-deficit condition (25% SOC), the fuel consumption is about 3.5L per 100km on inner-city roads, while the 55km version consumes about 4.37L per 100km in highway conditions.

The model achieves both low fuel consumption and high power because the drive motor in the DM-i super hybrid system does the most work and acceleration, while the engine does the least and most fuel-efficient work.

In most hybrid modes, the engine drives a high-powered generator to power the drive motor.

In medium and high-speed driving conditions, the engine drives either the direct drive or the drive motor at the right time, which achieves power output together.

The car has LED headlights in arrow patterns and a streamlined body design.

In addition to Qin PLUS DM-i, BYD will also launch Song PLUS DM-i and Tang DM-i, two super-hybrid vehicles, which are expected to be launched in the middle of this month.

BYD brings its flagship SUV with blade battery to Norway 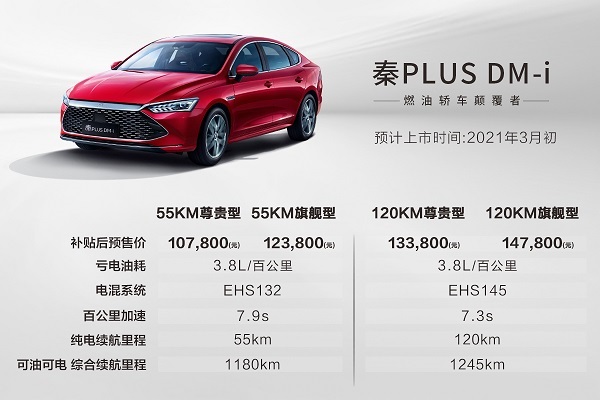