"We think a large part of the rally was caused by a short squeeze as investors were caught being too negative on the group given Covid and competition concerns," said Deutsche Bank analyst Edison Yu's team. 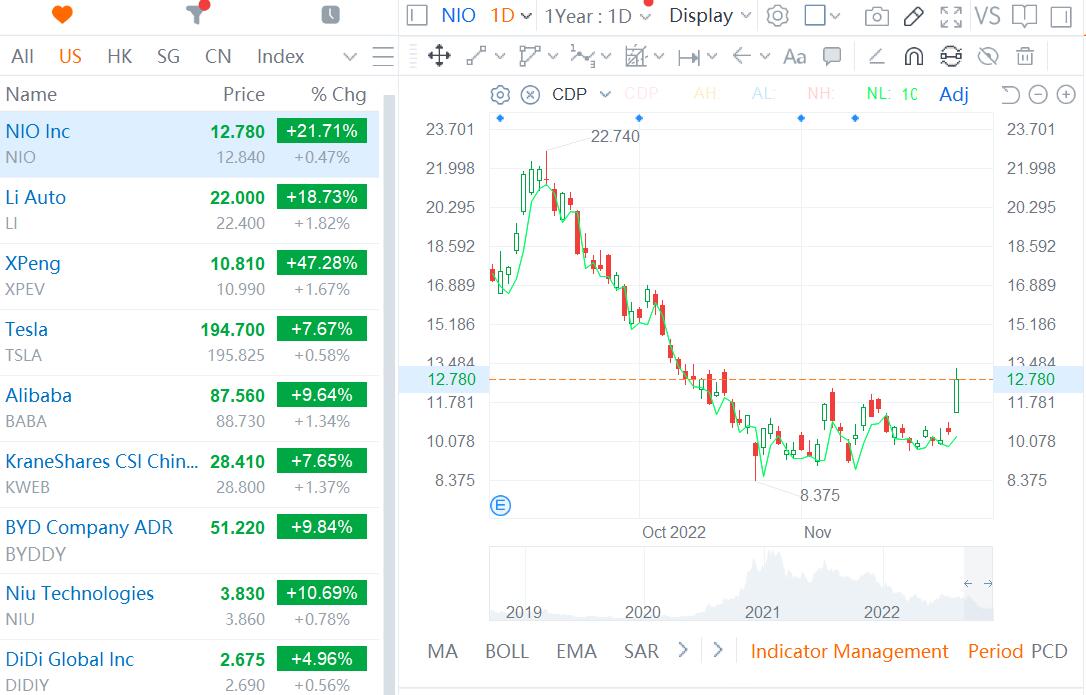 The trio of US-listed Chinese carmakers -- NIO, XPeng Motors and Li Auto -- all saw their shares rise sharply overnight, taking many by surprise.

"High level, we think a large part of the rally was caused by a short squeeze as investors were caught being too negative on the group given Covid and competition concerns," Deutsche Bank analyst Edison Yu's team said in a research note sent to investors on Wednesday.

Several factors may have contributed to the short squeeze, including a substantial easing of Covid controls in several Chinese cities and rumors that some auto stimulus policies that are set to expire are expected to continue.

Regarding Covid, policies are indeed shifting to a more hands-off approach, as illustrated by local government announcements in Guangzhou, Chongqing and Zhengzhou in recent days, Yu's team said in their note.

Despite the increasing number of cases, local officials have clearly emphasized reducing testing requirements and phasing out full-scale lockdowns, the team said, adding that existing policies have weakened consumer sentiment and fueled unrest this year.

In addition, similar to most Western countries, China will promote vaccination more broadly, especially among the elderly, the team noted.

"These new developments should be a positive for auto demand going forward as the COVID zero policies have forced many dealer outlets to close and delayed purchases, causing inventory in October to rise to the highest level since April," Yu's team said.

In addition to the positive developments on the Covid front, CnEVPost would like to note that there were rumors yesterday that some of China's support policies for the auto industry, which are set to expire at the end of the year, are expected to be renewed.

Since June, China has halved the purchase tax on mainstream internal combustion engine (ICE) vehicles from 10 percent to 5 percent in an effort to stimulate auto consumption. But the policy will end at the end of this month.

For the new energy vehicle (NEV) industry, current support policies include state purchase subsidies as well as purchase tax exemptions, of which the former will also expire at the end of this month, while the latter has been extended until the end of 2023.

There were rumors that the current policy of halving the purchase tax enjoyed by mainstream ICE vehicles is expected to continue in 2023, while the subsidies enjoyed by NEVs will not be completely withdrawn next year, but will continue to provide 50 percent of the previous amount, according to a report by Cailian on Wednesday.

In China, consumers pay for NEVs at a subsidized price, and car companies then receive the subsidy amount from the government. A continuation of that policy, even if significantly reduced in size, would be a positive support for the industry.

On top of these factors, some of the overwhelming concerns about increased competition in the NEV industry may be somewhat alleviated.

"While competition structurally continues to intensify in the EV market, we think the negativity on the three names in our coverage simply went too far," Yu's team wrote in their note.

XPeng reported a much better-than-expected third-quarter gross margin and guided November deliveries to a month-over-month increase to about 5,800 units further increasing to nearly 10,000 units at the midpoint of December, the team noted.

In addition, XPeng clearly has enough cash to get through next year without any additional financing, even under fairly challenging sales conditions, the team said.

With the addition of new products, both NIO and Li Auto are on track to achieve significant sequential monthly sales growth in November and December, according to the team.

"Looking at 2023, we do think there will be uncertainty on volume but in an improving macro environment where EV penetration pushes up (and maybe lithium carbonate prices come down in the back half), we find it difficult to have a super negative stance on the group.," Yu's team wrote.