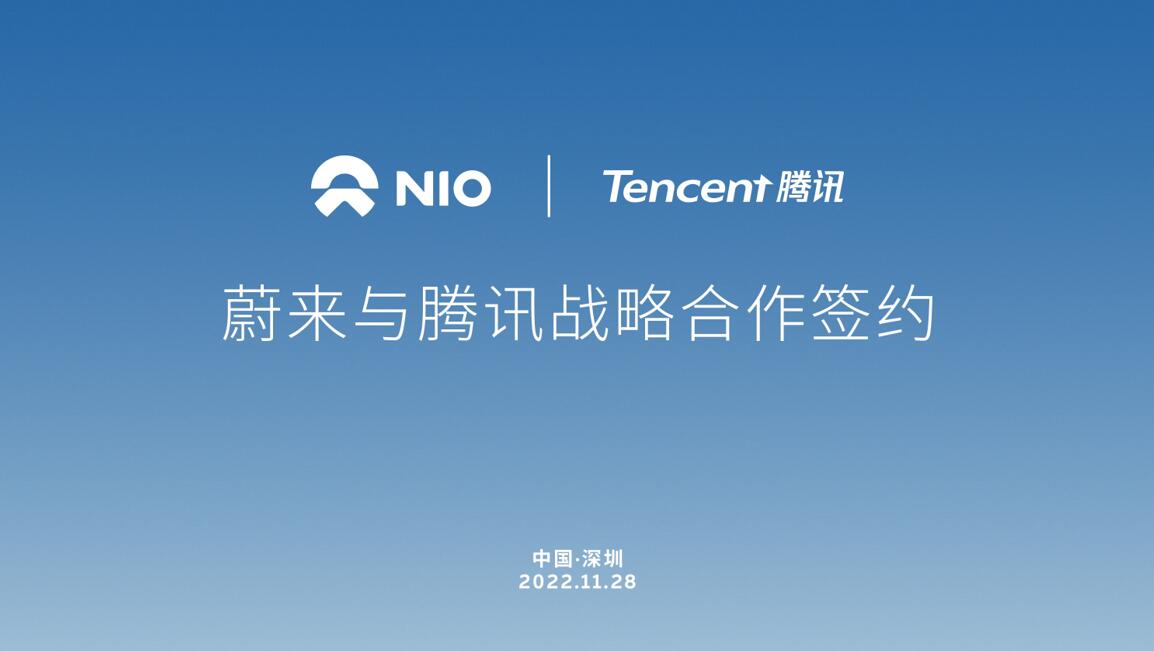 NIO has entered into a strategic partnership with Tencent, its largest institutional shareholder, to leverage the tech giant's resources to accelerate the development of autonomous driving technology.

The two companies signed a strategic cooperation agreement on November 28 in Shenzhen, Guangdong province, where Tencent is headquartered, according to the press release.

Notably, NIO opened a new NIO House in Dongguan, Guangdong on November 27, with a rare appearance by the company's founder, chairman and CEO William Li.

In addition to witnessing the opening of the NIO facility, Li's main purpose for coming to Guangdong was perhaps for the partnership with Tencent.

As background, Tencent is NIO's largest institutional shareholder, holding 9.8 percent of NIO shares, second only to the 9.9 percent of the company's founding team, according to the electric vehicle company's Hong Kong IPO prospectus in late February.

Tencent will provide a variety of computing engine support to help NIO further tap the value of data and accelerate autonomous driving R&D and applications, according to its press release.

Tencent Cloud can support NIO's EB-scale autonomous driving data storage with up to 100W QPS access efficiency at trillion file sizes, according to the press release.

The two parties are also exploring intelligent service networks based on location services and Internet ecology, such as next-generation power-up map navigation, which can intelligently plan replenishment plans for vehicle owners based on real-time range conditions.

Tencent is an important partner of NIO, and the two are deeply cooperating in core technologies including intelligent cockpit applications and autonomous driving, which will provide users with a product experience beyond expectations, said Li.

Notably, Li mentioned in an analyst call after NIO announced its first quarter earnings on June 9 that the high precision map NIO will use is based on an in-house research perspective built in cooperation with Tencent.

In the past two months, NIO has seen significant improvements in the capabilities of its assisted driving system, with multiples of improvements compared to the first-generation system, he said at the time.

NIO had planned to start pushing the NOP+ assisted driving software to owners by the third quarter at the latest, but that has yet to become a reality.

Li said during the opening ceremony of the new NIO House in Dongguan on November 27 that NOP+ should be released in the fourth quarter.

NIO will respect basic principles for the software's launch, including whether it has met delivery standards, and considerations for factors including safety and experience, he said Sunday.

Li said he drove an ET5 equipped with NOP+ from Shanghai to Hefei in November and the overall experience was OK.