GAC Aion closes Series A funding round, valued at over $14 billion

GAC Aion has brought in 53 strategic investors, paving the way for a possible IPO next year.

GAC Group has brought in dozens of strategic investors for its new energy vehicle (NEV) subsidiary, paving the way for further expansion and a possible IPO that may come next year.

GAC Aion has closed its Series A round of financing, bringing in 53 strategic investors, GAC Group said in an October 20 announcement.

GAC Aion received total financing of RMB 18.29 billion ($25.2), ceding 17.72 percent of its shares, according to the announcement.

Upon the completion of the financing, GAC Aion's registered capital increased from RMB 6.421 billion to RMB 7.803 billion, and GAC Group's combined direct and indirect ownership of GAC Aion changed from 93.45 percent to 76.89 percent, according to the announcement.

The 53 investors subscribed for the additionally registered capital of GAC Aion at a price of RMB 13.23 per share, for a total of 1.383 billion shares, the announcement said. 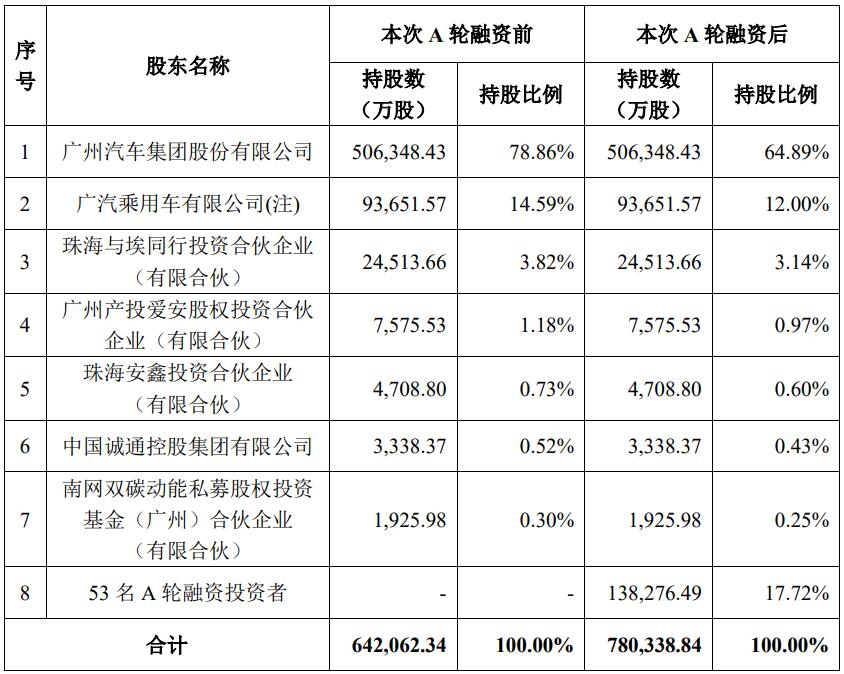 GAC Aion was established on July 28, 2017, and began independent operations on November 20, 2020, with the Aion LX Plus, Aion V Plus, Aion S Plus, Aion S, and Aion Y models currently on sale.

On September 15, GAC Aion unveiled its new premium brand Hyper and its first model, the Hyper SSR, at its headquarters in Guangzhou, becoming the latest car company to enter the electric supercar segment.

The company sold 30,016 vehicles in September, up 120.93 percent from a year earlier and up 11 percent from August, data it released earlier this month showed.

GAC Aion's second manufacturing center was completed and put into operation, and the overall planning capacity has exceeded 400,000 and can reach up to 600,000, GAC Aion announced on October 12.

GAC Aion will choose to be listed on China's A-share market or H-share once it completes its Series A financing, its general manager Gu Huinan had said in March this year.