NIO's battery swap station plant in Hungary will be operational in September, about two hours from CATL's planned battery production base in the country.

CATL, also known as Contemporary Amperex Technology Co Ltd, plans to build a battery base project in Debrecen, Hungary, with a total investment of no more than 7.34 billion euros, according to a stock exchange announcement today.

The company will build a power battery system production line in Hungary with an annual capacity of 100 GWh, according to the announcement.

With the rapid development of the new energy industry abroad, especially in Europe, the power battery market continues to grow, CATL said, adding that the move is to further deepen its global strategic layout, promote overseas business development and meet overseas market demand.

CATL's wholly-owned subsidiary, Contemporary Amperex Technology Hungary Projekt Menedzsment Korlátolt Felelősségű Társaság, will be the main implementer of the project, which was established in Budapest in February this year.

The total construction period for the project, which has a planned site area of about 2.21 million square meters, will take no more than 64 months, with the construction of the first building to begin this year after approval, CATL said.

Hungary has a long history of car manufacturing, and battery raw materials, diaphragms and other auxiliary materials can be sourced in the surrounding area, local media Cailian quoted CATL as saying.

The country is located in the heart of Europe and is home to many car companies, so building a local plant in Hungary will allow CATL to respond to customer demand in a timely manner, it said.

The plant will be CATL's second in Europe, in addition to its German plant, and will produce cells and modules for European automakers, the company said in an article posted on its WeChat account.

The plant's proximity to customers' vehicle assembly plants, including Mercedes-Benz, BMW, Stellantis and Volkswagen, will allow CATL to better respond to the needs of the European market, the post said.

In addition, CATL said it will also explore the possibility of establishing a battery materials plant with local partners to promote a recyclable and sustainable battery value chain.

On July 29, NIO announced that its NIO Power Europe Plant in Pest, Hungary, will be operational in September.

This is NIO's first overseas plant, covering about 10,000 square meters, and will serve as a production, service and R&D center for NIO's power products in Europe, according to a press release.

The plant's main operations include production and after-sales service of battery swap stations, training for European power operations, and research and development of power products.

As NIO begins to expand its presence in Europe, CATL's facility in Hungary potentially sets the stage for it to be supplied with batteries locally in the future.

NIO's battery swap station in Hungary is located about 220 kilometers from CATL's planned battery plant, about a two to three-hour drive.

A reader pointed out to CnEVPost that the NIO plant will be located in Bitorbágy, in the western part of Pest County. 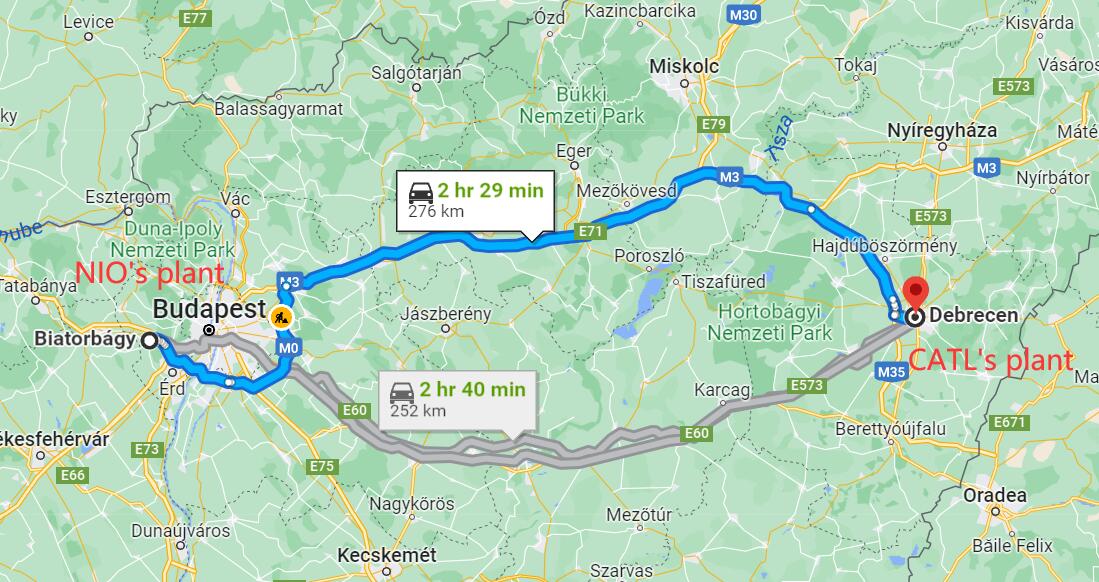 NIO entered Norway last year and will expand its products and integrated services to Germany, the Netherlands, Sweden and Denmark this year, according to its previously announced plans.

NIO appears to be loading the first ET7 sedans for delivery to European consumers, as the planned four-quarter delivery gets closer, according to a report by CnEVPost earlier today.