NIO wanted to make sure it could provide a good experience for its users before deciding to enter a new overseas market, but some users may not be able to wait any longer. 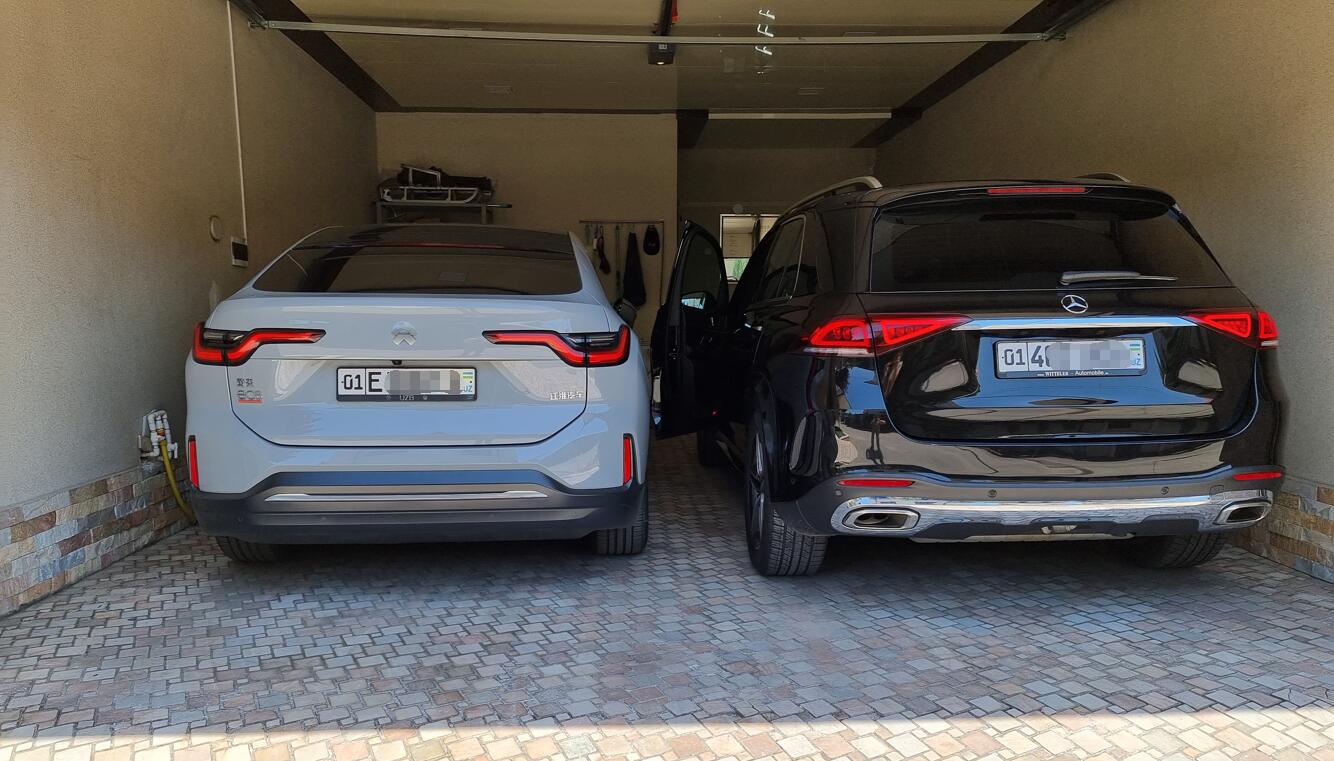 NIO (NYSE: NIO, HKG: 9866, SGX: NIO) aims to serve users in more than 25 countries and regions around the world by 2025, but as its reputation grows overseas, there are pressures that are potentially pushing it to accelerate that process.

While we focused on the company's performance in the Chinese market as well as in Norway, we never realized that there were regular NIO owners outside of those two countries until today.

And their car-using experience is one of the pressures that NIO needs to accelerate its overseas expansion.

An NIO EC6 owner from Uzbekistan named Bakhtiyor Achilov recently shared his and his friends' experiences with CnEVPost, giving us a glimpse of how a group of NIO owners under the radar feels about NIO cars.

Achilov, 50, works in Uzbekistan's capital city of Tashkent importing and selling natural furniture veneer used in the production of furniture and doors, as well as a variety of goods from Germany and Turkey.

In the summer of 2021, he considered buying a new car for his wife because her Lexus NX was too small.

Achilov told CnEVPost that he read a lot about the Chinese electric vehicle makers and what we had posted.

They wanted a car that was not inferior in terms of technical data, quality of finishing materials, acceleration, power reserve on a single charge, but also stood out from the crowd and had an individual look.

But in the territory of Uzbekistan, there is not a single manufacturer of electric vehicles, nor a local dealer.

Therefore, they had little choice but to go with their intuition and feedback from Chinese owners. Thus, their choice fell on the rapidly growing NIO.

Their decision to buy an NIO car was also inspired by the lifetime warranty it offered in China, believing that a lower quality product would not come with such a promise.

On August 31, 2021, Achilov placed an order for an NIO EC6 Performance car through a company called Aeco Holding Limited. The company purchased the car for him and organized its shipment to Uzbekistan.

In December 2021, Achilov received the NIO EC6, a brand new car with 0 miles, four months after he placed the order.

And in December 2021, even before receiving the NIO EC6, Achilov said he saw the news about the ET7 on CnEVPost.

As background, NIO unveiled the ET7, its first sedan, at the NIO Day 2020 event on January 9, 2021, with deliveries starting at the end of March.

Achilov told us that he really liked the car, especially since he was also considering replacing his Mercedes GLE with an electric vehicle at that time.

He also ordered an ET7 through his friends in China and made an advance payment for the car in December 2021.

Production of Achilov's ET7 is now complete and is stored in an Aeco Holding Limited warehouse in China.

After receiving the NIO EC6, Achilov's family was happy with the vehicle, saying they didn't make the wrong choice.

"When we drive in the city, all the drivers look at me with admiration, turn around to see the car," Achilov told CnEVPost.

Outside of the experience the vehicle brings, however, software issues began to bother Achilov, particularly the screen's Chinese interface.

Achilov said he could use the car with a Chinese interface, but only through a translator.

"You have to change the car settings using a dictionary or an online translator, which is not very convenient," he told CnEVPost, adding, "I am 50 years old, and it is difficult for me to learn foreign languages at my age."

When he bought the car, dealer Aeco told him that the car's interface would soon be updated, and that this update would include English.

As a background, NIO pushed NIO OS Aspen 3.1.0 for vehicles in China in January this year, and the update included an English user interface for the car's system.

In addition, all functions in NIO's mobile app are not available to him, and he can only receive news and contact technical support.

Achilov told CnEVPost that there are currently more than 20 NIO owners in Uzbekistan who took the risk of buying an NIO car knowing that technical support would not be available locally before they purchased it.

By using these cars, they produce free advertising for NIO, but the fact that they can't update the operating system outside of China and Norway makes them feel unfair, according to Achilov.

Achilov said that after being unable to update to new software with an English interface, he told his Chinese friends who helped him buy the car, and they in turn contacted the dealership.

At the time, they themselves had no idea how the car would behave outside of China, and apparently no one had asked them a similar question, Achilov said.

NIO's mobile app has an alert for a new software version, but when trying to update the vehicle, the system fails, Achilov said. 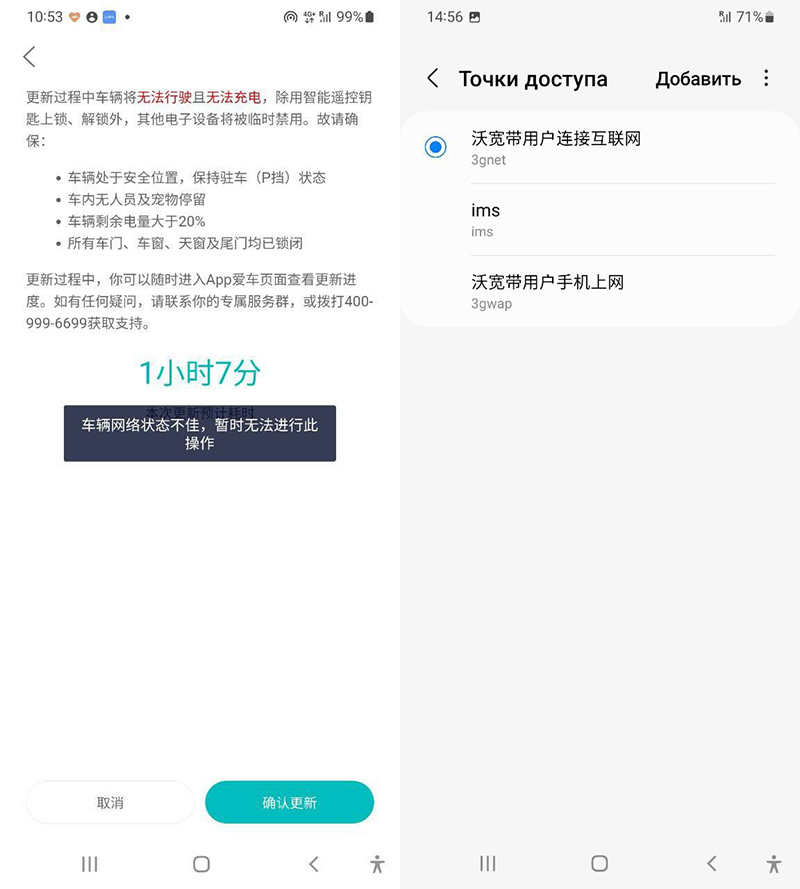 Achilov said he and other local NIO owners tried to get help from NIO several times, but the problem was never resolved.

Achilov and his friends also wanted NIO to send technicians to help owners in Uzbekistan upgrade their systems, but also did not receive a positive answer.

"They also told me that I should not have bought a car if there was no technical service on site in Uzbekistan," he said.

"Tesla, XPeng, Volkswagen ID.4, ID.6, Hyundai and they also do not have a technical service, all car enthusiasts take them at their own peril and risk based, like me, on the enthusiasm, intuition and feedback of Chinese car enthusiasts," he added.

Achilov said his ET7 is also currently waiting for a software update that supports English.

"We agreed with friends that as soon as they update the system to a new firmware version, they will send the car to Uzbekistan by a similar method, by car transporter to Khorgos and then through the Republic of Kazakhstan the car will arrive in Tashkent," he said.

Achilov's experience underscores the fact that NIO's expansion in the global market has lagged behind the expectations of many of its supporters who are willing to shell out money for its vehicles.

That lag, and the high expectations of some users, could potentially cause some supporters to change their stance if the ensuing problems aren't properly addressed.

But, like leading electric vehicle companies including Tesla and BYD, NIO still faces a lack of capacity, so it is focusing on delivering vehicles to customers in China.

NIO announced its official entry into Norway on May 6 last year, the company's first stop overseas. The company's first NIO House in Norway opened on October 1 last year, with the first model offered being the ES8 SUV. Its flagship sedan, the ET7, is expected to be available in the country within this year.

According to NIO's already announced plans, the company will enter Germany, the Netherlands, Sweden and Denmark in 2022, and will serve customers in more than 25 countries and regions worldwide by 2025.

It is worth noting that the way NIO expands in overseas markets does not rely on dealer networks like many other traditional car companies, it instead wants to bring its own set of service systems to the countries covered by its network.

This will also affect the speed of its expansion to some extent, as it will take time to build NIO Houses, battery swap stations, supercharging stations and provide other services it has available in China.

This is a result of NIO's positioning to target the high-end market. In a December 19 interview with English-language media, including CnEVPost, William Li, NIO's founder, chairman and CEO, revealed his thoughts on the company's expansion in the global market:

We can't let users not get good service for a long time, and we will care whether we have the ability to provide users with a convenient experience like using a fuel car.

However, the reality is that there are already overseas users like Achilov who are not happy to see NIO wait a while longer before entering their market, and the number will definitely increase.

Do you want NIO to enter your region as soon as possible? If so, please reply in the comment section with your region.