Morgan Stanley sees NIO shares rising in the next 15 days, and Daiwa advises investors to accumulate NIO shares on any weakness.

As background, a short-seller called Grizzly Research said in a report released Tuesday that they believe NIO likely used an unconsolidated affiliate, Wuhan Weineng (or Mirattery), to inflate revenue and profitability.

One of the key points of the allegation is that Grizzly believes NIO inflated 21,053 batteries compared to the 19,000 battery assets Weineng mentioned in its ABS offering in September 2021. 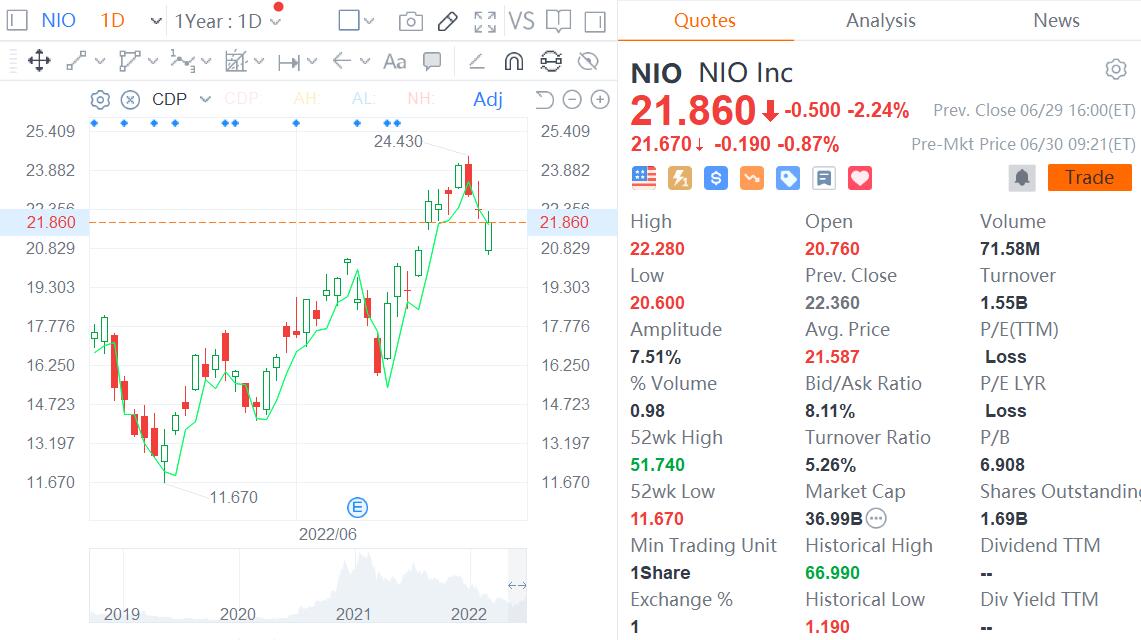 Here are some Wall Street analysts' comments on the matter that we have obtained.

Morgan Stanley: NIO to rise in next 15 days

In a research note sent to investors on Wednesday, Morgan Stanley analyst Tim Hsiao's team presented a "tactical idea" that NIO's shares are about to rise after the recent falls.

The team said that while "sluggish industry sentiment" has led to a sell-off, NIO's upcoming June sales figures and second-half sales outlook are expected to send the stock rebounding, without even directly mentioning Grizzly Research's short-selling.

"While sluggish industry sentiment resulted in the sell-off, we believe NIO’s upbeat June sales together with good volume trajectory into 2H, aided by a strong product pipeline, will revive investor confidence in the company’s operations and trigger a rebound in the stock," the team said.

Hsiao's team expects the likelihood of such a scenario to be 70-80 percent, or "very likely."

The team reiterated its Overweight rating on NIO, along with a $31 price target.

NIO shares closed at $21.86 on Wednesday in the US and the price target implies a 42 percent upside.

In a research note sent to investors on Wednesday, JPMorgan analyst Nick Lai's team said NIO's decline in the US may be due to multiple allegations in the short-selling report, but they remain bullish on the company.

The team said they see NIO as a manufacturer whose revenue and profitability is based on the production and distribution of the cars it sells, plus the potential future monetization of its software business. But they do distinguish between the business models.

Weineng could continue to issue more ABS in the future to expand its portfolio with remaining batteries or future batteries as underlying assets, the team noted.

"This disclosure also indicates that every battery held by Wuhan Weineng has a corresponding underlying subscriber," the team wrote.

Following the company's recent 1Q22 result call and comment on the 2Q22 outlook, we believe the company's vehicle margin will hit a trough of ~15.5 percent in 2Q22 but rebound strongly to ~18-19 percent in 2H22.

With ET7 deliveries already underway and ET5 and ES7 deliveries coming up later this year, all of these should drive NIO's sales growth to 70 percent in 2022, the team said.

In the long run, Lai's team sees content and software monetization becoming an increasingly large part of revenue, which in itself could drive changes in the automotive industry's business model.

The team maintains an Overweight rating on NIO and a $30 price target, implying 37 percent upside.

In a research note sent to investors Thursday, Deutsche Bank analyst Edison Yu's team said that in their view, some of the numbers being circulated are inaccurate and elements of NIO's business model have been very misconstrued.

"We do not see this detracting from the product super cycle NIO is embarking on and expect these concerns to fade fairly quickly," Yu's team said.

The team reiterated a Buy rating on NIO and a $45 price target, implying a 106 percent upside.

Daiwa analyst Kelvin Lau's team wrote "Research report by short-seller Grizzly likely not accurate" in the headline of a research report sent to investors on Wednesday.

Lau's team believes Grizzly's report does not accurately reflect the details of the deal and recommends investors accumulate NIO stock on any share price weakness.

The team reiterated its Buy rating on NIO, without mentioning a price target.