Sunwoda EVB is seeking a new round of financing estimated at more than RMB 3 billion ($448 million), valuing it at RMB 20 billion, according to local media.

Sunwoda, a Chinese battery maker that has risen rapidly in the past year or two, is reportedly spinning off its electric vehicle (EV) battery business for faster growth.

Sunwoda launched plans to spin off its power battery business in late 2021, with its subsidiary Sunwoda Electric Vehicle Battery Co Ltd (Sunwoda EVB) to be listed as a separate entity, local tech media 36kr reported today, citing people familiar with the matter, adding that the IPO application is expected to be filed in 2023-2024.

Sunwoda EVB is seeking a new round of financing expected to exceed RMB 3 billion ($448 million), valuing the company at RMB 20 billion, the report said, citing another investor.

Sunwoda EVB was valued at RMB 12.4 billion after its last round of financing, and if the current round goes through, the valuation will rise by 61 percent, the report noted.

Sunwoda's main business is consumer batteries, but its power battery business has been growing rapidly in recent years.

In May, Sunwoda's power battery installed base in China was 0.54 GWh, ranking fifth with a 2.88 percent market share, according to data released earlier this month by the China Automotive Battery Innovation Alliance. 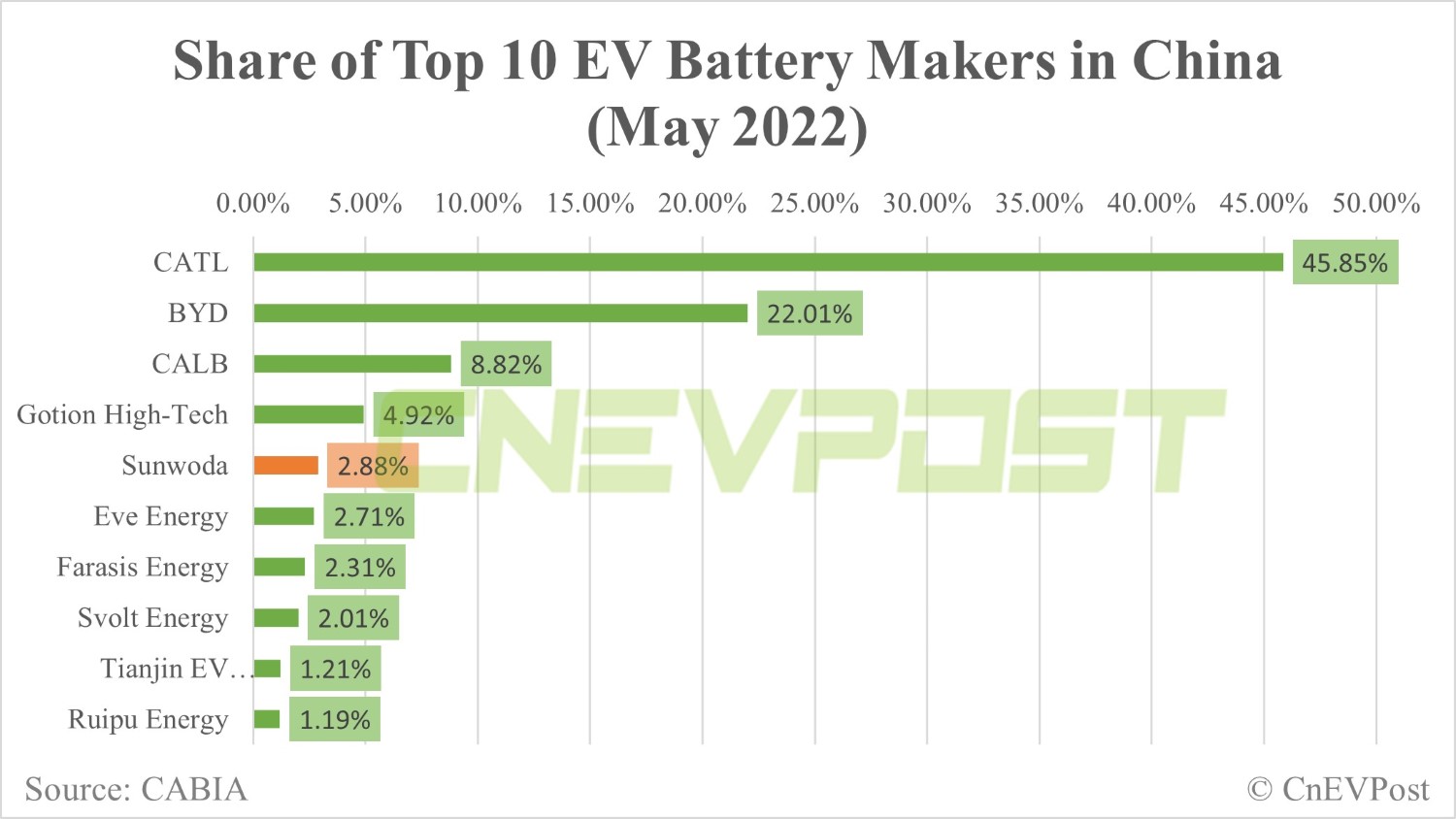 At the end of February this year, Sunwoda announced plans for a capital increase in Sunwoda EVB, with the Chinese EV trio -- NIO, XPeng Motors, and Li Auto -- all planning to take a stake.

A total of 19 companies plan to increase their capital to Sunwoda EVB by RMB 2.43 billion, which will give them a 19.5495 percent stake in the company after the capital increase is completed, Sunwoda said in an announcement on February 24.

Li Auto's affiliate Jiangsu CHJ Automobile Co Ltd, Sky Top LLC and their designees will all invest RMB400 million and are the two largest capital increase holders, each receiving a 3.2 percent stake. Sky Top is an entity affiliated with XPeng.

Sunwoda doesn't have the ability to compete with companies including Contemporary Amperex Technology Co Ltd (CATL, SHE: 300750), LG Energy Solution and BYD for the top spot in the industry right now, but becoming a leading second supplier is possible, the 36kr report quoted one investor as saying.