China's NEV sales up 49.6% in May from April, CAAM data show

China's auto industry as a whole still reported lower sales in May compared to a year ago, despite an improvement from April. 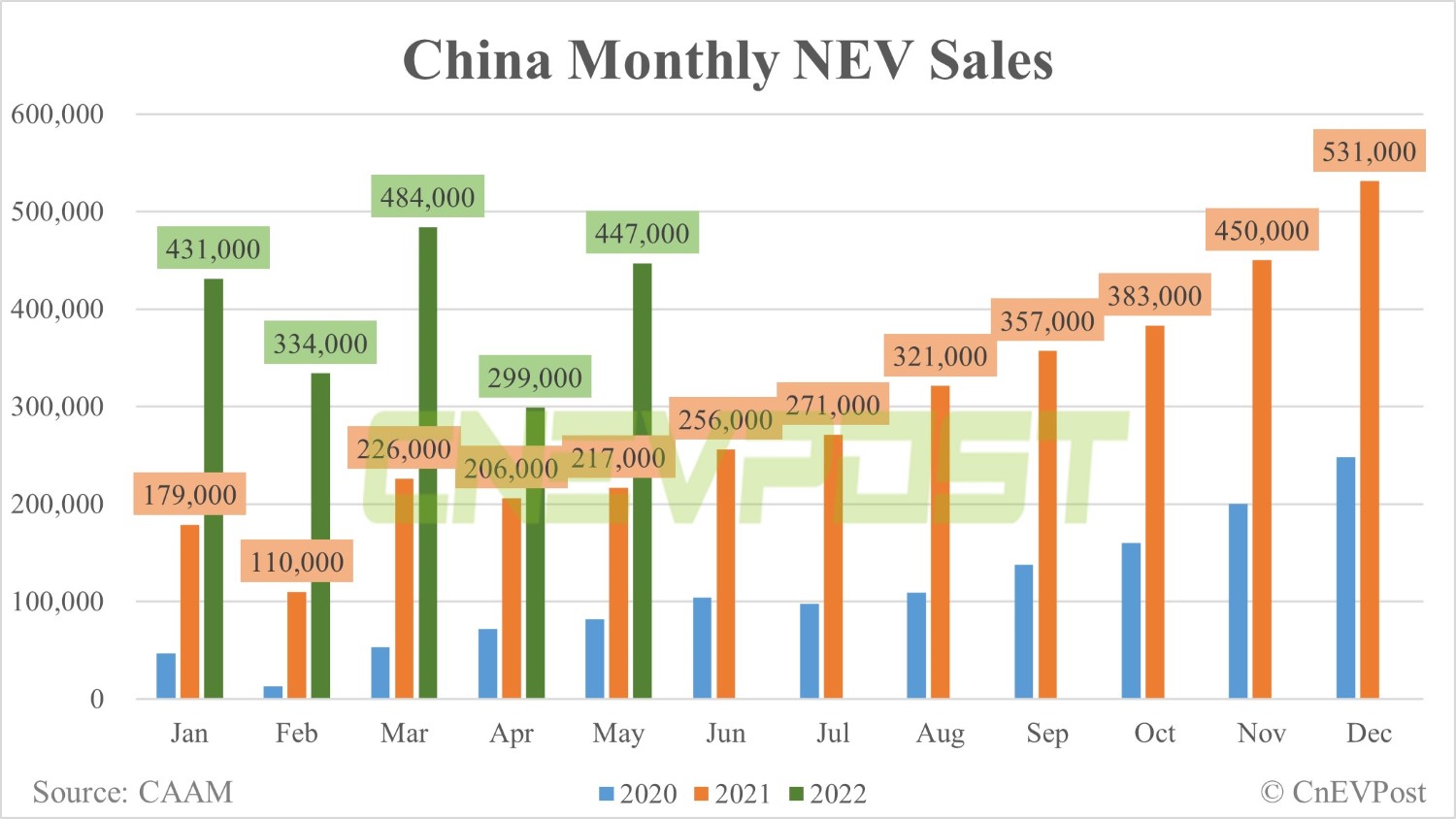 China's new energy vehicle (NEV) sales rebounded sharply in May after sales plunged in April due to the Covid outbreak in several cities.

NEV sales in May were 447,000 units, up 105.2 percent year-on-year and 49.6 percent from April, according to data released today by the China Association of Automobile Manufacturers (CAAM).

In contrast to the rapid growth of NEVs, the Chinese auto industry as a whole still saw lower sales in May compared to the same month last year, despite the improvement from April.

In the January-May period, China's auto sales were 9.555 million units, down 12.2 percent from the same period last year.

As a pillar of China's economy, the auto industry has strong development resilience and vitality, and with the joint efforts of all parties, the industry is expected to return to normal operation soon to, the CAAM said.

Going into June, the situation of China's auto production and sales will continue to improve as policies, including the halving of purchase taxes, begin to be implemented, the CAAM said.

On May 31, China's Ministry of Finance and the General Administration of Taxation announced a 50 percent reduction in vehicle purchase tax for passenger vehicles with a displacement of 2.0 liters or less that cost no more than 300,000 yuan ($45,060) between June 1 and December 31.

Prior to this, China's purchase tax rate for internal combustion engine (ICE) vehicles was 10 percent, while the purchase of NEVs was exempt from purchase tax.

Phate Zhang/CnEVPost
Phate is the founder and main author of CnEVPost. He has been reporting since 2009, mainly on macroeconomics and capital markets. Contact via: [email protected]
Popular Posts
Further Reading: This retail investor explains why he believes NIO is better bet in China's EV trio
2022-08-06 21:02:17
Niu Technologies to launch e-bikes with sodium-ion batteries in 2023 as lithium battery prices rise
2022-08-07 12:07:39
BYD exec to donate about $24 million worth of stock to charity foundation
2022-08-07 17:10:09
BYD to build new commercial vehicle and parts production base in China
2022-08-07 12:48:43
Baidu expands self-driving ride-hailing service without safety officers to more cities
2022-08-08 11:25:34
Recent Posts