A subsidiary of CATL has acquired the exploration rights to the lithium mine, which is expected to hold 2.66 million tons of lithium metal oxide, for RMB 865 million.

In the age of electric vehicles, locking in the supply of upstream raw materials is critical for battery makers, and Contemporary Amperex Technology Co Ltd (CATL, SHE: 300750) has just made significant progress in this regard.

On April 20, CATL's subsidiary Yichun Shidai New Energy Resources Co Ltd successfully won a bid for exploration rights to a lithium mine in Yichun, Jiangxi province in east China for RMB 865 million ($135 million), according to an announcement made today.

The mine is located about 40 kilometers from bearing 21° in Yifeng county, Yichun city, with an exploration area of 6.44 square kilometers, according to the announcement.

The inferred porcelainite ore resource is 960 million tons with 2.66 million tons of associated lithium metal oxide, according to CATL.

Last September, CATL signed a cooperation agreement with the Yichun Municipal Government to build a new lithium battery production and manufacturing base project, and plans to lay out the upstream and downstream areas of this industry chain.

CATL will accelerate the exploration and development of lithium resources and increase lithium resource supply in line with the national strategic mineral security guarantee, it said.

As a battery supplier to Tesla and NIO, CATL's power battery installation in China in March was 10.81 GWh, accounting for a 50.49 percent market share, according to data released by the China Automotive Battery Innovation Alliance (CABIA) on April 11.

However, as raw material prices, including lithium carbonate, have risen sharply over the past year, investors have become concerned about CATL's profitability.

After the Chinese stock market closed on April 19, rumors surfaced that CATL's earnings in the first quarter were expected to be below RMB 5 billion, according to a report yesterday by the Shanghai Securities News. CATL is expected to disclose its first-quarter earnings on April 28.

The report, citing unnamed analysts, said that if the rumors are true, CATL's first-quarter earnings would be lower than the previous general market expectation of around RMB 5 billion.

Perhaps as a result of the rumors, CATL, which trades in Shenzhen, plunged on Wednesday. By the close of trading, CATL fell 7.55 percent to RMB 407, a new low since June 2021. That sent the company's total market capitalization below 1 trillion yuan to RMB 948.7 billion.

It is worth noting that the sharp rise in raw material prices has become a drag on the growth of the new energy vehicle (NEV) industry. China's industry regulators have said they will increase efforts to address the problem.

China's Ministry of Industry and Information Technology (MIIT) will speed up the development of domestic resources, work with relevant departments to resolutely crack down on hoarding, price gouging and other unfair competition, and push raw material prices to return to rationality as soon as possible, the MIIT spokesman Luo Junjie said at a conference on Tuesday. 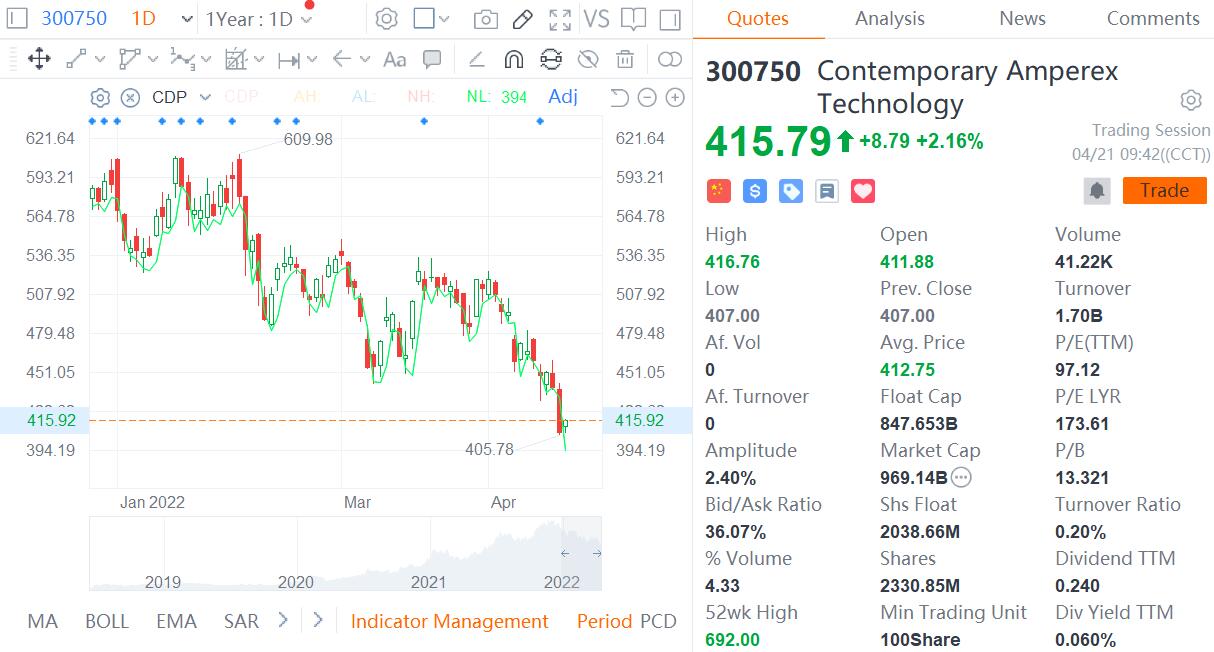