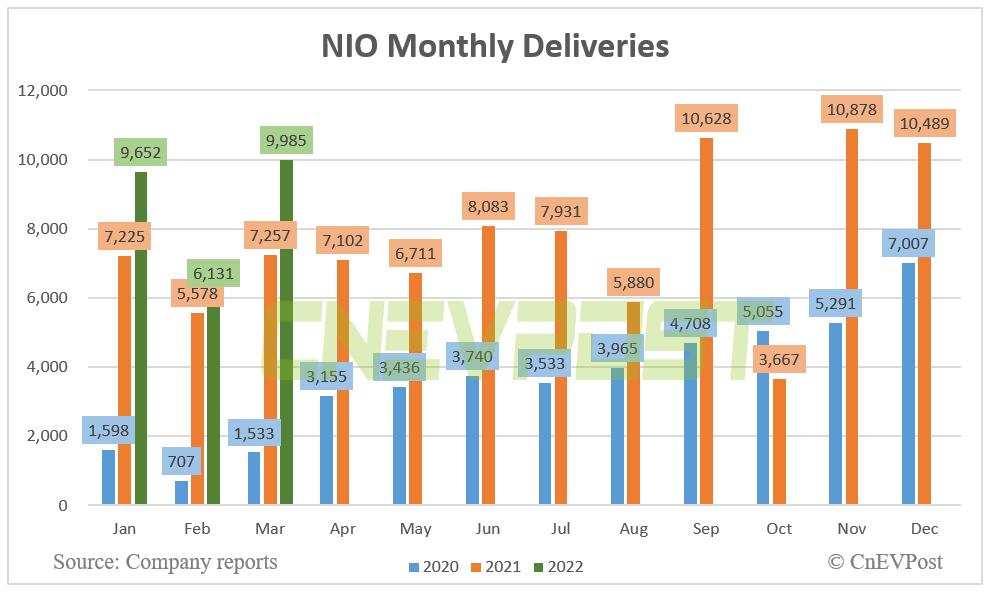 NIO's flagship sedan, the ET7, had 163 deliveries in March, with the first delivery of the model taking place on March 28.

In the first quarter, NIO delivered 25,768 units, a quarterly high and a 28.5 percent year-on-year increase.

NIO delivered the ET7 to the first owners on March 28 in Hefei, Anhui province, where the JAC-NIO factory is located, and began sending the flagship sedan to more cities.

NIO did not announce the number of ET7 deliveries at that time. William Li, the company's founder, chairman and CEO, said that because of the impact of Covid and the fact that it takes some time for the ET7 production capacity to climb, the deliveries will not be high in the near future.

Since March 5, when test drives were allowed, users in more than 80 cities in China have experienced the ET7 up close and the conversion rate of test drive orders has exceeded expectations, NIO said at the time of the first ET7 delivery.

In the past month, several Chinese cities have gone into lockdown because of the latest outbreak of the Covid pandemic.

Shanghai, where NIO's global headquarters is located, entered a phased lockdown starting March 28, and prior to that, many residential areas had been cordoned off due to the presence of Covid cases.

In addition, it is worth noting that NIO is one of the very few new energy vehicle (NEV) companies that have not raised their prices due to the reduction in subsidies and the continued increase in raw material prices.

In a conference call after announcing its earnings on March 25, Beijing time, NIO hinted that a facelift of its existing models was coming, and that it would then consider its product pricing strategy based on the price of raw materials.

Local media Cailian subsequently reported that NIO expects to release the 2022 model in late May, which will feature major upgrades to its smart hardware, and that prices for the upgraded models and batteries are expected to increase.

On March 30, NIO co-founder and president Qin Lihong responded to a question from a user on the NIO app, saying that NIO's new SUV ES7 would be released by the end of May.