This was down 18.5 percent from December, which the CPCA said was consistent with the characteristics of the same month last year. 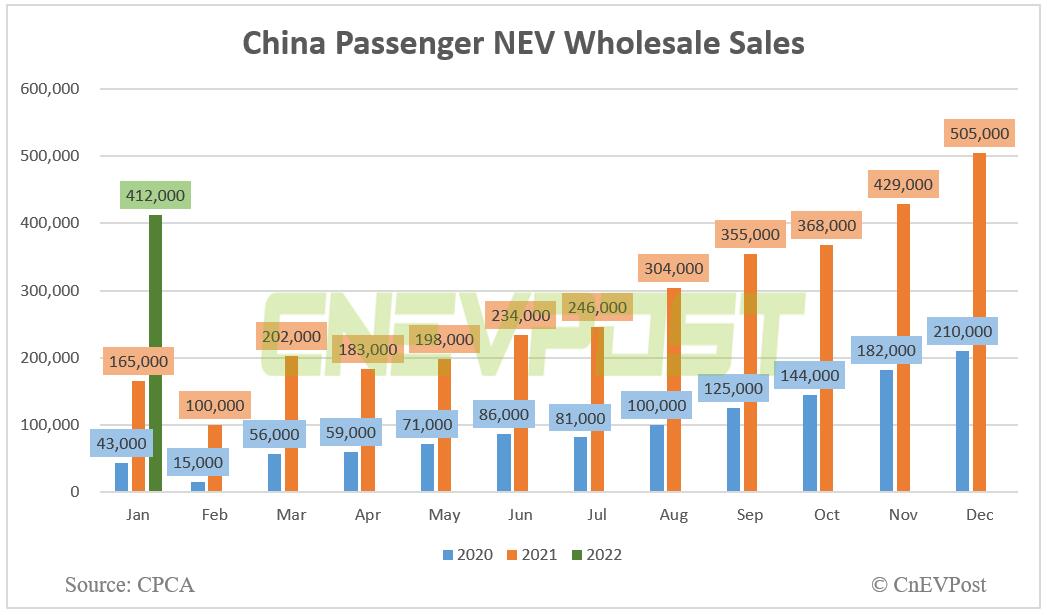 China's wholesale sales of new energy passenger vehicles were 412,000 units in January, up 141.4 percent year-on-year and down 18.5 percent from December, the China Passenger Car Association (CPCA) said in a report released today.

The January sales decline relative to December is consistent with the January 2021 characteristics, the CPCA said.

Late last year, the Chinese new energy vehicle (NEV) market saw a rush of deliveries, leaving the first 10 days of January with a weak sales performance, the CPCA said, adding that the market showed a significant pickup in the second and third weeks of January.

Wholesale sales of all passenger vehicles in China were 2.172 million units in January, up 6.8 percent year-on-year and down 8.2 percent from December.

Retail sales of passenger vehicles in January were 2.092 million units, down 4.4 percent year-on-year and down 0.6 percent compared to December.

Overall, while China is still seeing the emergence of Covid-19 cases, the relatively mild prevention and control initiatives have not had a significant impact on residential travel and vehicle purchase spending, the CPCA said.

Among wholesale sales in January, the penetration of NEVs was 19 percent, up 10.6 percentage points from 8.4 percent in January 2021, but down from 21.3 percent in December.

In January, NEV penetration among local brands was 32 percent and 22.9 percent for luxury brands, compared to just 2.7 percent for mainstream joint venture brands.

In January, the penetration rate of NEVs among local brands was 31.4 percent, compared to 10.2 percent for luxury vehicles and only 2.5 percent for mainstream joint venture brands.

NEVs exported from China in January were 52,000 units, well above the less than 8,000 units exported last December.

There were 11 car companies whose wholesale sales exceeded 10,000 units in January, 6 more than the same month last year.