This is the third consecutive month that the Volkswagen ID. family of electric vehicles has delivered more than 10,000 units in China. 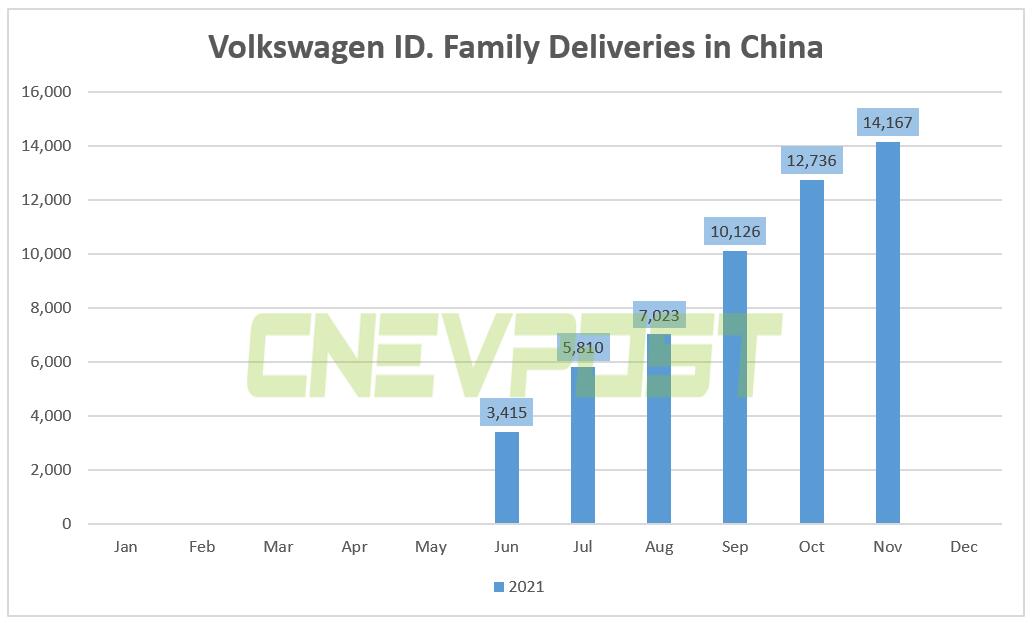 Volkswagen's ID. family of electric vehicles (EVs) sold 14,167 units in China in November, up 11 percent from 12,736 units in October, according to data shared today by the German auto giant.

This is the third consecutive month that the ID. family of EVs has delivered more than 10,000 units in China, a new high for the automaker since it began publishing the data in June.

Volkswagen does not release a breakdown of ID. family sales in China for individual models.

The company launched the ID.3 in China on October 22, making it the company's third ID. lineup to be offered in China after the ID.4 and ID.6.

The ID.3 is a compact two-seater with a lower starting price than the ID.4 and ID.6. The ID.3 is only produced by SAIC Volkswagen in China.

Last week, a month after the ID.3 was officially launched in China, SAIC-Volkswagen offered a battery leasing program for consumers of the model, bringing the purchase threshold down by tens of thousands of yuan.

One consumer said he purchased a version of the ID.3 priced at RMB 173,888 for just around RMB 110,000, but that didn't include the battery, according to a November 23 report by yiche.com.

After visiting the ID. Store in Shanghai, yiche.com's reporter found that the battery leasing program offered by VW is actually an interest-free loan for a fixed amount.

The amount of the loan is RMB 60,000 and the interest-free period is 60 months, which means the consumer needs to pay back RMB 1,000 every month.