Home Industry BMW delivered 32,000 NEVs in China in Jan-Sept, half of NIO

In the past four months alone, NIO's deliveries reached 32,522 vehicles, comparable to BMW's NEV sales in the first nine months.

BMW did not release figures for the single month of September. Notably, local Chinese EV brand NIO, which also targets the high-end market, delivered 66,395 vehicles in the first nine months, more than twice as many as BMW's NEV sales in China in the same period.

In the past four months alone, NIO's deliveries reached 32,522 vehicles, comparable to BMW's NEV sales in the first nine months. 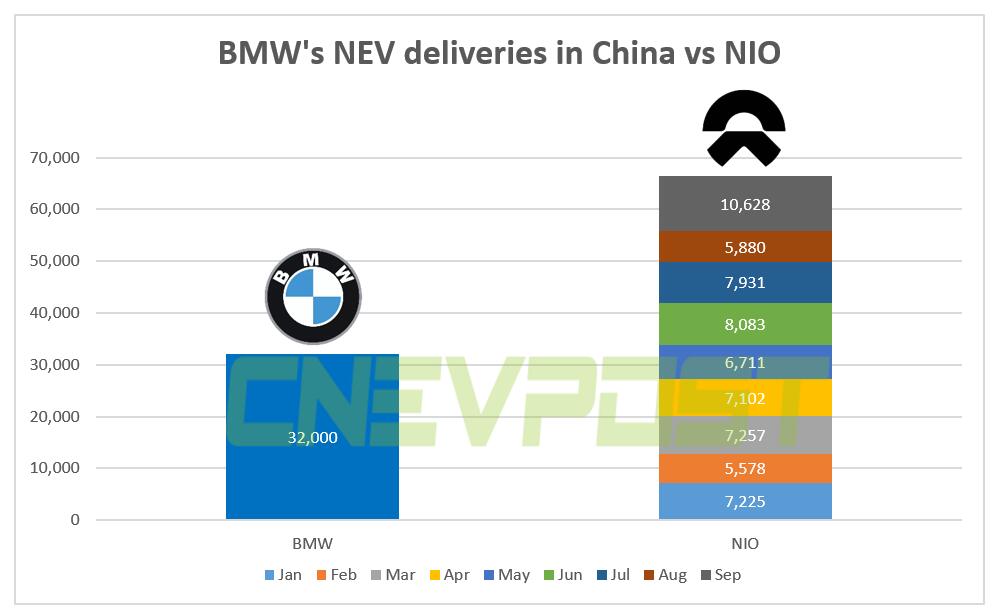 BMW iX3 deliveries in the third quarter were up 26.9 percent from the second quarter, the company said, without disclosing specific figures. But BMW said BMW iX3 sales in the first nine months totaled more than 12,000 units.

BMW said Monday that the company will increase its electrification efforts in China, with the BMW iX model set to be released in November and the BMW i4 due in 2022.

More all-electric models from BMW will also be introduced, such as an all-electric version of the BMW 7 Series, the company said.

Judging from current sales across China and pre-orders for the BMW iX, consumers are enthusiastic about these new models, said Jochen Goller, president and CEO of BMW Group Greater China.

By 2023, BMW plans to launch 12 all-electric models in the Chinese market, covering almost all current market segments. By 2025, at least a quarter of BMW's vehicles sold in China will be purely electric, the company said.

This is in line with BMW's global sustainability goal of reducing the average life-cycle carbon emissions of vehicles by at least 40 percent by 2030 compared to 2019, it said.

In addition to launching new energy models, BMW will also expand its charging facilities, with plans to expand the number of charging piles in China to 360,000 by the end of the year, including 150,000 DC fast charging piles.

In the future, customers can use the My BMW APP to find charging piles and complete reservations and payments online to enjoy one-stop charging services, BMW said.