According to Wilson's report, the average price of BYD's vehicles has surpassed that of popular joint venture brand Volkswagen by about CNY 10,000.

In 2020, the Chinese NEV market had a stellar performance – NIO, Xpeng and Li Auto all delivered considerable volumes of vehicles. Meanwhile, we spotlight BYD, a car maker once invested by Warren Buffett, as a best-in-class electric vehicle company.

With its solid fundamentals, BYD is likely to become a major hardware conglomerate – much like Tencent or Alibaba in the consumer Internet sector. This article will examine the company's business segments, touch upon potential risks, and conduct an SOTP analysis to value its shares.

Wang Chuanfu incorporated BYD in 1995, inspired by the prospects of the Li-ion battery applications. Since then, he has led the company, building it into an agile manufacturing mammoth capable of starting new ventures and succeeding quickly across many fields.

For one, BYD started to produce face masks in the first days of the COVID-19 outbreak and has now become the biggest mask producer worldwide. Its business segments remain the same though – those are internal combustion engine (ICE) vehicles, EVs, power batteries, auto semiconductors and electronics assembly services.

BYD sells both ICE vehicles and EVs, primarily in China (but is getting more active abroad).

In 2020, it sold 231,000 units of ICE cars, a year-on-year (YoY) increase of 3.8%. The parts sales accounted for a significant share of total revenue but remained less profitable. Now, BYD is full speed ahead to transform itself into an EV-based company.

Because BYD didn't disclose its total ICE car sales revenue, we broke down its revenue streams and assumed the average selling price (ASP) was between CNY 100,000 to CNY 110,000.

Therefore, ICE generated revenue of CNY 24 billion in 2020. We expect the ICE business will drop 10% in the next few years as the sales momentum will shift to EV.

In 2022, the revenue will reach CNY 19.4 billion. With a 2x PS ratio based on Great Wall Motor and Geely Auto, the ICE business will be valued at CNY 38 billion.

In the meantime, EV sales have become the most valuable business – last year, BYD sold 162,000  EVs, a YoY decrease of 12.5%. After upgrading the 'dynasty' EV series, BYD entered the middle-to-high-end market.

Power battery sales is another core business for BYD alongside EVs. According to SNE research, BYD's installed capacity reached (link in Chinese) 7.8 GWh during the first half of 2021, ranking No.4 worldwide.

This is 23% of CATL's installed capacity. Therefore, conservatively speaking, we estimate the market capitalization of BYD's battery division will be one-fifth of CATL's. Thus, the power battery business is worth CNY 240 billion, based on the fact that CATL's market cap had already reached CNY 1,200 billion as of August 9, 2021.

Semiconductor manufacturing is another important segment for BYD. It is set to be spun off from BYD to go public. It features auto semiconductors, which provide IGBT, smart control IC, sensors and optoelectronic semiconductors. BYD semiconductors can independently design, manufacture, package and test chips.

It is the only company to achieve this in China. Based on our latest report, auto chips will be in high demand as more vehicles will be electrified in the future.

As per BYD's 2020 report, the semiconductor business was valued at CNY 7.5 billion in May 2021. We believe the figure will triple while launching on the open market. It is estimated that BYD will deliver semiconductors worth up to CNY 20 billion.

These products show low profitability similar to other electronics foundries like Hon Hai Precision. We refer to Hon Hai's 0.25x 2022 PS ratio and project 12% growth in the next two years. We calculated that BYD Electronic is valued at CNY 18 billion.

To sum up, BYD is valued at CNY 988 billion. Even so, we think the estimation is a bit conservative as some assumptions aren't considered in it. BYD's EV will deploy more self-made batteries and chips, which will save a lot of costs for the company in the long term.

What's more, rumors said BYD's battery had been tested by Tesla and would likely be equipped with Tesla's vehicles. This potential opportunity will significantly boost BYD's valuation in the battery division. 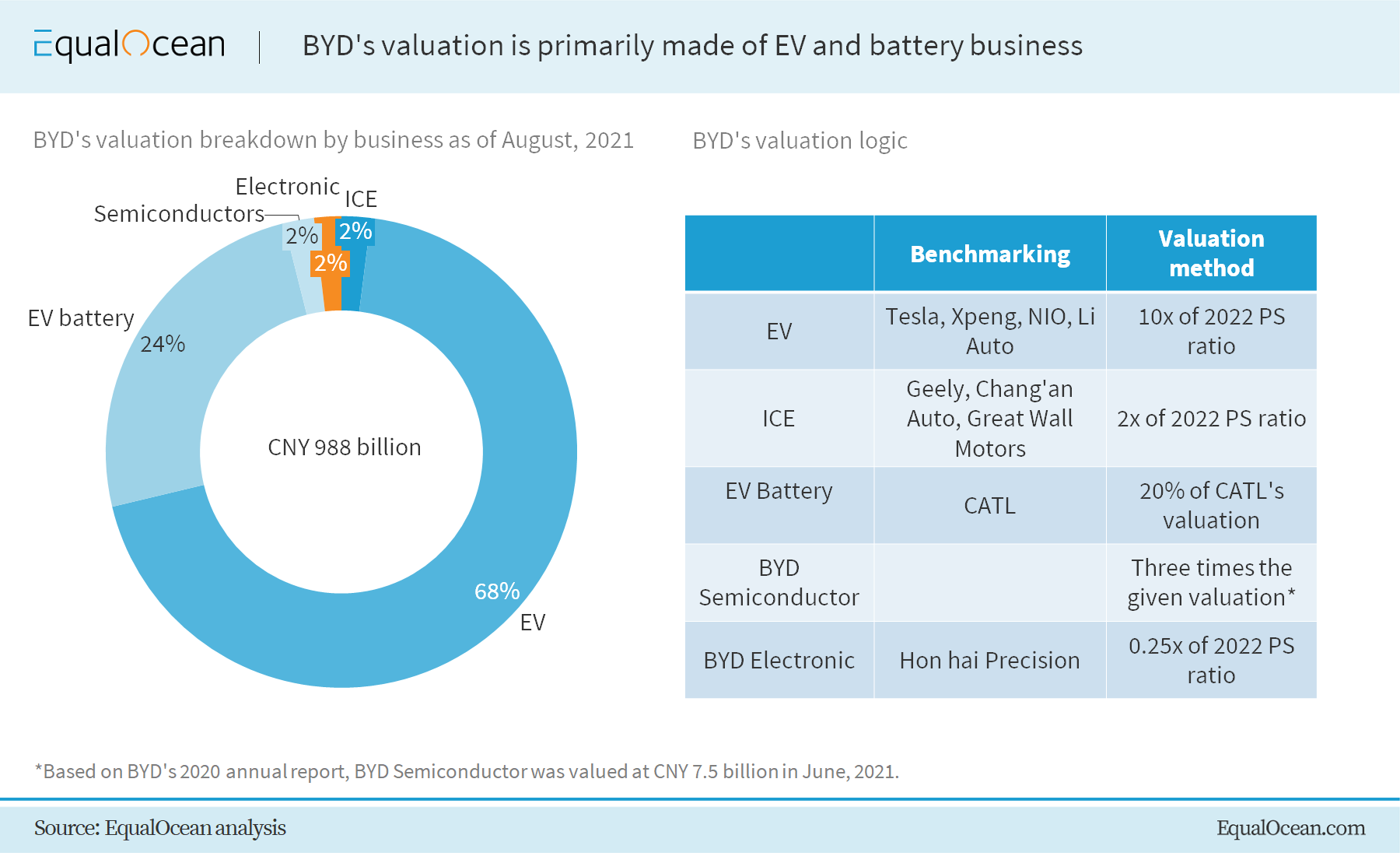 BYD's EV sales were affected by the industry's downslide in 2019 and 2020. Moreover, the EV market has been involved with intensified competition, as proved by the price slash of a few models and few companies leaving. BYD, with its comprehensive business mix, should have the means to face these challenges.

Viewed as part of the big picture, BYD is a company less profitable than some of its auto peers – one with a 2.6% net profit margin in 2020. We consider the company to have set margin improvement as a long-term goal, while also expanding in the EV-battery and related battery segments.

Although BYD just saw a market cap rally in the past few days, we believe it is still undervalued and has a 22% upbeat opportunity as of August 20, 2021.

This article was first published by Niko Yang and Ivan Platonov on EqualOcean, an investment research firm focusing on China.