In May 2021, China's power battery installations totaled 9.8GWh, up 178.2 percent year-on-year and up 16.2 percent from April, according to data released Friday by the China Automotive Battery Innovation Alliance.

The installed base of ternary batteries was 5.2GWh, with a market share of 53 percent, up 95.3 percent year-on-year and up 1 percent from April.

Lithium iron phosphate batteries were installed at 4.5GWh, with a market share of 46 percent, up 458.6 percent year-on-year and 40.9 percent from April. 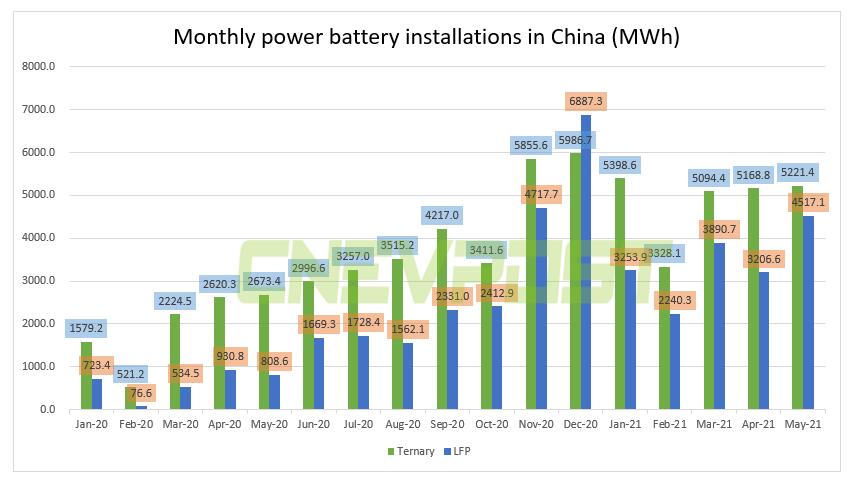 Lithium iron phosphate batteries are gradually replaced by ternary lithium batteries around 2015 because of the low energy density and China's policy reasons.

However, in recent years, lithium iron phosphate battery technology has gained progress, the safety brought by the stability of the battery and lower costs, and other characteristics, it is also increasingly adopted by more and more car companies.

As more and more car companies, including Tesla, XPeng Motors, launched models equipped with lithium iron phosphate batteries, the installed base of this battery has climbed significantly.

Earlier today, cls.cn cited sources familiar with the matter as saying that Tesla could launch a China-made Model Y with a CATL-supplied lithium iron phosphate (LFP) battery in July.

In early October last year, Tesla began using lithium iron phosphate batteries in the entry-level Model 3 produced at the Shanghai Gigafactory, and lowered the price from RMB 291,800 to RMB 249,900 by 41,900.