Retail sales of new energy passenger vehicles in China were 163,000 units in April, down 12 percent from March, according to data released Tuesday by the China Passenger Car Association (CPCA).

The CPCA began publishing retail sales of new energy passenger vehicles in December of last year, and prior to that only wholesale sales data was published. 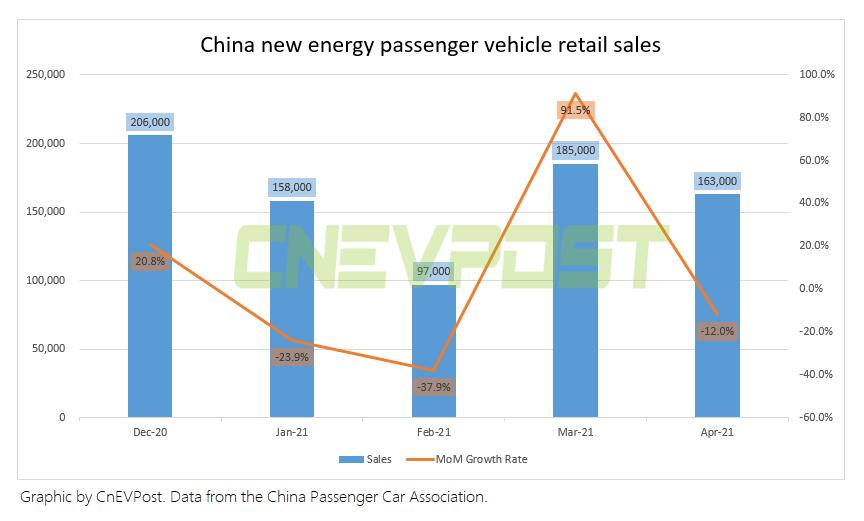 Wholesale sales of new energy passenger vehicles stood at 184,000 units in April, down 8.7 percent from March and up 214.2 percent year-on-year.

Wholesale sales of regular hybrid passenger vehicles reached 47,000 units, which increased 73 percent from the same period of last year and 2 percent from March.

Looking at the Chinese auto market as a whole, Chinese passenger vehicle retail sales reached 1.608 million units in April, down 8.3 percent from March and up 12.4 percent year-on-year.

Mainstream joint venture brands retailed 770,000 units in April, up 2 percent year-on-year and down 9 percent from March.

The CPCA said that while affected by the chip shortage, prices in the Chinese car market were basically stable from January to April, with price increases for individual models not evident.

Due to the gradual impact of factors such as the Renesas Electronics fire in Japan in March, the chip supply order is relatively chaotic, resulting in incremental production in May poses some risk, the CPCA said.

Low production makes it more difficult for dealers to build inventory, and the retail promotion strategy needs to accelerate the pace of adjustment, which is not conducive to production and sales growth in May, the CPCA said.