(Correction: A previous version had an extra 0 in the Q1 delivery figures.)

Chinese electric carmaker NIO suspended production for five days this week because of a chip shortage, prompting many investors to ask if this is something to worry about. At least in JP Morgan's view, there is nothing to worry about yet.

The bank said in a research note on March 28 that assuming NIO delivers 19,500 units in the first quarter and all else remains equal, this represents a potential 2/3% top/bottom line shortfall respectively against their forecasts.

Along with the suspension, NIO has revised down its first-quarter delivery guidance from the previous 20,000-20,500 units to 19,500 units.

JP Morgan's delivery estimates for NIO in the first quarter were 20,000, which the bank said: "our current forecast remains achievable and potentially conservative."

The bank said they remain positive on NIO. Here are their main arguments (highlights are ours):

The stock has pulled back significantly by 36% since mid-Feb (vs. broader OEMs-33% or MXCN -18%), likely due to sentiment (of favoring value over growth), liquidity and concerns over chip shortages, as well as impending mounting competition especially after the Shanghai Auto Show (April 2i-28).

For the demand and supply equation in the NEV market, we believe it is now a consensus view that demand will be very robust and we agree that competition will intensify in 2H21 after numerous new models arrive.

Nevertheless, in NIO's target premium segment, we expect relatively limited competition and forecast the company to double its sales to 90k units vs. 44k last year.

On near-term chip shortage and production shortfall, we believe the impact on 12-month forward earnings will be limited if supply tightness eases towards year end, as we anticipate.

NIO is scheduled to report 1Q2i results around May 28". We expect a further uptick in revenue (YoY and QoQ) and continued expansion in margins. We retain our full-year estimate unchanged for now.

JP Morgan has a $70 price target on NIO and an Overweight rating.

In the meantime, Edison Yu, a Deutsche Bank analyst who follows the Chinese EV industry very closely said NIO could be negatively impacted during the second quarter, suggesting some downside to their existing 22,500 deliveries forecast.

"We will continue monitoring the supply side situation in the coming weeks," Yu said in a note on March 26.

Yu reiterated his $70 price target and Buy rating on NIO. 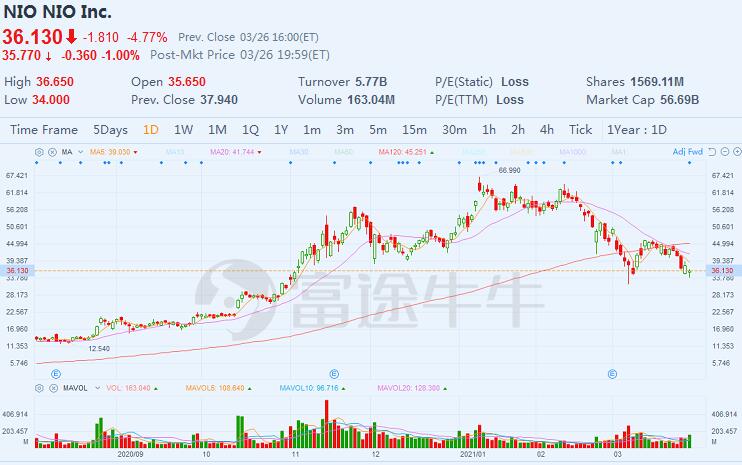