"We are targeting the market of Mercedes-Benz, BMW, Audi ...... hope to see if there is a chance that in five years or more, we can be one of the most important players."

According to CCTV, Li revealed this goal to Li Ning, the founder of sportswear giant the Li Ning Company, during a previous NIO Day event, who also shared his entrepreneurial secret: "To start a business, to live is a great victory."

Referring to his goal, NIO's Li quoted the famous Three Kingdoms era in Chinese history, and his words, if translated directly, were "The world is divided into three kingdoms, and we want to be one of them."

This expression is widely used in China as a metaphor for ambition, so a more accurate English expression of Li's meaning would be "wishing to be one of the most dominant players."

For those who do not know Chinese history, it is necessary to further explain China's Three Kingdoms era, a time of warlords and rivalries, much like the current phase of China's new energy vehicle market, where ambitious people want to gain their own territory.

During the stable period of the Three Kingdoms era, three military generals, Cao Cao, Liu Bei, and Sun Quan, each occupied a large amount of land to establish their own kingdoms.

There are many books in China describing that exciting novel for entrepreneurs, the most successful work being Romance of the Three Kingdoms, written by Luo Guanzhong, born around 1330.

NIO is positioned as a premium brand, and Li has also been making German car brands BMW, Mercedes-Benz, and Audi as its main competitors.

In an interview with media including cnEVpost in Chengdu on Jan. 10, Li responded to the company's share price surge over the past year.

He said NIO's share price movement is beyond the company's control while admitting that there is still a gap between NIO and BMW.

"The reality we see is that right now NIO's sales are less than 2 percent of BMW's, and NIO is still a very small company. Market capitalization is determined by the market and we can't do much about it," he said.

However, he also said that this is not a bad thing and represents the existence of very high expectations from investors for NIO, which can bring more pressure and forward momentum to the company. 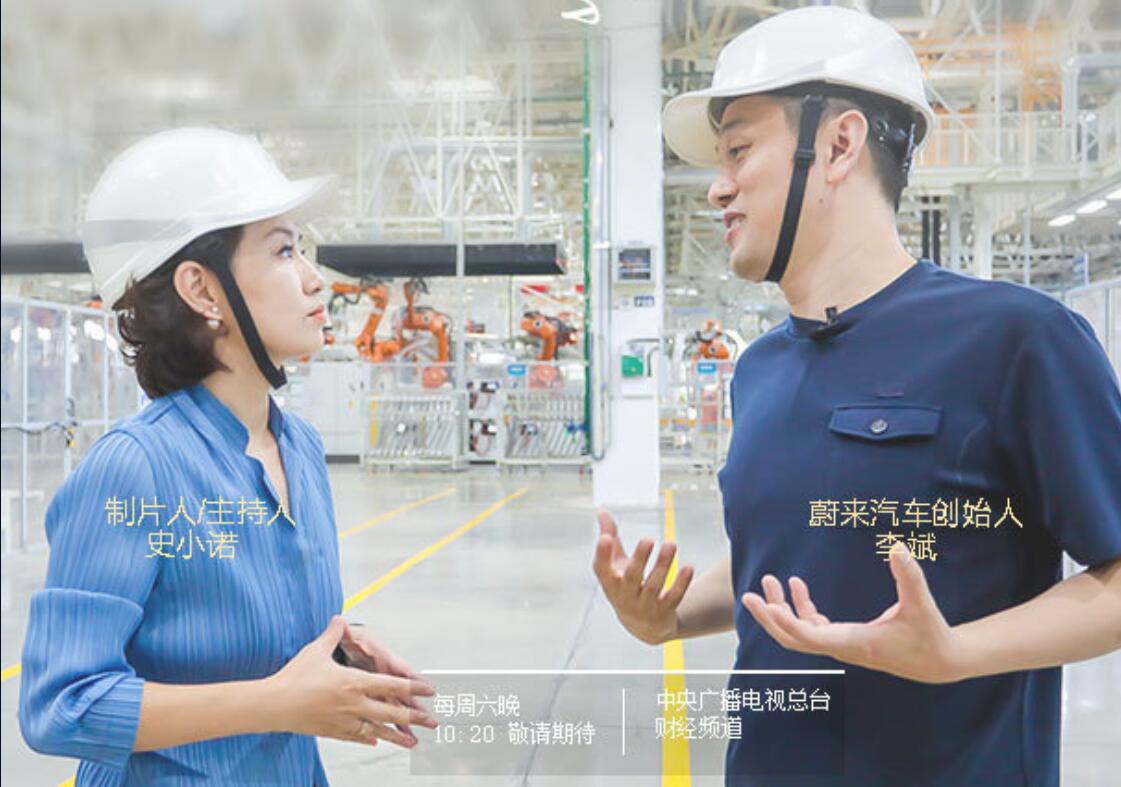 The CCTV program, to be broadcast on the evening of February 6, will also showcase NIO's factory in Hefei, Anhui Province, which was also visited by cnEVpost in early December 2020.

In the preview of the program, CCTV said the site of the plant was originally a swampy area, and NIO went from construction to production in just 20 months. "When you walk into the factory, you can see that the interior is advanced and orderly."

Inside the plant, a series of accolades won by NIO are displayed: the NIO ES8 was ranked No. 1 in the 2019 J.D. Power list of China's new energy vehicle quality, already surpassing well-known car brands such as BMW and Tesla, and the NIO ES8 won the European Body Award, becoming the first Chinese premium brand to be selected at the European Body Selection Conference.

According to CCTV, in Li's opinion, this series of accolades is an indication that Chinese manufacturing has reached a high level and that spring has arrived for local electric vehicle brands.

During the last CCTV "Meet The Big Names" program in October 2018, Li's comment that "Porsche's factory is no match for JAC NIO's factory" sparked controversy in China.

Li later issued a clarification, saying that he had visited Porsche's factory in Stuttgart and that it was unfair to compare the new factory built in 2018 with the one built a long time ago, and that he only wanted to emphasize that the new NIO factory in Hefei is indeed of a very high standard.

According to CCTV, Li would mention the matter once during his Saturday evening show, saying, "I visited the Porsche factory more than 20 years ago, and at that time I thought we were very different from Europe ...... Now, Chinese manufacturing has really reached a very high level in many aspects. "

On January 1, 2021, Tesla announced the prices of the China-made Model Y, which were more than RMB 100,000 yuan lower than the price of the previous imported version. The move was seen by many as a big shock to NIO.

The CCTV program will show that "Tesla lowered the price, but NIO's sales increased."

NIO delivered 7,225 vehicles in January, up 352.1% year-on-year and setting a new monthly record. This number is 3 percent higher than in December. 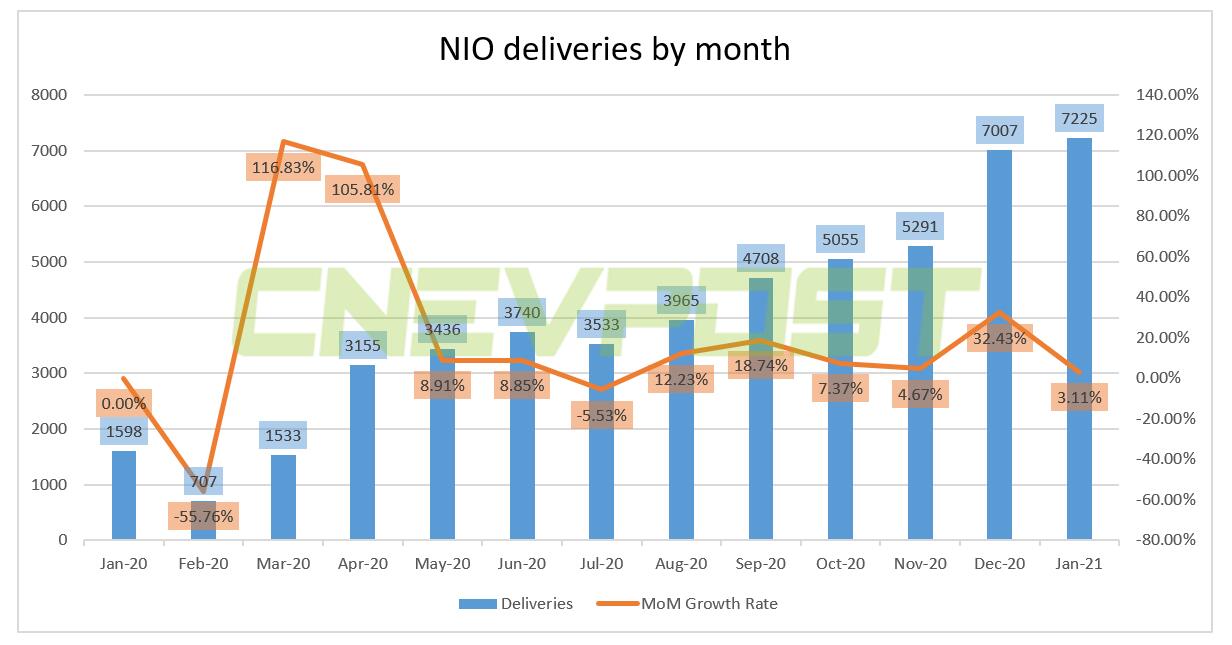 As noted by cnEVpost, the delivery volume for NIO was unexpectedly high, as January is considered to be the month where it will be hit the hardest by the dramatic price reductions of the China-made Tesla Model Y.

CCTV will say on Saturday night's show that the most interesting thing is that Tesla's first price cut had an impact on NIO sales, and then when the price was cut again, NIO sales increased instead.

In the face of "price blows" from rivals, Li said that NIO does not cut prices because he believes that price cuts are emotionally damaging to old customers. "We have to be grateful to the users who have already chosen us and treat them well. This is the bottom line of a company, and the bottom line of each company is not quite the same," Li will say on the CCTV program.

Li also said you get what you pay for, "The price of tuna is definitely not the same as carp." Li would rather spend the money on building more battery swap stations for users and improving services, because "you will always have users who recognize your value, as long as you're not making dirty money."

CCTV quoted Li as saying that in 2020, NIO's sales volume doubled compared to 2019, but the car supply chain is complex and involves a lot of parts, so it will take some time to expand the capacity. Li, who has been through many storms, said he wants to move "stably".

CCTV mentioned that in 2018, NIO was listed on the New York Stock Exchange, and while everyone was cheering for it, only Li himself felt that the IPO was not a success.

He revealed in "Meet The Big Names" that NIO planned to raise $2 billion, but only ended up with $1.1 billion. The planned fundraising should be enough for NIO to "burn" for two years, but in reality, it was only enough for one year.

What made Li feel even worse was that on a public occasion, an American hedge fund investor openly said, "You are all liars.

Compared with the last time Li took Bitauto to the US, Li felt that "an era was over". But even with the disruption, Li's confidence in the venture remains as strong as ever, according to CCTV.