The release of year-end automotive consumer demand is at risk and uncertain due to the recent rebound of the Covid outbreak in China, which has impacted auto showroom traffic and order patterns, the CPCA said. 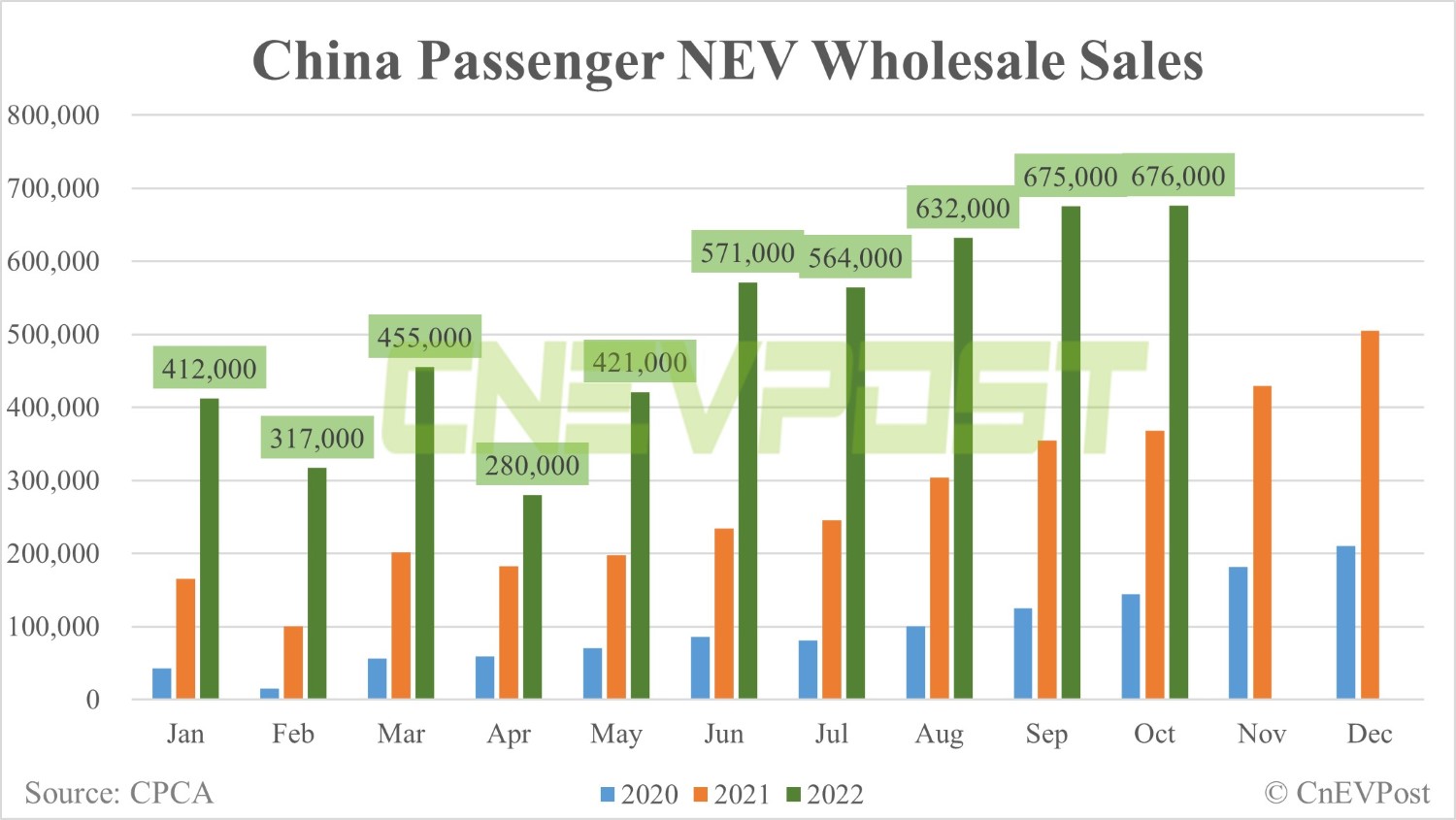 Wholesale sales of new energy passenger vehicles (passenger NEVs) in China were 676,000 units in October, essentially unchanged from 675,000 units in September, but a record high, according to data released today by the China Passenger Car Association (CPCA).

Battery electric vehicles (BEVs) continued to account for the majority of passenger NEV sales, with wholesale sales of 508,000 units in October, up 67.7 percent year-on-year and accounting for 75 percent of all NEV sales. 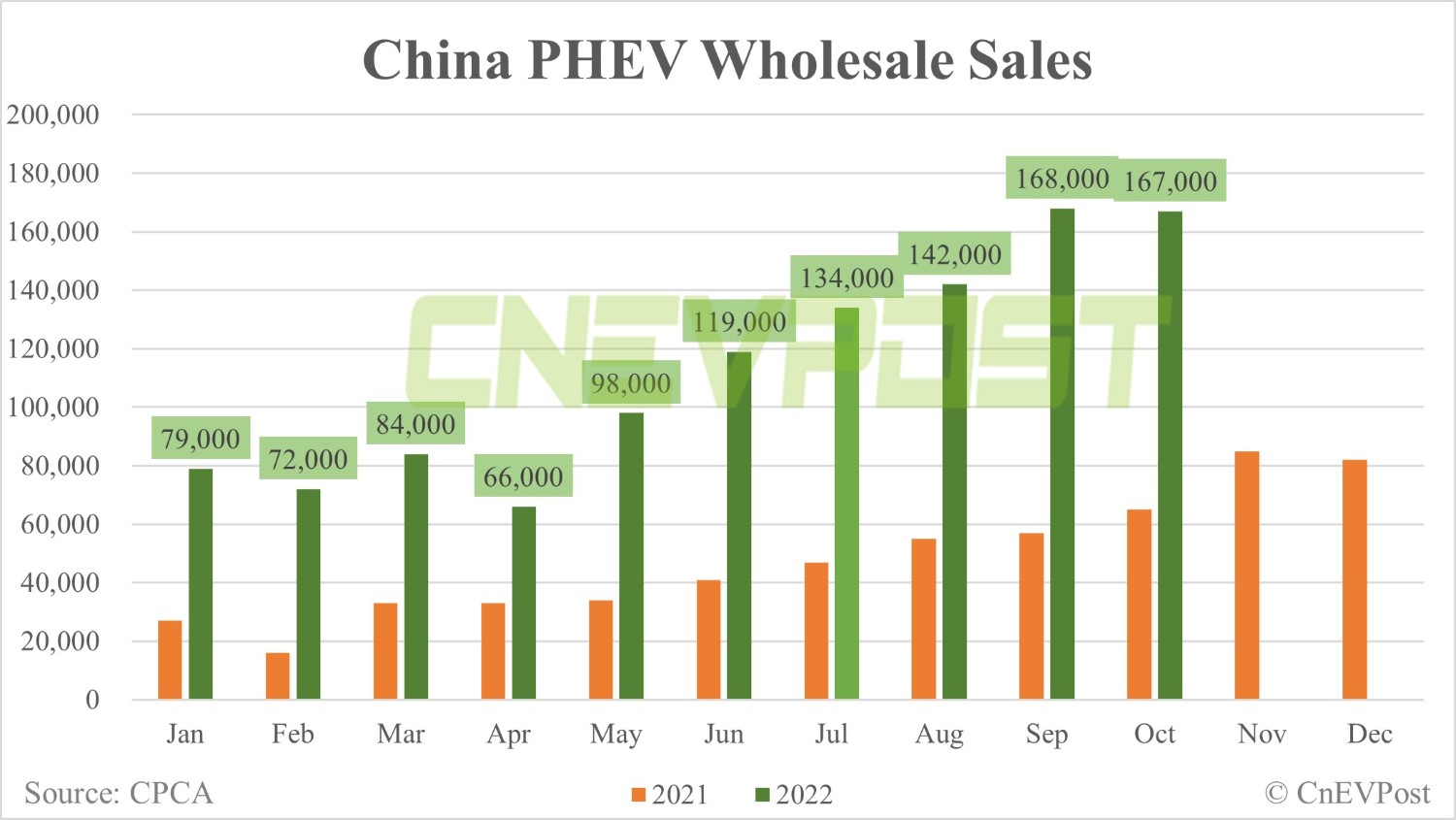 In October, both China's NEV and traditional internal combustion engine vehicle markets were impacted by Covid controls in some regions, the CPCA said.

That changed the pattern of the peak sales season typically seen at the end of the year, leaving September and October relatively uneventful, the CPCA said.

From January to October, China's wholesale sales of passenger NEVs were 5.015 million units, up 110.8 percent year-on-year.

In October, wholesale sales of all passenger vehicles in China were 2.191 million units, up 11 percent year-on-year and down 4.6 percent from September, according to the CPCA.

This means that in terms of wholesale sales, China's penetration of passenger NEVs was 30.8 percent in October, a record high. 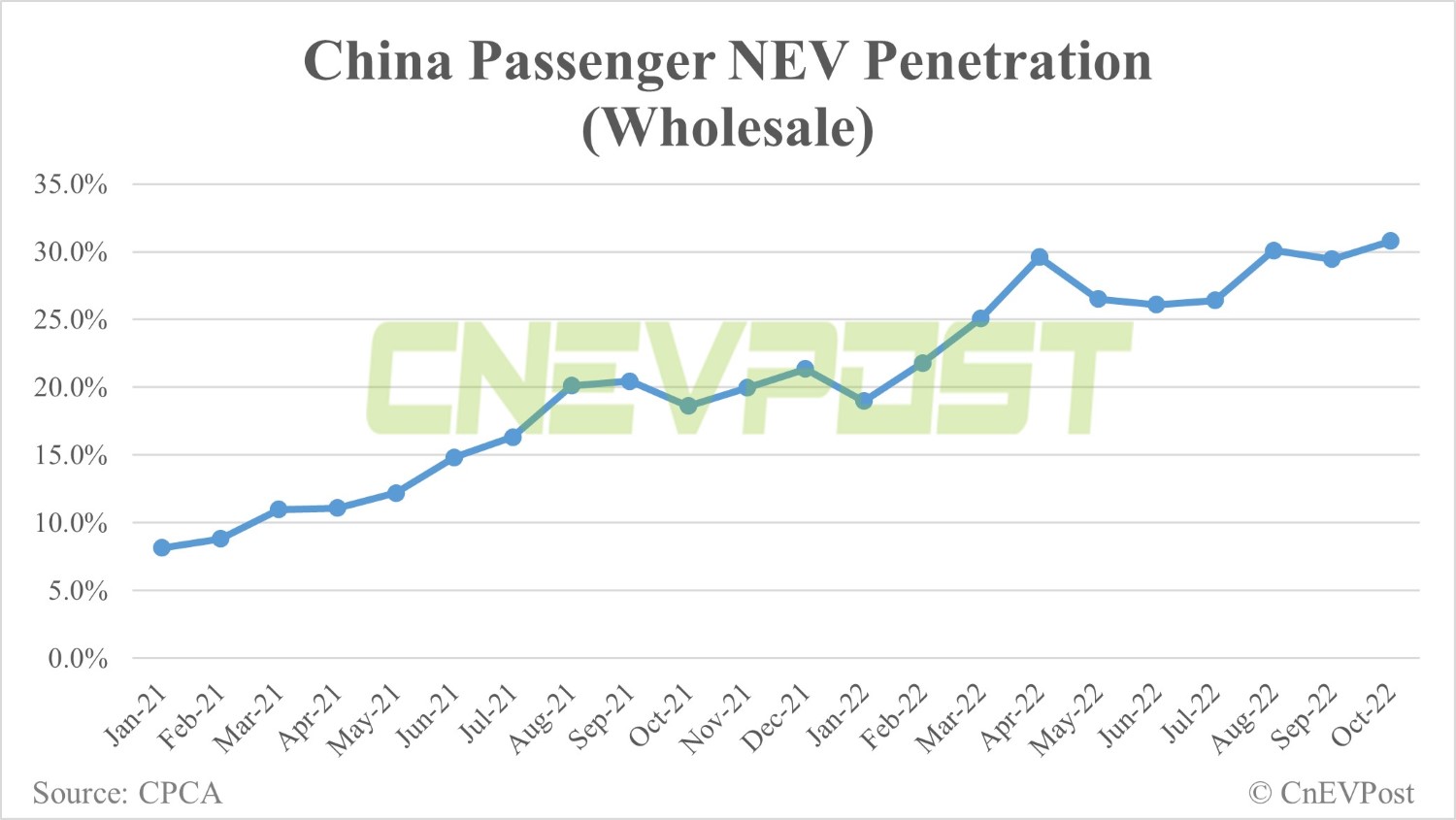 Local brands continue to see leading NEV penetration, at 47.7 percent in October, according to the CPCA. Luxury brands are at 31.4 percent, while mainstream joint venture brands are at just 4.7 percent.

In terms of retail sales, China's passenger NEV sales were 556,000 units in October, up 75.2 percent year-on-year and down 9.0 percent from September. 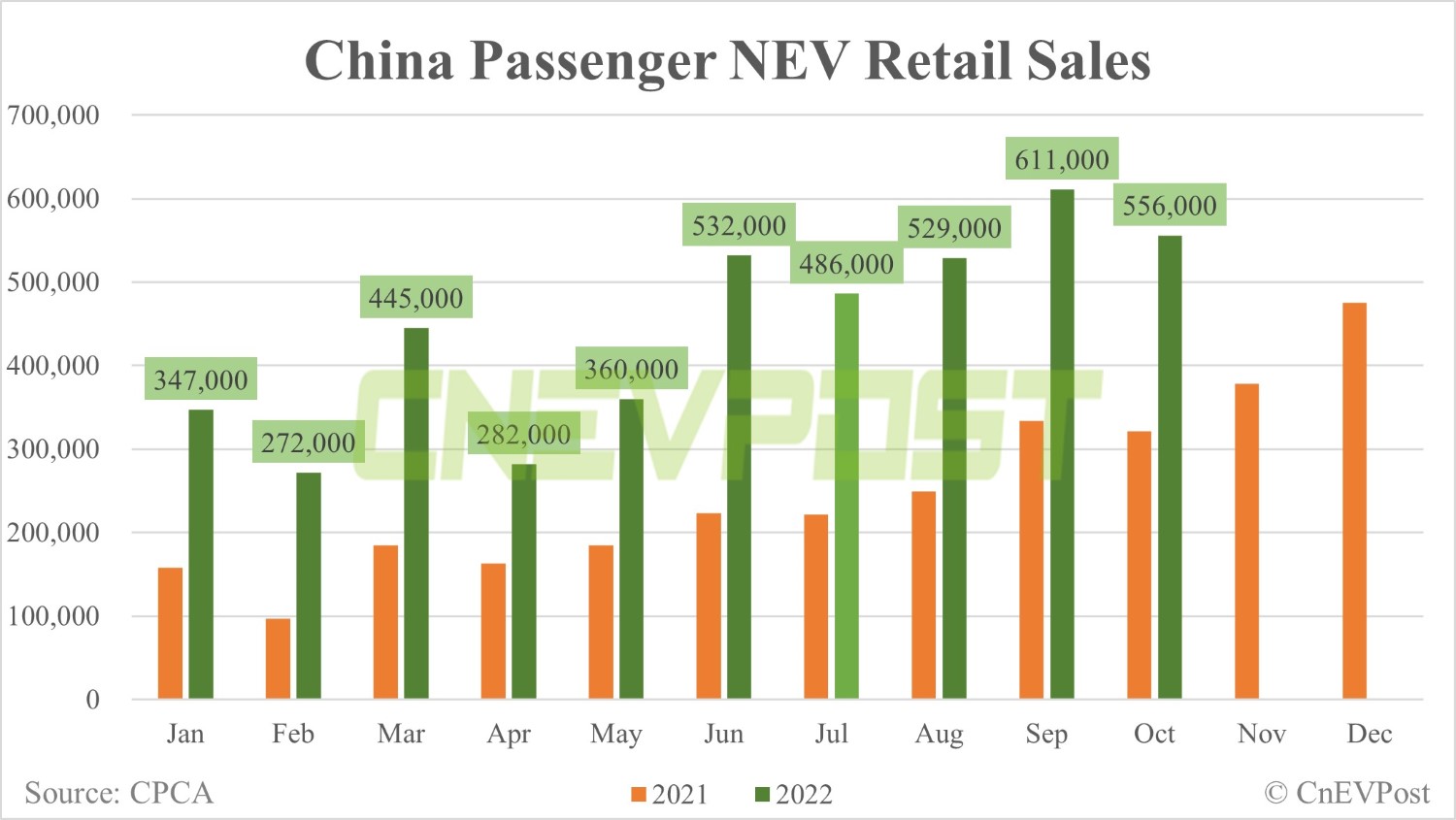 From January to October, retail sales of passenger NEVs in China were 4.432 million units, up 107.5 percent year-on-year.

In terms of penetration, retail sales of passenger NEVs in China accounted for 30.2 percent of the 1.84 million units sold in October, down from 31.8 percent in September. 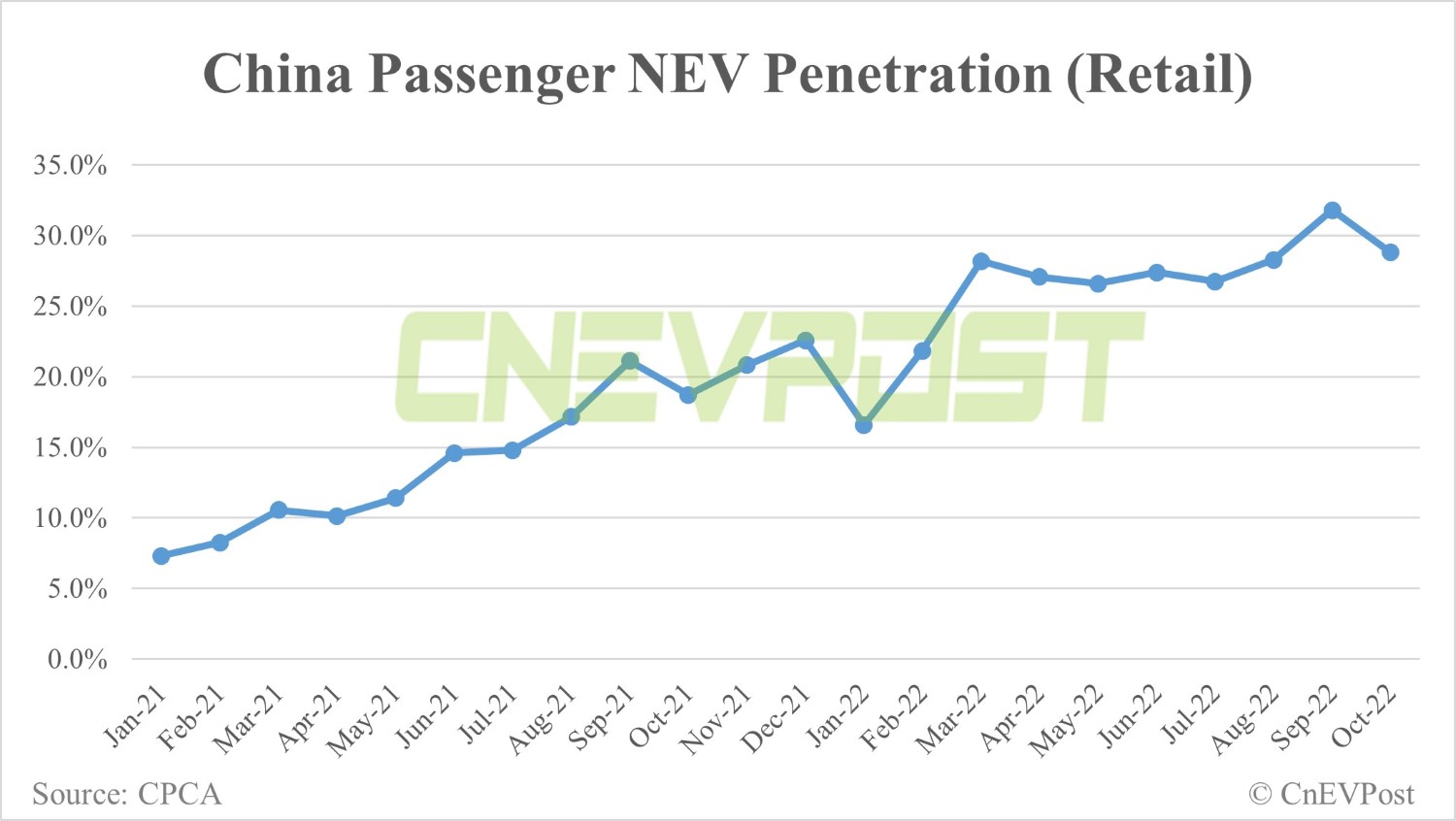 Looking ahead to November, the CPCA said there are 22 working days this month, flat compared to last year, while the global chip shortage has eased significantly this year.

While overall production forecasts for the year have been affected by parts shortages and energy supply issues for some brands in overseas markets, production in China is now largely stable, the CPCA said.

However, the CPCA also noted that the release of automotive consumer demand at the end of the year is at risk and uncertain due to the recent rebound of the Covid outbreak in China, which has impacted auto showroom traffic and orders.