Tesla cuts prices of Model 3 and Model Y in China

All versions of Tesla Model 3 and Model Y are priced lower in China, with the entry-level Model Y dropping below RMB 300,000 and eligible for purchase subsidies. 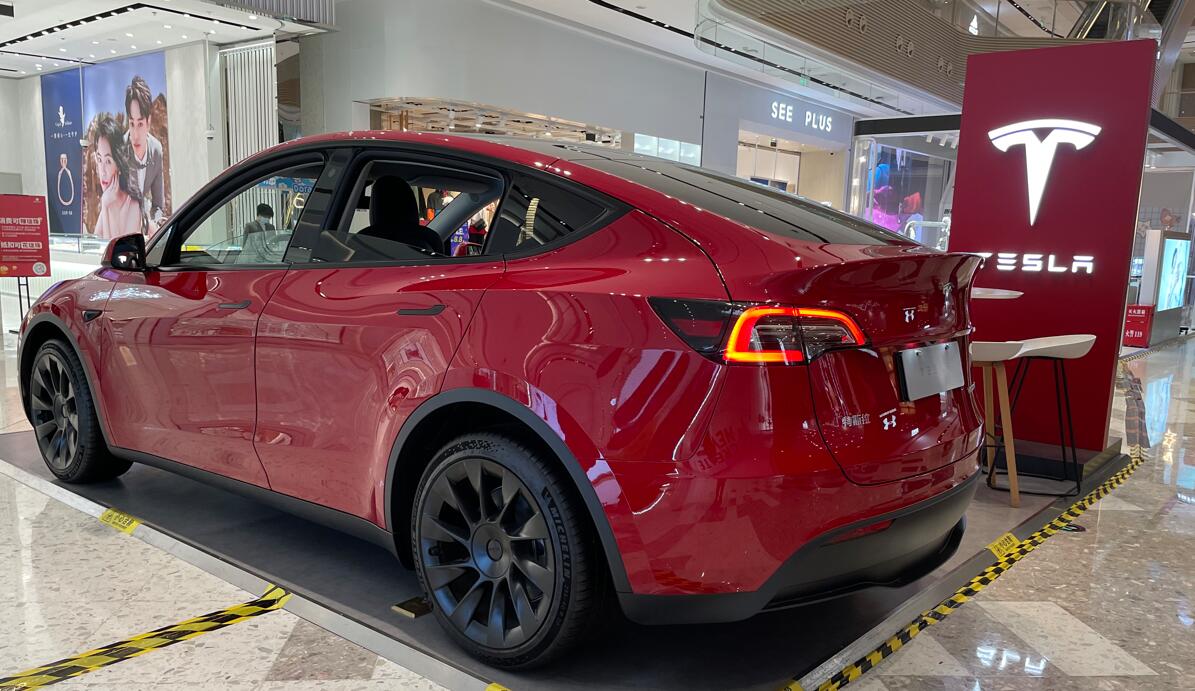 Tesla has cut prices for all of its Model 3 and Model Y models in China, as it appears to be starting to face lower order reserves.

The latest starting price for the dual-motor all-wheel drive Model 3 Performance is RMB 349,900, down from the previous RMB 367,900.

The entry-level rear-wheel drive Model Y has an updated starting price of RMB 288,900 after subsidies, down from RMB 316,900 previously.

It is worth noting that the entry-level Model Y was previously not eligible for China's purchase subsidy, as it was priced above RMB 300,000.

According to China's current subsidy policy, new energy vehicles (NEVs) priced above RMB 300,000 are not eligible for subsidies, except for models that support battery swap.

In addition to lowering the price of the entry-level Model Y, Tesla is also offering the silver paint, which previously cost RMB 8,000, for free in addition to the black paint. All Model 3 and other versions of the Model Y are currently only available in black paint for free. 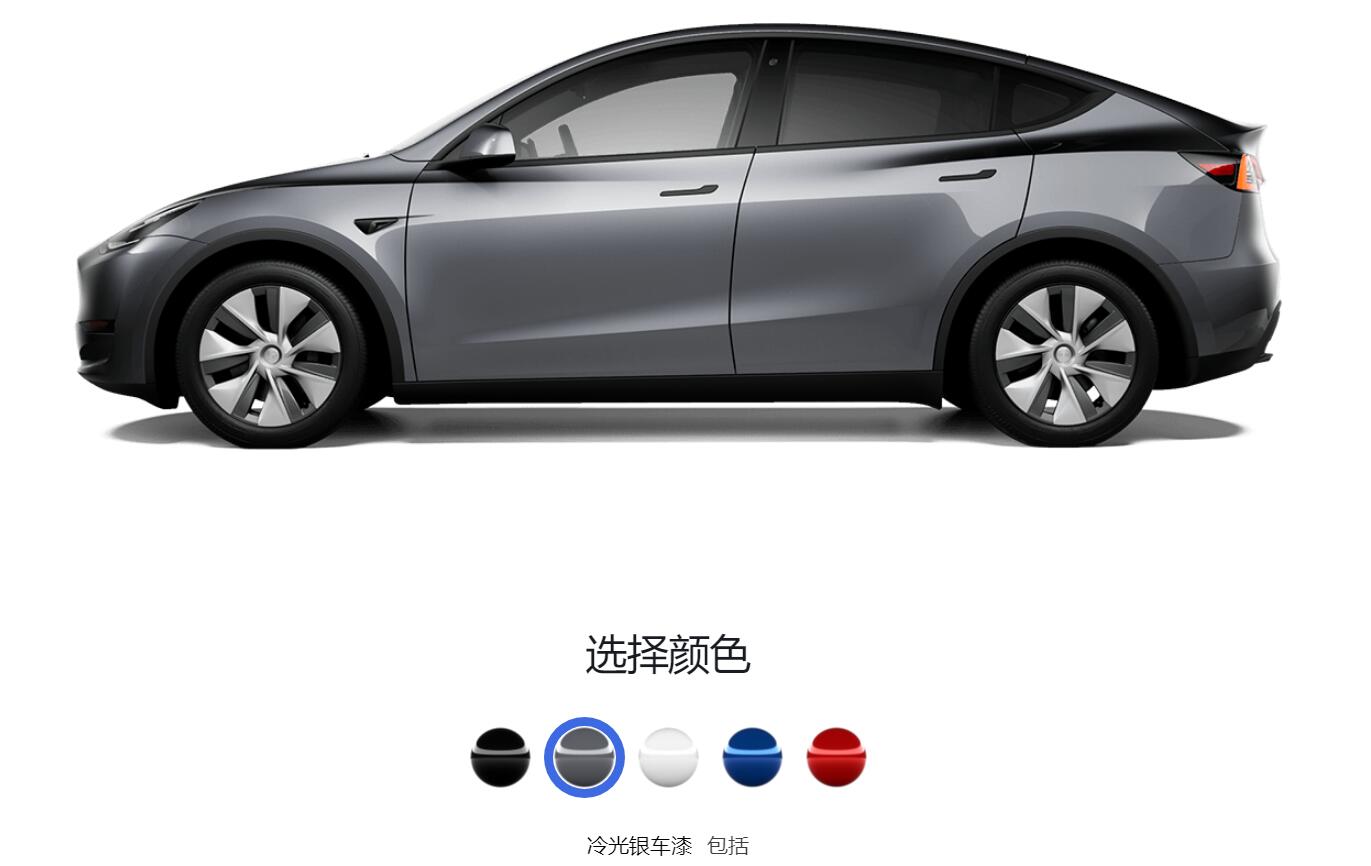 The latest starting price for the dual-motor, all-wheel drive Model Y Long Range is RMB 357,900, down from RMB 394,900 previously.

On the configurator pages for the Model 3 and Model Y, Tesla reminds consumers at the top that China's national purchase subsidy policy for NEVs will end on December 31, and vehicles that receive a license plate after that date will not be eligible for subsidies.

The latest information (October 24) on the Tesla China website:

Tesla China also shared information about the vehicle price adjustment on its Weibo today, and said that new orders starting today will not be eligible for the insurance subsidy previously offered. 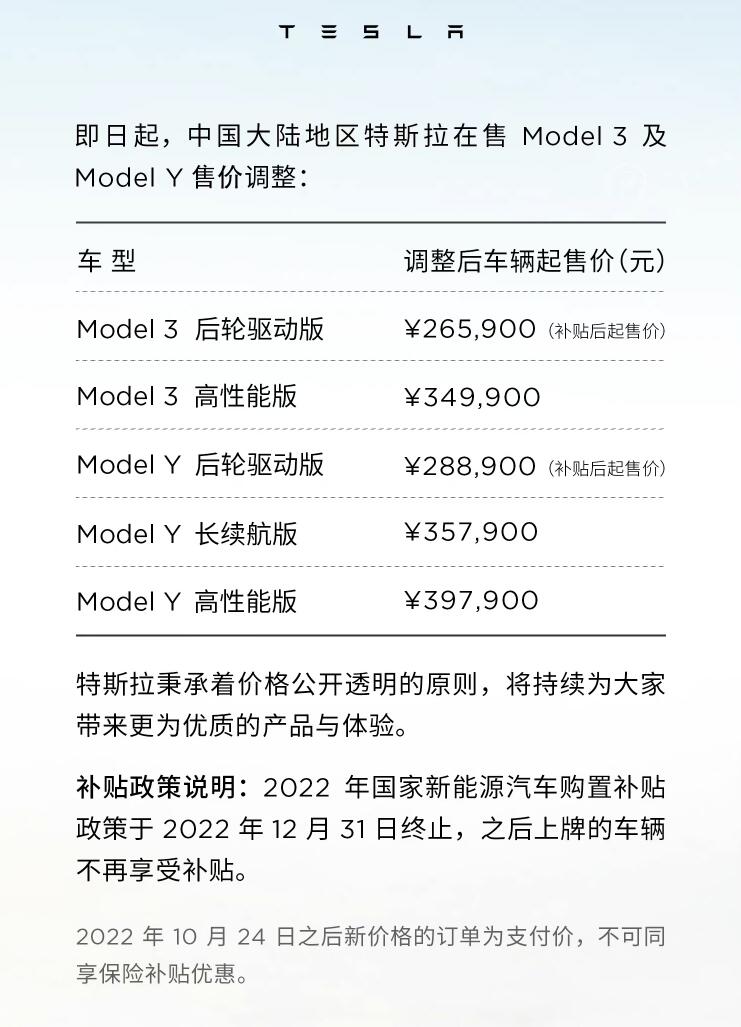 On September 30, local technology media Huxiu cited unnamed multiple sources as saying that the prices of Tesla Model 3 and Model Y will be significantly reduced in China, with the price of Model Y expected to be reduced by as much as RMB 40,000. But Tesla later denied this.

The average number of visitors to Tesla stores has recently dropped by 50 percent compared to April and May this year, from 30 to 35 batches per day to 15 to 17 batches per day, Huxiu's report quoted Sun Shaojun, founder of local car consumer platform Che Fans, as saying.

"Local Chinese brands are growing too fast and putting Tesla up against a wall," Sun said.

Although Tesla did not begin reducing its prices earlier this month, it announced on October 1 three purchase benefits for Chinese consumers, including insurance subsidies, 0 down payment financing leases, and preferential loan rates.

Consumers who purchase the Model 3 and Model Y between October 1 and December 31 and have them delivered will receive an RMB 7,000 subsidy if they choose to purchase vehicle insurance from Tesla's partner insurers, according to Tesla's poster at the time.

This is the first time Tesla has publicly marketed its vehicle insurance offer for Chinese consumers, after offering such deals in stores in September.

On September 16, local media outlet The Paper reported that for Tesla owners who get deliveries from September 16 to September 30, they could receive an RMB 8,000 subsidy if they choose to purchase insurance in Tesla stores.

Despite this, insurance registrations for Tesla vehicles in China saw a significant decrease in the first two weeks of October, likely due in part to consumers already postponing their purchase plans in anticipation of price reductions.

From October 3-9, Tesla China sales, as measured by insurance registrations, were 2,218 units, according to figures previously shared by auto blogger @朱玉龙-YL. The number was 1,724 units from October 10-16.

In Case You Missed It
China NEV insurance registrations in 4th week of Nov: BYD 38,480, Tesla 16,121, NIO 3,759
NIO rumored to be planning to order vehicle carriers
Internal speech: William Li on NIO's new businesses, and why it's on right side of trend