The base model of the Zeekr 001 might not lead in any one category, but as a package, for its price, it's bloody hard to beat. 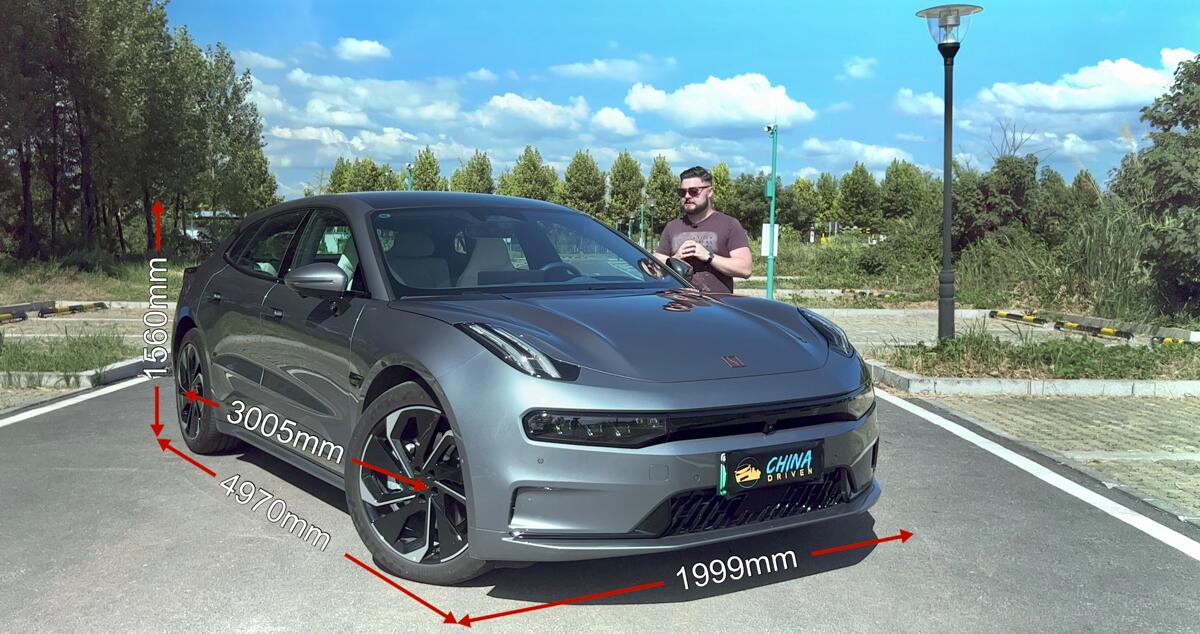 Zeekr is yet another brand owned by the Chinese powerhouse Geely Automotive, alongside Volvo, Lotus, Polestar and many others.

The Zeekr 001 was first introduced as the Lynk & Co "Zero Concept" before being unveiled days before the 2021 Shanghai Auto Show as the first model of a brand new premium EV brand, Zeekr.

Most EV companies' model line-up includes an entry model, then a long-range model with any type of performance model sitting at the top of the pile. The magic of the Zeekr 001 all happens for its base model, where customers are given an enticing proposition.

You have the option at 299,000 RMB to choose between a single RWD motor long-range version or a base AWD Dual motor, which offers the same power and acceleration as the more expensive models in the range.

There are some trade-offs for the extra power, but giving customers the option to pick long-range or mind-boggling performance for the same price is ingenious. 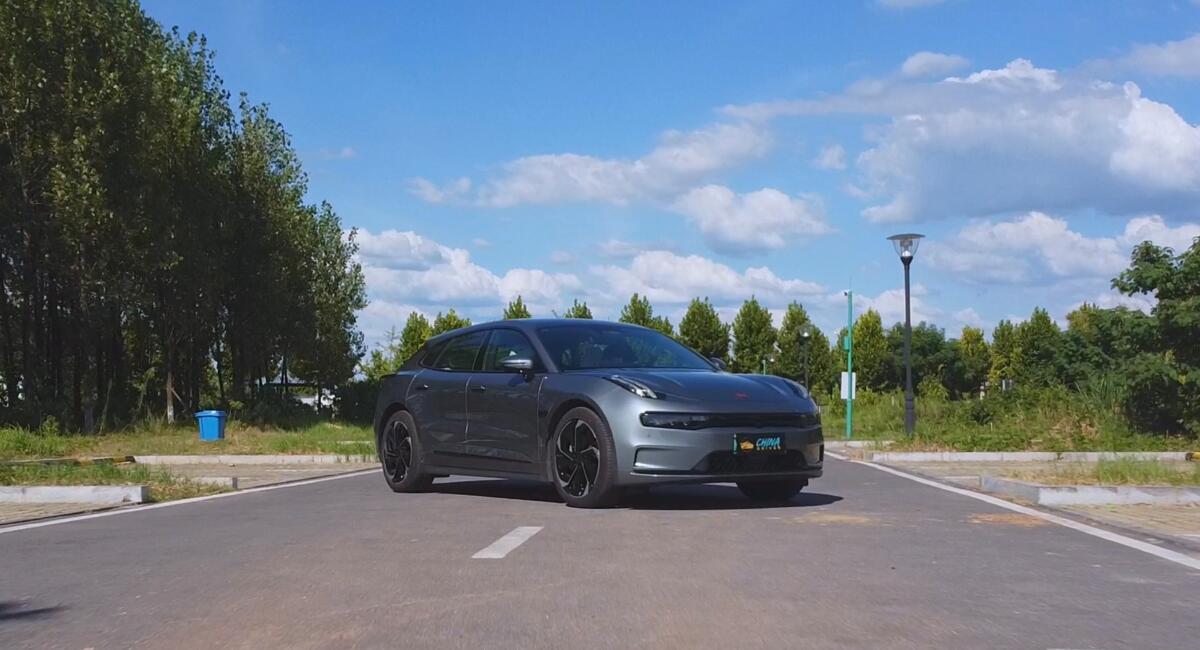 One of the biggest trade-offs in the base AWD model is probably the battery, and subsequently the range.

In terms of range the base AWD obviously has the lowest range claimed to be 333 miles, whilst the base RWD long range claims the highest range at 455miles.

The mid-level ME Edition claims a respectable range of 383miles, whilst surprisingly the top of the line YOU Edition claims the second longest range of 404miles. The YOU Edition is able to decouple its front motor during cruising allowing it to in theory return a higher range estimate.

However, bear in mind these are all on the hopelessly optimistic CLTC standard, as such these paper figures could be as much as 30% higher than real-world usage.

All models can charge using a fast charger in 35-40mins. However, the Zeekr 001 sits on Geely's new SEA platform which can handle 800V charging.

If you have access to an 800V charger, Zeekr claims 75miles in 5mins. However, 800V chargers right now in China are basically non-existent for the most part. 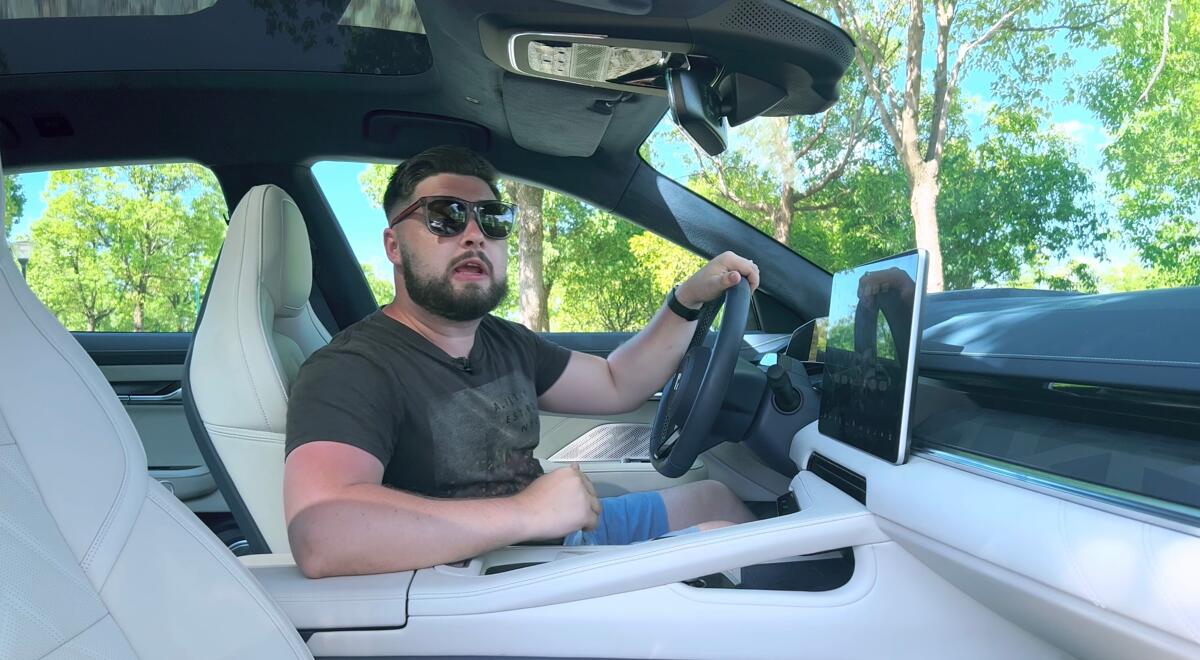 The Zeekr 001 performance is two-tiered. The long-range model logically has the lowest performance with 200kW (272hp) and 384Nm (283ft-lb) from its single RWD motor. Performance isn't a priory for this model but 0-100kph is done in 6.9s, which is more than enough for normal on-road driving.

All other models in the range are dual motor dispatching 0-100kph in 3.8s, even the base AWD version. They all possess 400kW (544hp) & 768Nm (566ft-lb) split evenly 50/50 front and rear. This results in maybe one of the most brutal launches I've experienced in an EV, simultaneously being pushed and pulled in equal amounts.

The base AWD front end does scrabble for grip raising questions if wider tires, as found on the top heavier model, might improve the launch. That top AWD model is the only model using the Yamaha high-performance motors, which although on paper have the same raw power stats do supposedly provide lower consumption.

The top model comes standard with air suspension while the rest make do with a traditional spring setup. I've now come to expect good things from Geely products in terms of dampening and the Zeekr 001 base AWD doesn't disappoint. With a double wishbone in the front and multi-link in the rear, the AWD base rides superbly & handles nicely.

I haven't driven a model with air suspension, but unless it is like gold dust absolutely transforming the ride, which I doubt, I wouldn't be looking to option this at $4,000. The base suspension is well dampened and rides extremely well.

The Zeekr 001's steering is direct and can corner decently, although its cousin the Polestar 2 has much more talent in this area as well as being more engaging. You do have to take into account that with a weight between 2225kg and 2350kg it is extremely heavy and you feel that in the corners and under hard braking. 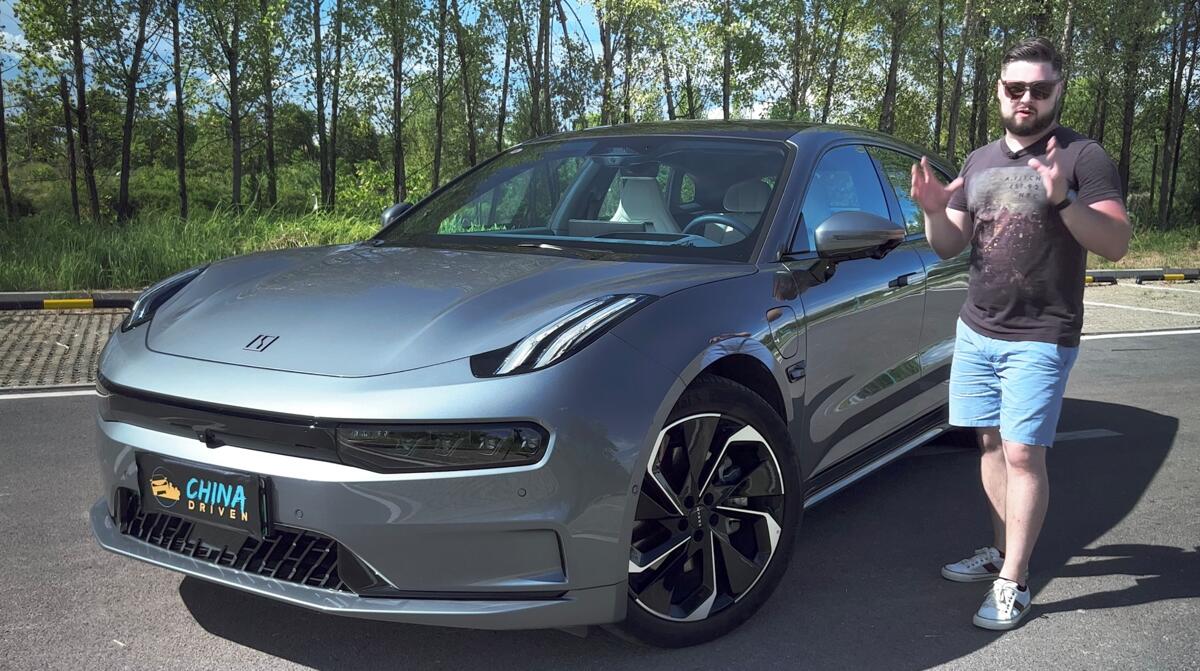 First thing's first, the front end looks like a Lynk & Co. Not surprising given its birth as a Lynk & Co concept car.

It's probably the most polarising part of the exterior. The embossed DRLs on top of the bonnet at the far corners, sitting on huge bulges that sink into the bonnet. The extremely bright headlights hang around the middle of the front fascia.

As someone remarked to me "it looks like a robotic frog." I have to admit, I got used to it over the course of a week, but in no way is it a beautifully styled car in the traditional sense. A nice little thing to point out, is that the vents at the lower edge of the fascia are functional, passing air over the front brakes. Probably a good thing with how heavy this thing is. 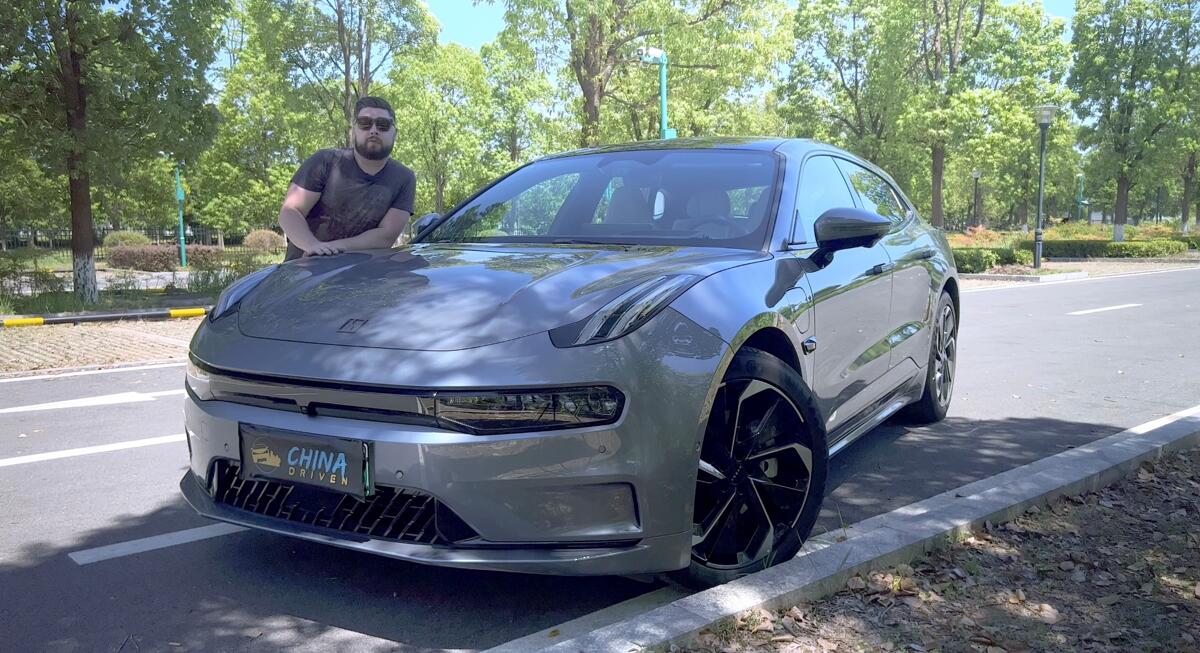 Zeekr likes to call the 001 a "shooting brake," I guess because hatchbacks aren't that desirable in the Chinese market. But honestly, it's a chunky hatchback, and being British, it's my cup of tea.
The belt line is fairly high, trying to give the overall car a sense of a lower roof line, and it does a good job to hide how actually humongous this car is. You'll find some creases down the side on the doors, with a piece of black trim continuing its angular styling.

Honestly, I enjoy the side profile a lot, it's sporty looking with short overhangs front and rear, with that hatchback styling being the cherry on top for me.

The rear continues the Zeekr's sporty styling with a roof-mounted spoiler, a lovely sloping hatch, and a slight lift on the end of the trunk lip. The automatic LED taillights wrap around the corners and across the whole rear giving it a distinctive style.

Some deep-cutting bodywork around the rear reflectors at the bottom and a small styled diffuser all add to the look of this EV. 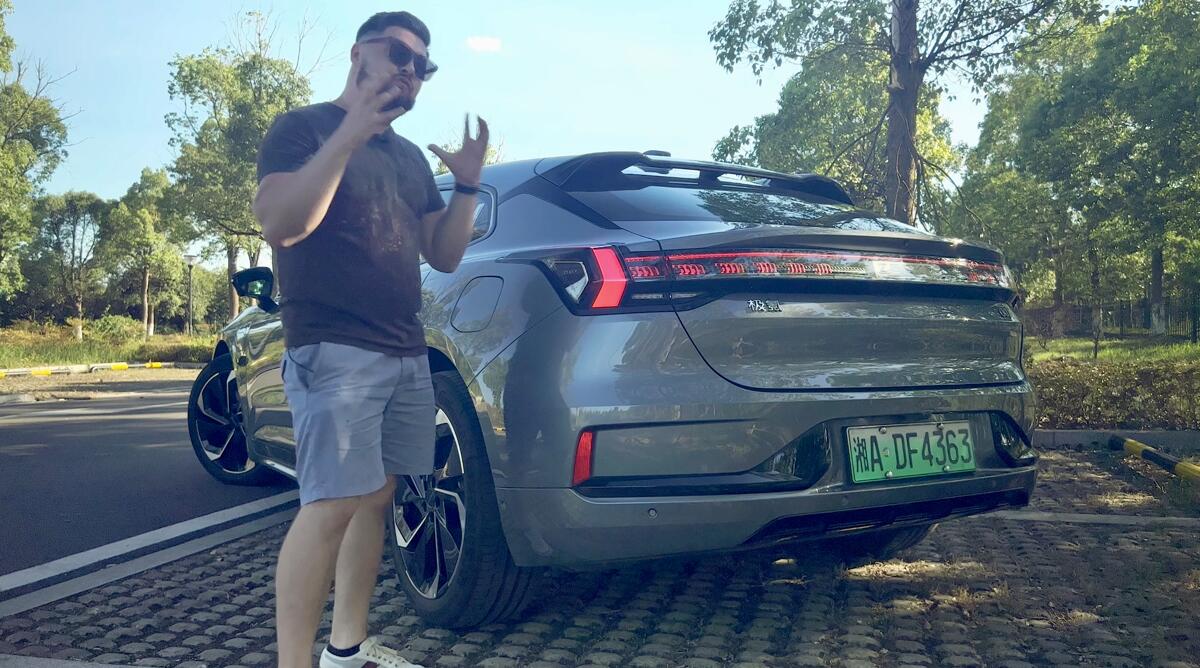 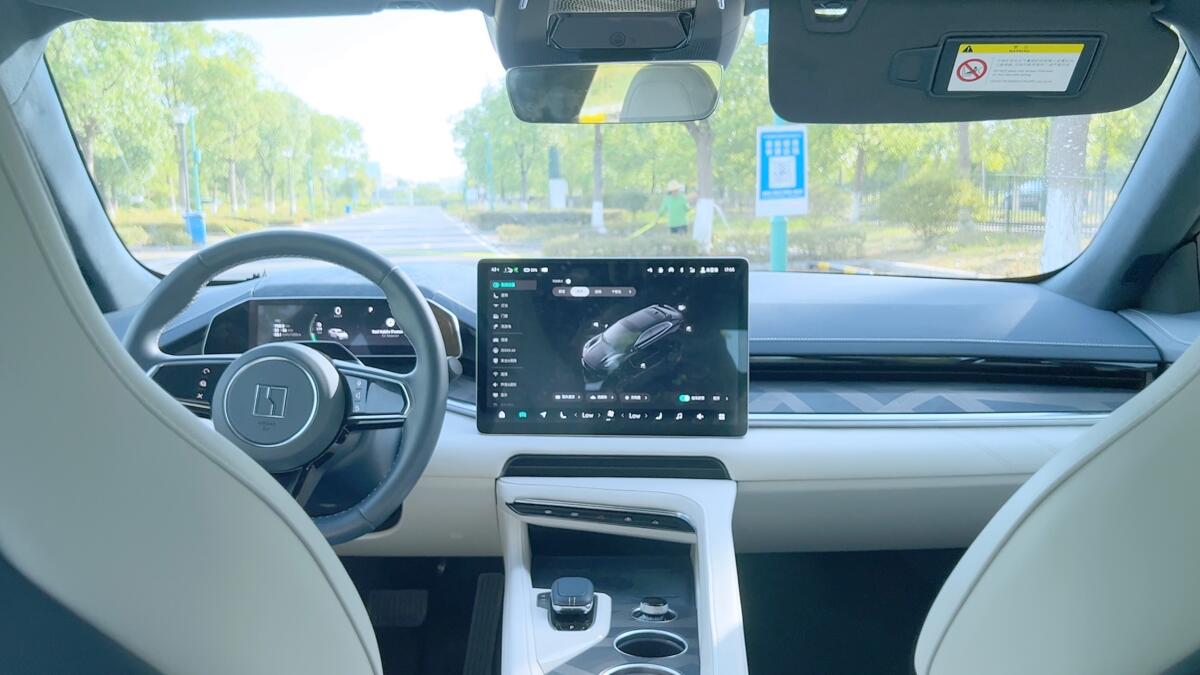 When coming to the conclusion that the AWD base model is probably the best overall EV package on the Chinese market, the interior plays a huge role in that. In one word, premium.

Napa leather everywhere, an Alcantara roof liner and solid metal touch points, the level of materials used in the Zeekr 001 smashes every other EV under 300,000 RMB, it's not even close. The interior is also really well screwed together, with no squeaking, no rattling.

The center console has a grab handle for the passenger, and this creates a more cocooned feeling driver-focused cockpit. The capacitive buttons in the center console are also angled towards the driver adding to the driver's focus.

The multifunction steering wheel features two touch-sensitive pads which change function depending on what you are doing, with their functionality displayed on the bright HUD. 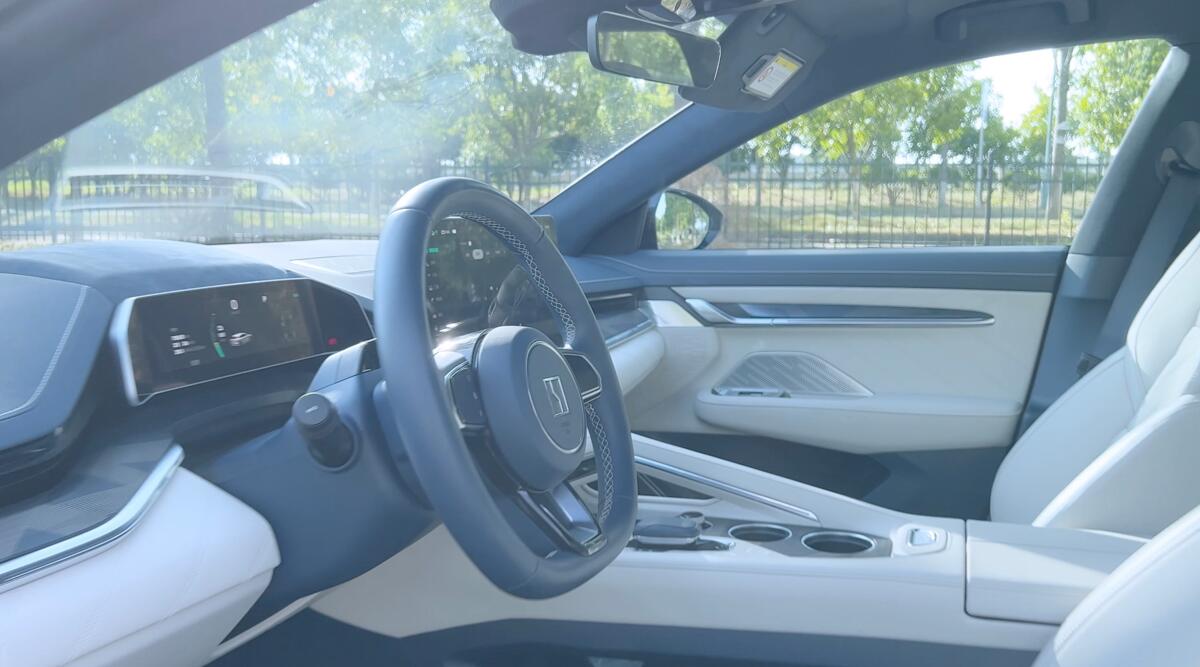 The instrument panel is 8.8 inches, it's super long and narrow, again bright and clear, with wings on the outer ends that display more traditional vehicle warning symbols. These wings wrap a little on the side again giving this sense of cocooned driver focus.

The 15.4-inch infotainment touchscreen does everything you'd expect. It has a customizable Home Screen with moveable app previews, like the sat nav, media & some quick buttons. My particular car had been set up with a quick button to pull the wing mirrors in, which is handy given it's almost 2m wide. However, I'd much prefer a physical control on the switch gauge.

The original Zeekrs were lambasted over their laggy infotainment system which prompted Zeekr to update the hardware to the new 8155 CPU. Supposedly Zeekr is offering a free upgrade to owners of early cars. It's never nice to have a new car being hamstrung out of the gate, but it's nice to see Zeekr attempting to put this right. The system with the 8155 CPU worked flawlessly for me which is good news.

Although no physical a/c controls there is a pleasant knurled metal physical volume knob with push stop/start for media. A really lovely little gear selector with metal knuckling again on the side topped in Napa leather.

The front seats now come standard with heat, ventilation & massage functions, including a massage function called "passionate." I'm still undecided if I really want my car to give me a passionate massage while sitting in traffic.

In the rear of the Zeekr 001, you'll really appreciate its huge 3005mm wheelbase, as rear passengers are treated to a gargantuan amount of legroom. The headroom is decent but might cause issues for those who are over 6ft. 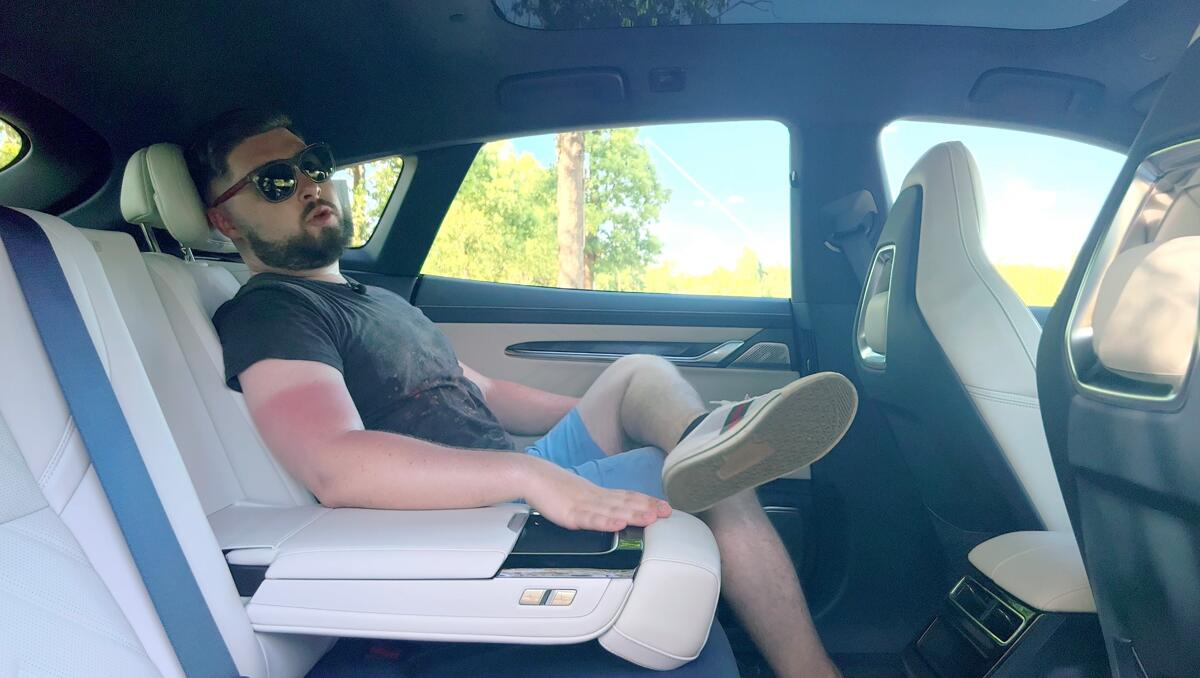 The level of materials in the back equals those in the front, Napa leather, Alcantara & metal touch points. The top model comes standard with a rear touchscreen to control media and its standard 3rd zone a/c.

The rear outer seats are nicely sculptured, covered in Napa leather with a reclining function activated but buttons are found on the side of the wide center armrest.

The passenger side rear is treated to two extra buttons on its switch gauge to push the front passenger seat forwards and angle its seat back, without having to awkwardly lean forward to use controls on the side of the front seat like in most others. 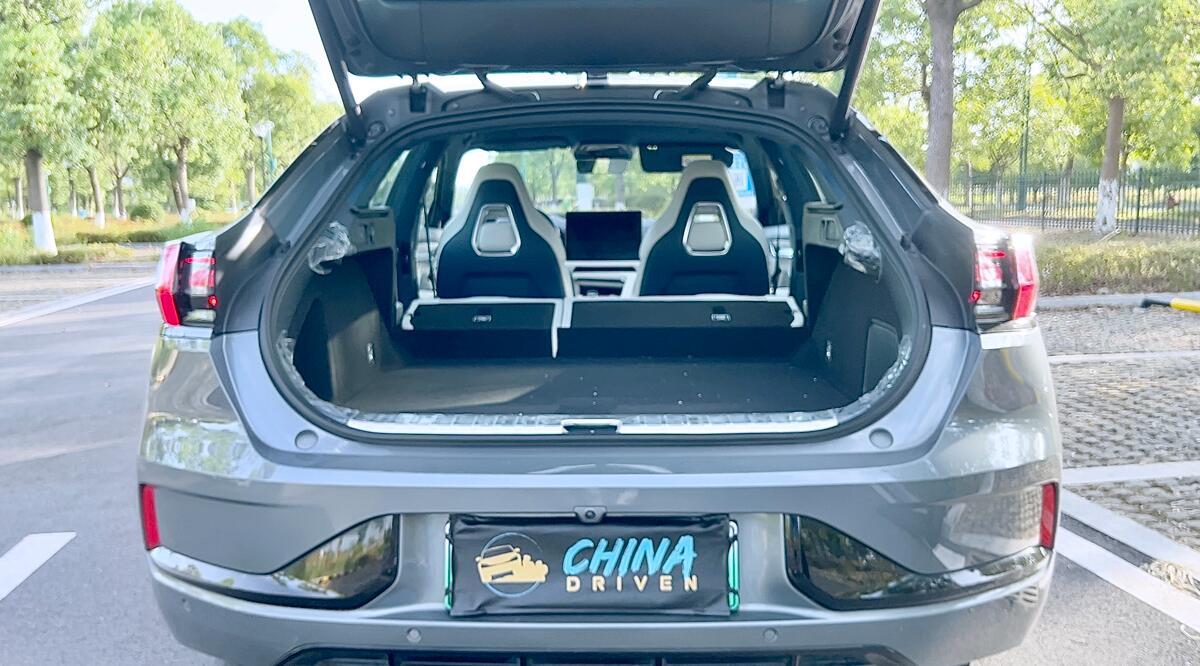 The Zeekr 001 comes standard with a level 2 ADAS system which combines Lane Keep Assist and Adaptive Cruise Control to adjust speed and keep the car in between the lines.

The Zeekr 001 is vision only, not following the recent trend in China of adding lidar to everything. Zeekr says they will be releasing their ZAD (Zeekr Autonomous Driving) suite in the near future, which will be delivered by OTA to those that have opted for that upgrade.

ZAD will come in two levels, Standard and Advance, exactly what differs isn't fully known. We expect both to gain some sort of NOA feature though.

Obviously, it comes standard with a HUD, Voice assistant & 360 panoramic camera with a rotatable 3D model, and a birds-eye view. There's standard 5G connectivity in the car, and it can receive OTA updates.

I'll give a caveat first to what I'm about to say, the Zeekr 001 mid & top models have some stiff competition at their price points. In fact that 340,000-400,000 RMB range is brutal with some really solid contenders.

However, under 300,000 RMB the Zeekr 001 represents an extremely enticing overall package. The interior quality is streets ahead of its competitors at its price. Its 299,000 RMB price point is picked to allow full subsidies for customers, but it's obvious this interior was designed for a vehicle well above 300,000 RMB.

Somehow Zeekr has managed to squeeze it under. The AWD base performance of 3.8s, combined with the premium spacious interior, large trunk, and competitive ADAS for under $43K is a smashing all-rounder EV package, with an option for those who don't care for performance and want longer range.

It might not lead in any one category, but as a package, for its price, it's bloody hard to beat.

XPeng G9 review: A sporty SUV with loads of space, only thing left is pricing